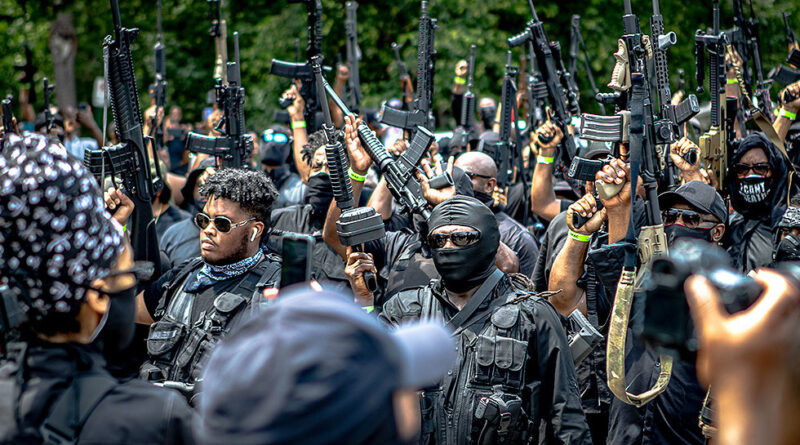 July 18, 2020.- NFAC, the masked, armed black militia that recently marched through a park in Georgia, deems violence and killing an acceptable response to oppression. Their end goal is to break away from the US as their own black-only nation.

The NFAC (Not F*cking Around Coalition) grabbed plenty of attention on social media with a high-profile public debut on July 4. The sight of an all-black militia, clutching rifles and handguns, marching in the heartland of the Ku Klux Klan at Stone Mountain caused plenty of ripples.

But very little is known about them, despite a frenzy of speculation. It’s not even clear when they were created or how many of them there are.

“There’s a misconception that we’re a terrorist group and want to kill white people.”

“We are here to protect the black community, as that’s who is under attack. Nobody is protecting black children, men and women in America. What necessitated the creation of NFAC was the need to address a rising tide of police brutality, of racial brutality, of unfairness in the judicial system,” he said.

“Most of us like me are ex-miliitary, we’re not young people on the block, we’re voters, we’re your responsible guys, we’re the guys with the good jobs.”

Every black person a ‘political prisoner’

While seeing themselves as protectors, Jay has a clear aim of what he wants to achieve – and he’s not playing it small.

He feels that black people need to be split from the rest of the US.

So he says he, and others, are filing an order of liberation with the International Court of Justice.

He explained: “I want them to declare every black person who is a descendent of the Portuguese slave trade a political prisoner of the United States. And to sanction the United States to do one of two things. The first is give us our own land here, so we can go in, set up our own government and the whole nine yards.”

Some have speculated that Jay is demanding the states of Texas as this land, but he only used the Lone Star state as an example. The key is to be given land no longer controlled by the White House.

The other option is more radical, which most media have refused to publish.

Jay revealed: “It’s a glaring fact that mainstream media in the United States has completely ignored the NFAC. ABC News tried to do an interview with me but found the information too scary, so they buried the story as a history piece about Stone Mountain.”

“The mainstream media will not report on us, as images of organized black folks with guns would send shivers down the spine of the racist core of America.”

“My other aim is for an exodus to Africa, to establish our destiny and build our own nation – and get a seat at the UN like everybody else. Forty-five million of us is a nation within a nation, so we can take ourselves to a place where two countries friendly to us are willing to carve out some land.

That would be in Africa, as it’s where we come from, where we have greater numbers, where resources are and I already have relationships with some of the rulers of those countries.

Hypothetically, I want to get an area of about 100 miles on each side, declare it a sovereign zone and build an infrastructure.”

The exodus would only include black people. The NFAC only allow black members, and Jay doesn’t feel this should be a shocking admission.

“Every other entity has their own, we’re the only people on the planet who don’t,” he said.

The riots that broke out after the latest resonant police killing of an unarmed black man, George Floyd, is apparently not what he has in mind. He wants to take things global.

“We have no identity, they call us African Americans but tell me, where in Africa? There are 55 countries in Africa.”

If we have our own country, then if something happens in America, we can go to the UN and say ‘that’s a violation.’

Those with a single black parent could be included but would be investigated by the NFAC along with their “pattern of behaviour.”

‘BLM doesn’t believe in violence. We do’

NFAC hasn’t been spawned by the Black Lives Matter movement. Jay was part of BLM several years ago but grew frustrated by their direction. He feels a more authoritarian approach is the only way forward.

“Black Lives Matter does not represent the sentiments of the black community.We have distanced ourselves from them completely,” Jay admitted.

“BLM doesn’t believe in violence, we do. We chose America’s Independence Day to send that message as we were slaves when that happened, we were not members of this country.

We tried to be here for 247 years, we had reconstruction and they burned our towns down, we had Jim Crow when they set dogs on us and told us we couldn’t sit next to them – we tried that with affirmative action and they rolled that back.

NFAC’s willingness to kill could be why they are shunned by the more mainstream activists. But Jay feels justified as he claims there have been 457 controversial killings since the 2014 police shooting of 18-year-old black man Michael Brown.

“If anybody in our group has a personal agenda and just wants to shoot some people, then we’re not the group for them,” he says, before calmly explaining the rules of engagement:

“But on July 4 before we went to the park my orders were, kill them – not shoot or wound them, kill them.”

Along with the Stone Mountain march, the NFAC held a simultaneous event in Phoenix’s Escobar Park. Since then, Jay claims he’s been flooded by contacts globally and now has NFAC chapters internationally.

However, members’ identities will remain anonymous.

“There’s a vetting process, we inspect them and then they get sworn into the NFAC,” he said.

“We are also a coalition so some existing organizations want to be a part of us too, so we vet their members too.

“We learned our lessons from types of infiltration methodologies.That’s why we’re so secretive about our numbers, that’s why you cannot find out where we train, that’s why we are not as open to giving up the details.”

“The only name or face that is known is mine. I speak, no one else does.”

Back in 2016, Jay ran for president but felt his campaign was purposely sidelined. He regards 2020 contender Kanye as “a political joke” but did reveal some have urged him to run again.

“Since Kanye’s announcement, I’ve received phone calls saying ‘you do know if you run for the presidency right now, you would win hands down,’” Jay said.

“But my mission is not to save America, I tried that and I found out that big money and the media can be bought to block out good candidates. I will not go down that road again.

“My goal is much loftier than that, not only to facilitate the exodus of the black nation here in America but the implementation of what we would call the United State of Africa.”

Since July 4, Jay feels the NFAC had already made a clear difference.

Things in his view have calmed down. “They got the message, there hasn’t been one lynching or police involved shooting since and a wave of unity has swept the black community and we’re seeing the judicial system trying to prosecute the cases.”

While the NFAC is only for blacks, he does encourage other races to support their cause.

Malcolm X said it best, you can help us, but you can’t join us.

“Unless we are by ourselves and until we learn to love ourselves, we can’t love another people. When a people are denied knowledge of their culture and history of self, they have nothing to be proud of.

“Did you see how proud they felt when they saw the movie ‘Black Panther’ which is make believe? Black people are yearning to belong to something, we have got to give them something to belong to. I would rather give my life for something noble like the liberation of my people, rather than to waste it staying alive being a weakling.”

By Chris Sweeney, author who has written for various UK magazines and newspapers, including The Times, The Sun and The Daily Record. Follow him on Twitter @Writes_Sweeney