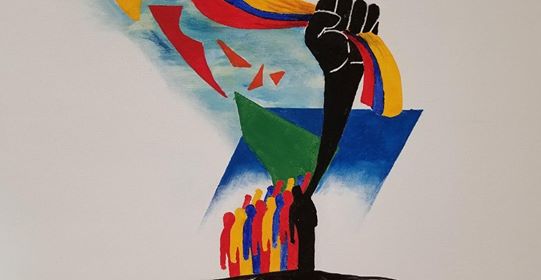 With the participation of the Protection Collective of the Embassy of the Bolivarian Republic of Venezuela in Washington and various social organizations from both countries, in addition to the Vice-minister for North America of the People’s Power Ministry for Foreign Relations of Venezuela, Carlos Ron, this Thursday July 16 The webinar “Strengthening solidarity between social movements in Venezuela and the United States” was held.

During his participation in the virtual meeting, Vice-minister Ron highlighted the meaning of peoples’ diplomacy, evidenced in the action carried out by the American movement to protect the Venezuelan diplomatic headquarters in that country.

The president of the Committee for International Solidarity and the Struggle for Peace (COSI, by its original initials), Carolus Wimmer, highlighted the importance of this cybernetic meeting to know the reality of the peoples, by virtue of the media siege imposed by the transnational communication companies at the service of capitalism; “It prevents the struggles and the victories of the workers and the American people in general from being known.”

He thanked the solidarity that Venezuela receives from the American people, especially from social movements such as the Embassy Protection Collective, an example of active support. He stressed that through the unity plans can be made “to strengthen each other, also thinking of the new generations.”

As part of this recognition, Venezuelan organizations and political and social movements constructed a declaration to thank the solidarity of the American collectives that have been on the march to fight imperialism.

Here is the text:

The Venezuelan people thank the brotherhood and solidarity with Venezuela, especially the Embassy Protection Collective.

From revolutionary Venezuela, we want to extend a solidarity hug and our deep gratitude to the sisters and brothers who make up the brave, conscious and seasoned EMBASSY PROTECTION COLLECTIVE “EPC”, especially to the companions Margaret Flowers, Adrienne Pine, Kevin Zeese, David Paul. All of you have been a great example in the fight for justice that unites the peoples, which is profoundly internationalist and anti-imperialist.

In the framework of a climate of serious aggressions and siege against the Venezuelan people, members of different social, political, pacifist, individual organizations, all of American nationality, proposed to become the Embassy Protection Collective, in order to defend the sovereignty of a brother people against the violation of the wrong American government, within the framework of public international law and the Vienna Convention (on the law of international treaties), between the months of April and May of the year 2019.

More than 60 activists directly involved in this feat came to participate, which has marked an indelible mark in the history of internationalist struggles and solidarity among peoples.

After 33 days of fighting and resistance at our embassy facilities, the US government finally decided to arbitrarily detain the last four protectors who stayed to the end resisting the fascism of the reactionary right, the local police and the secret service.

They lived through the siege and expressions of hatred, suffered physical and verbal attacks, cut off their electricity and water supplies, and blocked the entry of food, all for defending a just principle: the right to self-determination of the peoples.

The protectors faced an illegal trial in a total state of vulnerability, unable to defend their rights and depend on the unfair trial. For example, on February 4, the chief judge of the Beryl A. Howell case issued an opinion on what could be witnessed before the jury. Among the prohibitions were not being able to resort to the constitutional right of the first amendment, nor could they argue that Juan Guaido was not President of Venezuela.

Such request was based on the precedent where no court could go against the presidential decision to recognize who is the leader of a foreign nation, thereby de facto recognizing the fictitious presidency of Guaidó and his alleged ambassador Carlos Veccio who led the groups that wanted to break into the Venezuelan diplomatic headquarters illegally.

These petitions to the court by the US government freed him in addition to the accusation of violation of the Vienna Convention, when the security forces broke into an embassy of a country with a legitimately elected government and that had authorized the presence of the members of the Embassy Protection Collective.

Finally, on June 3, after several months of legal dispute, they faced the final judgment, regarding the charges against them for their courageous action to protect the diplomatic headquarters of Venezuela in Washington DC, since April 14 until May 16 of last year. The sentence was 6 months probation and a $750 fine. That is why today we salute this victory achieved through struggle and dignity.

We also welcome the fact that we are consistent and coherent with our actions, that we allow ourselves to keep advancing in the construction of these indestructible bonds of friendship and mutual solidarity.

We undoubtedly have a common route, let us continue on the path of liberation of the peoples that Commander Chávez bequeathed to us, without ever giving in. WE WILL WIN!