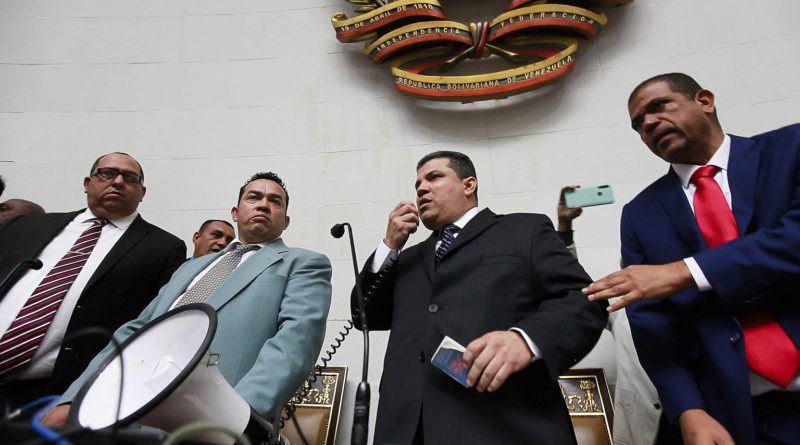 International News
January 13, 2020January 13, 2020 orinocotribune grotesque, i santion you if you vote against the emprire, Luis Parra, Mnuchin, National Assembly, OFAC, US Imperialism, US Sanctions, Venezuela

The United States Department of the Treasury (US) sanctioned on Monday four members of the new board of directors of the National Assembly (AN) – headed by Luis Parra from Primero Justicia (PJ) – as well as other deputies of Parliament -which has been in contempt since 2016- for having voted against the re-election of Deputy Juan Guaidó.

On its website, the Treasury department emphasized that those sanctioned were added to the list of Specially Designated Citizens and Locked Entities (SDN) and to the Office of Foreign Assets Control (OFAC) ).

Similarly, measures were applied to Deputies Adolfo Superlano, José Brito – who proposed the new board of the AN – and Conrado Pérez, who supported the election of the proposal headed by Parra.

The secretary of the US Treasury Department, Steven T. Mnuchin indicated that these sanctions are for “trying to block the democratic process in Venezuela” by opposing the re-election of Guaidó as head of Parliament, by proposing another alternative.

Adolfo Superlano said last week that he and a group of deputies did not agree with the management or the commitment made by Juan Guaidó leading the Parliament, and denounced that the legislator is attacking a group of colleagues, accusing them of being involved in a corruption plot to hide the low levels of popularity that he has had in recent months.

Meanwhile, José Brito has made repeated allegations of corruption in which Guaidó has been involved, along with other deputies of the right-wing bench with the fugitive of justice Rafael Ramírez.

In addition, he directly accused Juan Guaidó of corruption by pointing out that his economic advisor and frontman Rafael Rojas aka “Guava” bought a disco in Madrid, Spain.

While Conrado Pérez, who supported the election of Luis Parra as president of the AN, also accompanied a group of deputies who introduced a document to the Supreme Court of Justice to challenge the amendment of Parliament’s Rules of Debate, promoted by the The Board of Directors of Guaidó in December, and that would allow legislators who are fugitives from Venezuelan justice to vote via the internet.

Mnuchin, quoted by international media, said that “these and other officials can have these sanctions eliminated if they side with the people of Venezuela and Juan Guaidó as their legitimate leader.”