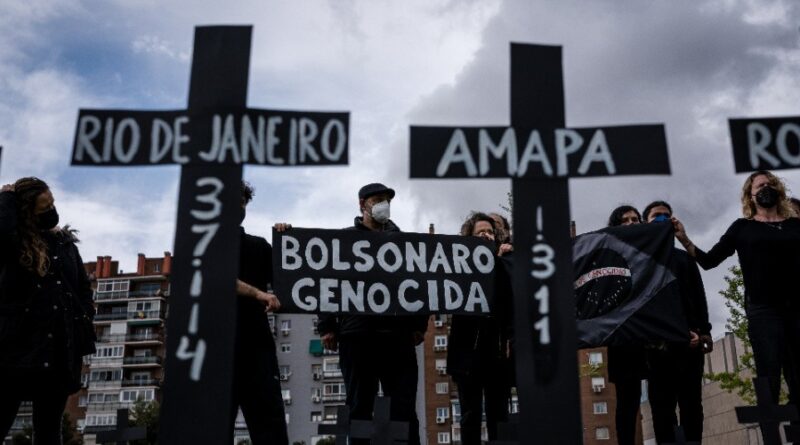 “Unfortunately, our country is today considered a global threat, due to the uncontrolled circulation of the virus and the emergence of new mutations.”

Former Brazilian President Luiz Inácio Lula da Silva on Wednesday called far-right President Jair Bolsonaro a grave “threat to the planet” after the nation’s daily COVID-19 death toll topped 4,000 for the first time since the pandemic began last year, a sign that the public health crisis is worsening as Bolsonaro continues to downplay the virus and undercut potential solutions.

At least 4,195 Brazilians died of the coronavirus on Tuesday and nearly 87,000 new infections were reported as the South American country’s treatment facilities were “stretched to breaking point” by the rapidly spreading virus.

“It must be said that this threat to the planet has a name and a surname: Jair Bolsonaro, a president of the republic who systematically denies science and who ignores the suffering of the people he has sworn to defend.”
—Luiz Inácio Lula da Silva

“It’s a nuclear reactor that has set off a chain reaction and is out of control,” Miguel Nicolelis, a Brazilian doctor and professor at Duke University in the United States, told The Guardian of the worsening COVID-19 crisis in Brazil, which has the second-highest COVID-19 death toll in the world behind the U.S.

With deaths and cases surging, Bolsonaro has persistently refused to consider implementing public safety measures to slow the spread and remained committed to dismissing the severity of the pandemic, which he has previously characterized as a media creation.

In an open letter published Wednesday, Lula—who is expected to mount another presidential bid—wrote that “unfortunately, our country is today considered a global threat, due to the uncontrolled circulation of the virus and the emergence of new mutations.”

“It must be said that this threat to the planet has a name and a surname: Jair Bolsonaro, a president of the republic who systematically denies science and who ignores the suffering of the people he has sworn to defend,” Lula continued.

The former president went on to stress the need for equitable and swift global distribution of the coronavirus vaccine, echoing scientists’ warnings that leaving much of the world unprotected dramatically increases the risk of vaccine-resistant mutations emerging and spreading around the world, rendering first-generation vaccines ineffective.

“We cannot consider living in a world where part of the planet is vaccinated and part abandoned and isolated to be a free field for mutations of the virus,” Lula wrote. “The epicenter of the pandemic cannot be Europe yesterday, today Brazil, tomorrow Africa, with new variants restarting the cycle of death and sadness around the world.”

But “instead of defending immunizations as a public good for humanity,” said Lula, the Bolsonaro government “advocates the private commercialization of vaccines and their concentration in a few companies and countries.”

As The Intercept reported Wednesday, Bolsonaro has repeatedly undermined Brazil’s public vaccination system—widely considered one of the best in the world prior to the COVID-19 crisis—and is currently supporting an effort by right-wing lawmakers to “allow corporations to directly purchase vaccine doses from international suppliers and give them to employees, even before priority groups like the elderly and medical workers are fully vaccinated.”

Under Bolsonaro’s leadership, Brazil has also joined the United States, Canada, and European nations in opposing a South Africa and India-led effort at the World Trade Organization to temporarily suspend vaccine-related patent protections.

“The real tragedy is that Brazil is among the few vaccine-manufacturing countries in the world blessed with world-class vaccine research and production facilities,” Achal Prabhala of accessibsa, an international project focused expanding access to medicines and vaccines, told The Intercept. “If there had been a coordinated federal strategy early on to support the local production of vaccines, Brazil would have been in a very different situation today.”