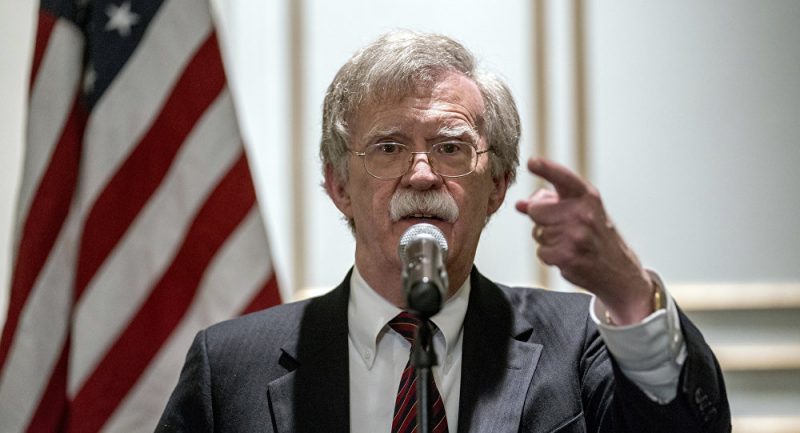 Bolton made the statement as he announced that the US was imposing a new round of sanctions against Venezuela – something that he said should become a warning to “all external actors, including Russia”.

National Security Adviser John Bolton has signalled the US administration’s readiness to use the Monroe Doctrine in its policies towards Latin America.

The Monroe Doctrine, which was announced by US President James Monroe in 1823, aimed to oppose European colonialism in the Americas. The document declared that any action by any European power directed against independent nations in North and South America would be considered hostile by the United States.

“Today, we proudly proclaim for all to hear: the Monroe Doctrine is alive and well”, Bolton told the Bay of Pigs veterans group in Miami on Wednesday, lauding the Americas as an “incredible region” which he said “must remain free from internal despotism and external domination”.

He claimed that “the destinies of our nations will not be dictated by foreign powers” and that “they will be shaped by the people who call this Hemisphere home”.

In early March, Bolton also focused on the issue in an interview with CNN, during which he stressed that the US was applying the Monroe Doctrine to the situation in Venezuela. Russian Foreign Minister Sergey Lavrov at the time slammed Bolton’s remarks as arrogant and insulting.

The Wednesday statement was made as Bolton announced a new spate of sanctions against Venezuela, including those that have been slapped on the Venezuelan Central Bank, a number of companies and nine ships.

According to Bolton, the newly-applied sanctions should become a warning to “all external actors, including Russia”.

Since the beginning of the political crisis in Venezuela, which escalated after Washington recognized opposition leader Juan Guaido as the country’s interim president in late January, the US has imposed several rounds of crippling sanctions against Caracas.

They mainly targeted the country’s oil and banking sectors as well as individuals belonging to the Venezuelan government.

While imposing the sanctions, the US blamed several countries, including Russia, for the political standoff in Venezuela. Secretary of State Mike Pompeo, for his part, accused Moscow of “intervening” and “going against the leadership of the country of Venezuela”.
Russian Foreign Minister Sergei Lavrov responded to criticism by stating that the Russian servicemen had arrived in Venezuela “on an absolutely legitimate and legal basis”, in line with an intergovernmental agreement between Moscow and Caracas.

In late March, an estimated 99 Russian military staff reportedly arrived in Caracas on board two planes, which also delivered 35 tonnes of cargo to the South American country.