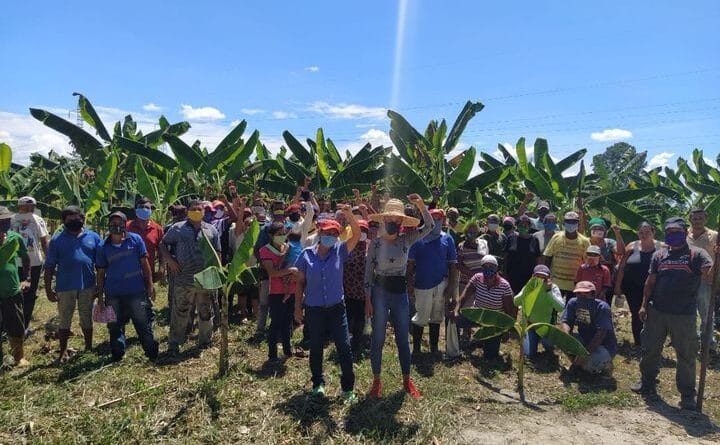 The Popular Revolutionary Alternative looks at one of the most intense land struggles currently in the country.

Isabel Granado is a Popular Revolutionary Alternative (APR) candidate for the upcoming December 6 parliamentary elections in Merida state. She is also a campesino leader in El Trompillo Ranch and was detained twice in four days earlier this month, only to be freed both times following wide-reaching grassroots campaigns. The APR claims that the detentions represent landlord interests with the backing of sectors of the local government. Since being released, Granado has reported death threats against her but has vowed to continue her electoral campaign.

El Trompillo Ranch in the Alberto Adriani municipality of Mérida state and campesino leader and parliamentary candidate Isabel Granado have been the focus of much attention in recent days both by sectors of the State and its security forces and by Venezuelan and global progressive movements.

Beyond going into the details about Granado’s two unwarranted, illegal and irregular arrests by the FAES [special forces] and CONAS [anti-kidnapping special forces], the abuse and death threats, the officers’ mistreatment of her young daughter and her determination to go on, this article aims to explain the struggle which she represents, the struggle that caused such a fierce reaction from sectors of the State and the bourgeoisie, and the struggle which led to the Popular Revolutionary Alternative (APR) – with the ticket of the Communist Party of Venezuela (PCV) – to promote her as a candidate for the December 6 [parliamentary elections].

The land dispute over the former San Miguel La Trinidad El Trompillo estate began in 2008, when [the National Land Institute] INTI declared its 770 hectares to be idle land in accordance with the Land and Agricultural Development Law (LTDA) and its low productive levels.

This idle sentencing was reiterated in 2010 following another government inspection, but it was more recently, in 2018, that the rescue of the land began at the request of the Regional Land Bureau Workers Council in Mérida.

The Campesino Council La Mano Poderosa de Dios, its general coordinator Isabel Granado, and other campesino movements also active in the San Miguel–El Trompillo Ranch entered the homestead in May 2019 with an eye to restoring justice and reactivating production from within, in accordance with national interests and laws. However, this action provoked a violent response from the historic owner Alejandro Bueno Castro and his red-tainted allies.

In what constitutes a clear attempt by the INTI to resolve this conflict in favour of the large landowner and not the people, the property was violently stormed by the National Bolivarian Guard (GNB), the National Bolivarian Police (PNB), the Special Action Forces (FAES) and the National Anti-Kidnapping Command (CONAS) just 10 months later, in March 2020. On that day, Niloha Delgado, legislator of the Regional Legislative Council, and local Mayor Mezin Abou Assi, both of the [ruling United Socialist Party] PSUV, were present. The storming of the property, which brought about the eviction of more than 300 families and intentionally destroyed all short crop cycles in production, was carried out under the false flag of widespread paramilitary presence at the site, with authorities assuming this to be true without the slightest effort to demonstrate any evidence to support it.

During this process, with the poor people on one side and the “revolutionary bourgeoisie” (using the much criticised phrase of the Land and Agricultural Production Minister) on the other, the PCV Mérida immediately voiced its solidarity with the campesinos. A few days after this, the PSUV Mérida appointed Niloha Delgado, who participated in the storming of the ranch, along representatives of the [Great Patriotic Pole pro-government umbrella organisation] GPPSB, to liaise with the campesinos at the ranch without much success.

Four months later, the INTI revoked its own declaration of idleness of the ranch and irregularly awarded the Productive Farm Certificate to the alleged owner, opening the way for the land to be returned to him and for the resolution of the contradiction in favour of the bourgeoisie.

With this new blow to the right to land access, and considering the clear intentions of the Land and Agricultural Production Ministry and the INTI, the La Mano Poderosa de Dios Campesino Council, legally constituted with its spokespersons and representing 125 families, has gradually returned to the property. Currently, it occupies 238 hectares, of which almost 50% have been re-sown after the destruction of the harvest in March. There are approximately 200 hectares occupied by three other campesino councils that are also in production with short cycle crops, and 332 hectares occupied by the landowner and his workers.

To bring attention to this fair struggle, the Popular Revolutionary Alternative (APR) with the ticket of the Communist Party of Venezuela (PCV) made its candidatures to the National Assembly public in September of this year and incorporated the young Isabel Granado (list candidature) and agronomist Nakary Pérez (circuit 1 candidature), who has been offering technical assistance to the Campesino Council for more than a decade, to the ballot.

A few days after the electoral announcement, Granado was unlawfully arrested, first by the FAES and then by the CONAS. Clearly her candidacy has disconforted both Bueno Castro, the landowner, and those who are quietly trying to take the land away from the people.

Throughout Venezuela but particularly in Merida state, the struggle for the land touches many personal interests, including civilians, military personnel, political interest, and, above all, economic interests. While some seek to take the land (or re-take it) to fill their pockets, the revolutionary campesinos look to produce food for the people at this time of economic crisis, ensuring the well-being of a sector of the population which has historically been mistreated and excluded.

Their struggle is a class struggle. The dialectical relationship and the contradictions which exist between two antagonist forces become visible. It leads campesinos on a path of direct confrontation with the bourgeoisie. Like any confrontation with the bourgeoisie, the struggle has provoked a backlash, and in this case it has become visible through the the illegal detention of Isabel Granado, but it can also be seen in thousands of examples in recent years, such as in the case of Joaquín Monterrosa, a campesino leader from the nearby El Caiman Ranch who has been illegally detained since August in Mérida.

In addition to these cases, we can point to frequent bourgeois-driven and mostly unpunished assassinations of campesino leaders since the reforms to the Land Law in 2010, including the 2018 murders of Luis Fajardo and Javier Aldana in Caño Rico in the South of the Lake region in Merida, which happened with the complicity of sectors of the state, and over 300 similar cases since 2013.

The campesino struggle exposes the interconnected network of corrupt sectors, politicians, bureaucrats and reformers, both civilian and military, who seek to preserve the bourgeois structure and slow the advance towards a fairer society. According to the Land and Agricultural Production Minister, there are 10 million non-productive hectares in the country. If that is so, why lash out at those campesinos who are producing? Is it fear of the example?

Finally, the struggle reveals the gap between the propaganda and the actions by certain sectors of the State apparatus. While some “leaders” talk about stimulating production, defending the poor, or fighting vices, their actions prove otherwise. Where are the pronouncements of these “leaders” in favour of the poor in El Trompillo? As it turns out, their silence is more revealing.

For these reasons and many others, the political forces that make up APR Mérida took the decision to promote the voice of the poor, of the people who toil in the fields every day and the people who produce. It is time for a revolutionary path out of the capitalist crisis. It’s time to build hope.