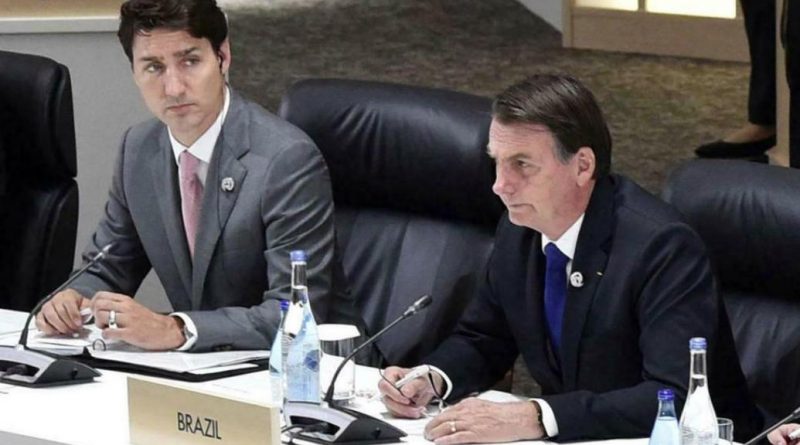 By now most environmentally conscious people understand that Jair Bolsonaro is a bad guy. Brazil’s president has scandalously blamed environmentalists for starting fires burning in the Amazon region, after having called for more “development” of the huge forests.

Canadians are lucky we have a prime minister who is not such an embarrassment and understands environmental issues, right?

While Justin Trudeau has called for better protection of the Amazon, his government and Canadian corporations have contributed to the rise of a proto-fascist Brazilian politician who has accelerated the destruction of the ‘planet’s lungs’.

In 2016 Workers Party President Dilma Rousseff was impeached in a “soft coup”. While Canadian officials have made dozens of statements criticizing Venezuela over the past three years, the Trudeau government remained silent on Rousseff’s ouster. The only comment I found was a Global Affairs official telling Sputnik that Canada would maintain relations with Brazil after Rousseff was impeached. In fact, the Trudeau government began negotiating — there have been seven rounds of talks — a free trade agreement with the Brazilian-led MERCOSUR trade block. They also held a Canada Brazil Strategic Dialogue Partnership and Trudeau warmly welcomed Bolsonaro at the G20 in June.

Bolsonaro won the 2018 presidential election largely because the front runner in the polls was in jail. Former Workers Party president Lula da Silva was blocked from running due to politically motivated corruption charges, but the Trudeau government seems to have remained silent on Lula’s imprisonment and other forms of persecution of the Brazilian left.

With over $10 billion invested in Brazil, corporate Canada appears excited by Bolsonaro. After his election CBC reported, “for Canadian business, a Bolsonaro presidency could open new investment opportunities, especially in the resource sector, finance and infrastructure, as he has pledged to slash environmental regulations in the Amazon rainforest and privatize some government-owned companies.”

Canada’s support for right-wing, pro-US, forces in the region has also favored Bolsonaro. Since at least 2009 the Canadian government has been openly pushing back against the leftward shift in the region and strengthening ties with the most right-wing governments. That year Ottawa actively backed the  Honduran military’s removal of social democratic president Manuel Zelaya. In 2011 Canada helped put far-right Michel Martelly into the president’s office in Haiti and Ottawa passively supported the ‘parliamentary coup’ against Paraguayan president Fernando Lugo  in 2012. In recent years Canada has been central to building regional support for ousting Venezuela’s government. The destabilization efforts greatly benefited from the ouster of Rousseff and imprisonment of Lula. Brazil is now a member of the Canada/Peru instigated “Lima Group” of countries hostile to the Nicolás Maduro government.

Ottawa has long supported the overthrow of elected, left leaning governments in the hemisphere. Ottawa passively supported the military coup against Guatemalan President Jacobo Arbenz in 1954 and played a slightly more active role in the removal of Dominican Republic president Juan Bosch in 1965 and Chilean president Salvador Allende in 1973. In Brazil Canada passively supported the military coup against President João Goulart in 1964. Prime Minister Lester Pearson failed to publicly condemn Goulart’s ouster and deepened relations with Brazil amidst a significant uptick in human rights violations. “The Canadian reaction to the military coup of 1964 was careful, polite and allied with American rhetoric,” notesBrazil and Canada in the Americas author Rosana Barbosa.

Along with following Washington’s lead, Ottawa’s tacit support for the coup was driven by Canadian corporate interests. Among the biggest firms in Latin America at the time, Toronto-based Brascan (or Brazilian Traction) was commonly known as the “the Canadian octopus” since its tentacles reached into so many areas of Brazil’s economy. Putting a stop to the Goulart government, which made it more difficult for companies to export profits, was good business for a firm that had been operating in the country for half a century. After the 1964 coup the Financial Post noted “the price of Brazilian Traction common shares almost doubled overnight with the change of government from an April 1 low of $1.95 to an April 3 high of $3.06.”

The company was notorious for undermining Brazilian business initiatives, spying on its workers and leftist politicians and assisting the coup. The Dark side of “The light”: Brascan in Brazil notes, “[Brazilian Traction’s vice-president Antonio] Gallotti doesn’t hide his participation in the moves and operations that led to the coup d’état against Goulart in 1964.”

Gallotti, who was a top executive of Brascan’s Brazilian operations for a couple decades, was secretary for international affairs in the Brazilian fascist party, Acao Integralista. Gallotti quit the party in 1938, but began working as a lawyer for Brascan in 1932.

Historically, Canadian companies empowered fascists in Brazil. Today, corporate Canada appears happy to do business with a proto-fascist trampling on Indigenous rights and fuelling climate chaos. Ottawa has also enabled Bolsonaro. At a minimum the Trudeau government should be pressed to follow French President Emmanuel Macron’s call to suspend free-trade negotiations with MERCOSUR until Bolsonaro reverses his wonton destruction of the earth’s ‘lungs’.

Yves Engler’s latest book is ‪Canada in Africa: 300 years of Aid and Exploitation.