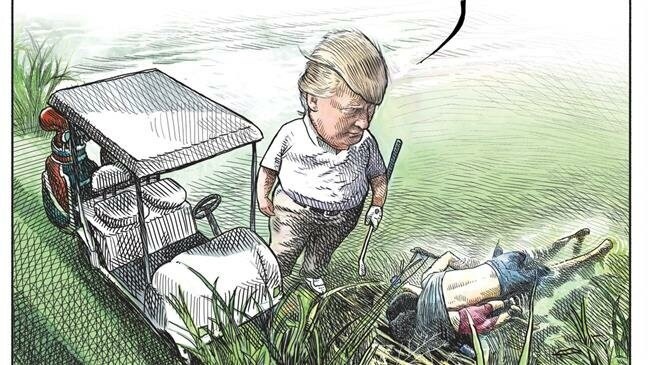 A publishing company in New Brunswick, Canada, has terminated its contract with cartoonist Michael de Adder after a drawing he did of President Donald Trump standing over the bodies of two drowned migrants went viral on social media.

The drawing, which was posted on de Adder’s Twitter account on June 26, shows Trump standing beside a golf cart, golf club in hand, looking down at the bodies of a father and daughter who drowned in the Rio Grande while trying to cross from Mexico into Texas. Trump asks, “Do you mind if I play through?”

The illustration is based off the searing photo of Óscar Alberto Martínez Ramírez, 25, and his 23-month-old daughter, Angie Valeria, lying face down in the muddy waters of the Rio Grande, which has sparked outrage and become a focal point of the debate over asylum-seekers.

De Adder announced his termination from the newspapers owned by Brunswick News Inc. on Twitter.

RELATED CONTENT: Image Causing Outrage Around the World: a Salvadoran Migrant and his Baby Die Embracing Each Other Trying to Reach the US

“The highs and lows of cartooning,” he wrote. “Today I was just let go from all newspapers in New Brunswick.”

Brunswick News Inc. said in a statement on Sunday it is “entirely incorrect” to suggest the company canceled its freelance contract with de Adder over the cartoon.

“This is a false narrative which has emerged carelessly and recklessly on social media,” the company said. “In fact, BNI was not even offered this cartoon by Mr. de Adder. The decision to bring back reader favourite Greg Perry was made long before this cartoon, and negotiations had been ongoing for weeks.”

De Adder said he was “not a victim” and that this was “a setback not a deathblow.”

The New Brunswick native also said that he was still drawing cartoons for other publications, but was hurt that he would no longer be doing so in his four local outlets.

RELATED CONTENT: Migrants in Honduras: Saving to Pay the Next Coyote

“I just need to recoup a percentage of my weekly income and get used to the idea I no longer have a voice in my home province,” he wrote.

De Adder, who did not immediately return NBC News’ request for comment, wrote in a tweet Sunday that he would be “off the grid for the day.”

Wes Tyrell, President of the Association of Canadian Cartoonists, claimed de Adder was fired after 17 years with Brunswick News Inc. because Donald Trump was a “taboo subject” for the company.

“Although he has stated there was no reason given for his firing, the timing was no coincidence,” Tyrell said in a lengthy statement on Facebook. “Michael de Adder has drawn many well-documented cartoons on Trump, they have however, systematically never been seen in the NB papers.”

Previous Trump cartoons by de Adder probably went unnoticed by the company, Tyrell said, but this one went viral thanks to social media celebrities such as George Takei and ultimately led to his contract being terminated.

Tyrell says that, although Brunswick News Inc. is a Canadian company, its business ties within the United States influenced their decision.

“Trade has been an issue since Trump took office,” Tyrell said. “And the President himself is an unknown quantity who punishes those who appear to oppose him.”