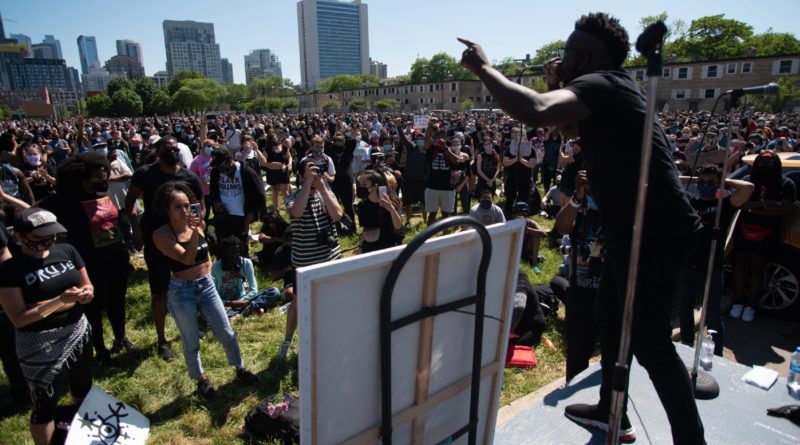 NEAR WEST SIDE — An estimated crowd of 30,000 gathered Saturday in protest of police brutality and racial injustice, holding a rally on the Near West Side before streaming through streets for a second rally on the Near North Side.

The massive group first packed Union Park at 1501 W. Randolph St. late Saturday morning, one of several protests planned throughout the city this weekend in the wake of the police killing of George Floyd in Minneapolis.

The organization “Activate: Chi” put the event together just four days prior. Dom Brown of Activate: Chi reminded the throngs of protesters in the afternoon that the rally was not just about a hashtag — but rather that going forward participants must do what they can to denounce racism.

After activists spoke to the crowd at Union Park, the protest headed north on Ashland Avenue to Division Street and then Clybourn Avenue. It finally reached a large open field at Hudson Avenue and Oak Street near Seward Park, where the crowd gathered for more speeches.

The crowd was estimated at 30,000 or more, said Glen Brooks, the director of Community Policing for the Chicago Police Department. In the crowd were 90 volunteer medics there to help assist anyone in need of help, per organizers.

Jordan Mahome of Bronzeville was present at Saturday’s rally with Nicholas Merchant of Hyde Park and her brother, Lance.

“I felt it was something I could not not do anything about. … I thought it would be nice to join the protest as well,” Mahome said.

She had been participating in activism virtually over the last week through signing petitions and donating, but was able to convince her parents to let her go to the gathering.

“It is important to be out here because it shows that sometimes you need to just act,” Lance Mahome said.

The march and rallies remained peaceful throughout and there had been no arrests. As the thousands gathered, music was played, some read poetry on stage and sang.

Prior to the event, organizers sent a list of demands to the nearby Chicago Police district commanders, asking that riot gear not be worn, that there would be a limited presence at Union Park and that there was no obstruction. Organizers excitedly announced that all demands were complied with, citing that it is possible to collaborate.

“This has been an amazing gathering – a peaceful gathering. But I’m telling you again, our work is not done,” Brown said to the protesters. While on the microphone, he asked the officers present to denounce “the systematic oppression and corruption in your office” going forward.

Sheeno Singleton and Cheton Jackson came to Chicago from Schaumburg to participate.

“It’s really good to see everybody coming together and be peaceful, so they can see that if this is being broadcasted on the news … that it’s not all about violence, that we want to change but we can do it in a peaceful manner,” Jackson said.

Singleton says the murder of George Floyd was “an incident in a long line of incidents just like it,” saying it feels like it’s time for police to be held accountable the same way regular citizens should.

Seeing the thousands of people standing together today showed Singleton that what he has been feeling about the need for change and unity for so long is finally being felt widespread while exposing injustices.

The rally ended in the Near North Side, with buses taking some protesters back to Union Station, organizers said.

RELATED CONTENT: George Floyd’s Death is a Failure of Generations of Leadership

Organizers of Activate: Chi set out a list of demands to rally around:

Check out more photos from the rallies here:

Featured image: Organizers speak to the roughly 30,000 protesters at an empty near Cabrini-Green during the #ActivateChi Chicago March of Justice on Saturday, June 6, 2020. COLIN BOYLE/BLOCK CLUB CHICAGO