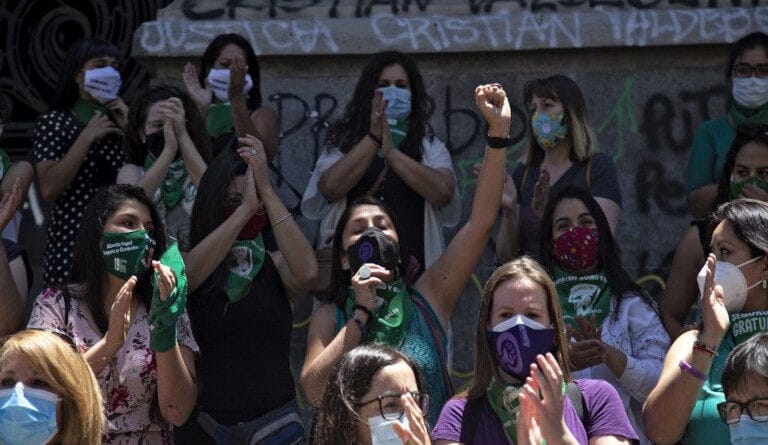 This Wednesday, peaceful protests led by women demanding the legalization of abortion were held in Santiago, as Congress began discussing the decriminalization of the laws regarding abortion in cases less than 14 weeks into pregnancy.

The protests were concentrated in the center of the Chilean capital, where more than 200 women gathered near the government palace of La Moneda. On their necks hung green scarves, symbols of the feminist resistance that has spread throughout Latin America in support of the sexual and reproductive rights of women.

Chile was one of the few nations that did not allow the interruption of pregnancy under any circumstances, after the dictator Augusto Pinochet prohibited it in the last year of his dictatorship (1973-1990).

Only in 2017 was a law enacted in the country that allows abortion in only three cases: a risk to the life of the mother, because of rape, or when the fetus will not survive the pregnancy.

These cases include only 3 percent of the thousands of clandestine abortions performed each year in the country, say social movements that consider the current legislation insufficient.

The protests occurred on the same day that Congress, located in the port of Valparaíso (in the center of Chile), began discussing a bill that seeks to decriminalize abortion up to 14 weeks into the term.

This proposal, presented in 2018 by opposition deputies, aims to prevent the jailing of women who opt for an abortion less than 14 weeks into their term.

Outside of Congress, incidents between pro-abortion movements and pro-life groups were reported, forcing the police to intervene and disperse the groups.

“Yesterday it was the girls, today it will be the goats (girls),” indicated a banner, a reference to the demonstrations of Argentine women that took place outside the Congress in Buenos Aires, which legalized abortion last December.