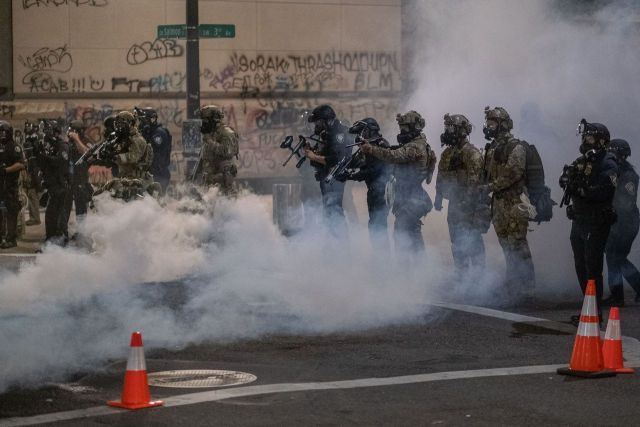 July 22, 2020.- The cops are violating the Constitution by attacking people exercising their basic rights  — that much is obvious. The rounding up of random protestors because they “fit the description” is related to the discriminatory policing that has historically denied poor, Black, and Brown people their basic rights because they “fit the description.” It’s a form of collective punishment outside the rule of law.

The very existence of the new uniformed secret police violates our rights. But, there have been so many assaults and exceptions to the Constitution, it cannot seriously be called the “highest law of the land.” Instead, the use of secret police should reveal to us a deeply entrenched and systemic tyranny that is the political blowback from empire. In fact, we are now ruled by a system of principles and practices that are nothing short of a new imperial constitution.

Yes, the empire delivered the death blow against the Constitution and the republic it defined. But we cannot know how the murder was committed without inspecting the body. My years as a teacher made it clear that most people had never actually read the founding documents. How do we expect to transform something we do not know?

Great artists innovate new forms of art when the existing forms no longer express the times they live in or the visions they have for the future. But at the same time, the act of creation comes from knowing and mastering the older decaying forms. This is also true of the political innovations we call revolutions.

In its original form, the proposed Constitution was still unacceptable to the minority white male electorate because nothing listed the rights of the people to protect them from the power of the state. The Bill of Rights was added by popular demand and without it the Constitution would not have been ratified. Those rights were listed in the Bill of Rights — but not granted or created by it — since they were “natural rights” beyond the legitimate power of any government to either confer or revoke. It’s not that the Bill of Rights ever worked well, it didn’t. But it did work as contested terrain to struggle over.

The first Constitution created a republic in form but one that allowed very limited democratic power even for the newly enfranchised white artisans, small farmers, and workers. The “Three/fifths Compromise” of the original Constitution institutionalized slavery, conquest, and the white supremacy that had been taking shape since the first Europeans arrived.

For the last seventy years, even the remaining form of the republic has been irreversibly damaged by war and empire. And as with racism, institutional structures tell the real tale. After 1950 or so Congress surrendered its constitutional power to declare war and the imperial presidency quickly took over. The people surrendered too — bullied or conned into obedience by the fear merchants of cold war anti-communism.

In short order, we had standing armies, secret police, and the military-industrial complex. All real power was quickly centralized into the executive branch. There were important milestones when that power was further consolidated: 9/11, the War on Terror, the Patriot Act, various NDAA’s, the militarization of the border, ICE attacks on immigrants, the attacks on Occupy and Standing Rock, to name a few. Mass incarceration and the militarization of police were the final jewels in the imperial crown. The systematic tyranny of the imperial constitution was ready-made and waiting for a president like Trump.

But, in fact, every President since 1950 has been a war criminal and a tyrant by definition: their power was in violation of the rule of law. And, this monster executive branch includes the rapidly growing police forces — uniformed and secret — and the new form of secret but uniformed police that have appeared in DC, Portland, and Columbus. There are eighteen secret police forces in all.

In the past cops often hid their badges before committing crimes — now we have entire police forces that both violate, and are immune from, the rule of law by their very nature. If not intent on committing crime why would police need immunity from the law they claim to enforce?

But the rubber bullets, sticks, and chemical weapons reveal weakness. Would they resort to violence if other forms of social control were working to maintain order? Or is this a domestic replay of the military’s strategy of “full-spectrum dominance?” Do they simply see all forms of dissent as a challenge to their power? All of the above?

We now face an interlocking crisis of existential proportions: climate change, extreme wealth and political inequality, perpetual war and empire, the merger of the corporation and the state, the collapse of democracy, and the ramping up of racism and patriarchy necessary to weaken the people. These crises cannot be faced let alone solved by the existing order because they are the existing order.

We now have no choice but to create a new democratic system or else the interlocking crisis will come crashing down on all of our heads. Democracy will take many forms but massive protest movements that reveal and challenge the illegitimate power of the state is a huge step in the right direction. And, the secret police and the militarized police forces are the front lines of unlawful and illegitimate state power. That is why we see the good cop/ bad cop efforts to co-opt the movement with one hand and to crush it with the other. That is why Trump and the executive branch he now personifies have no choice but to double down.