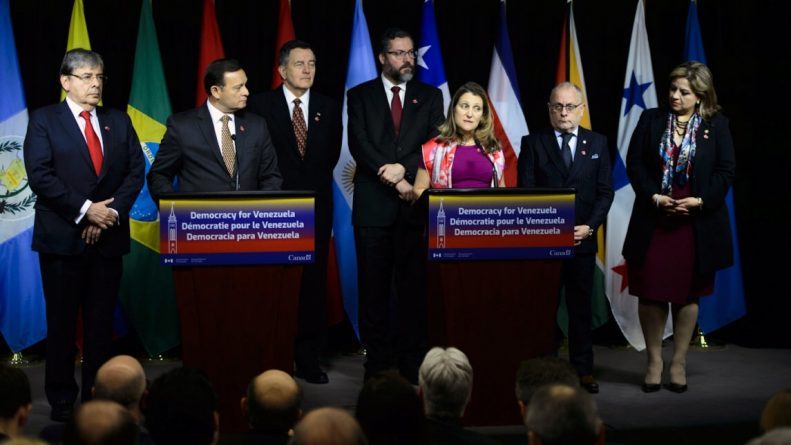 Canada has a vested interest in Venezuela because of its private mining companies, notably Crystallex and Canadian multinationals are already well-entrenched in several Latin American countries.

Canada’s government has now officially recognized Juan Guaidó of the “Voluntad Popular” Party as the leader of Venezuela. This support, in tandem with the EU, follows U.S. President Donald Trump’s immediate recognition of Juan Guaidó’s violent opposition party, and Guaido as the Interim President of Venezuela.

Canada’s foreign minister, Chrystia Freeland, has expressed support for the ongoing coup in Venezuela. Last week, Canada hosted a summit for the Lima Group to discuss Venezuela’s future. The meeting included over a dozen Latin American member states. Its goal is to pressure Venezuelan President Nicolas Maduro into resignation while building support for right-wing position leader Juan Guaidó, who was declared a full member of the Lima Group during the summit.

While Maduro was calling on Venezuelans to unite in the face of the U.S.-backed coup, the Lima Group announced a 17-point declaration that included a call for the “national armed forces of Venezuela to demonstrate their loyalty to the interim president [Guaidó] in his constitutional functions as their commander in chief.”

He [Maduro] is likely to stay in power as long as he possibly can. So it really will depend on others in Maduro’s administration and in the security forces abandoning him and not he, himself, deciding to run off into the sunset.”

Freeland, for her part, believes that a peaceful transition is “absolutely” possible. Experts on Venezuela say otherwise. She has been reluctant to offer military support to the opposition in her statements but seems quite sure that Maduro will step down at some point. She has called for the military to switch its allegiance to Guaidó though, aside from a few defections, the military has stayed loyal to Maduro.

Canada has a vested interest in Venezuela because of its private mining companies, notably Crystallex. Canada-based multinationals are active in several Latin American countries.

The mining and banking industries of Canada consistently oppose governments’ attempts to rule in the interests of their people, for example by attempting to nationalize their natural resources.

By providing financial and legal support for these companies’ labor and agricultural sectors, these many countries become grossly indebted to Canadian industry. This has led to protests in Mexico, Peru, Bolivia and Guatemala that have prompted harsh responses from local police and military forces.

Canadian corporate interference in Venezuela was in full swing when the Canadian mining company Crystallex, and other transnational firms, received a judgment in their favor stating that they could seize the assets of Citgo, the state-owned oil and gas company of Venezuela.

In the judgment, the corporations were: “looking to claim $1.4 billion worth of compensation awarded in 2014 for the 2008 expropriation of the Las Cristales mining installations by the government of Hugo Chavez.” This is a result of backlash from the nationalization of Venezuela’s mining sector in 2008 by the former president.

Canada’s support for the ongoing coup in Venezuela would allow the Canadian government to collect on this judgment and to expand its corporate influence over Venezuela’s rich natural resources.

Nick Rehwaldt is a MintPress News intern. He is an author, artist, and standup comedian focused on political issues, with much of his material ripped from the headlines on any given week. He’s also a proud non-voter and global citizen who happens to live in the U.S.