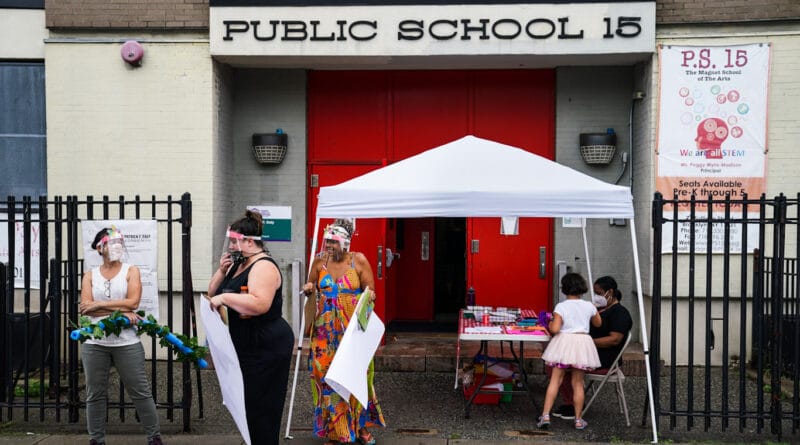 Rather than attack the government for its poor handling of the COVID crisis, corporate media have opted for a return to a favorite pastime of theirs: union bashing.

The seven-day average COVID death toll hit an all time high yesterday, with over 3,400 Americans expected to die on any given day. Educator cases are on the rise. Studies have shownthat children are as likely to contract and pass the coronavirus on as adults, making schools potential super spreading hotspots. As a result, European nations like the United Kingdom, Germany, Ireland, Austria, Denmark, and the Netherlands are shuttering schools, despite, in many cases, having lower infection rates than the U.S.

President Biden, however, is pushing forward with a new plan to achieve a near full reopening within his first 100 days in office. And the media are attacking teachers for raising doubts about the program.

Leading the charge was the New York Times. “Schools Were Set to Reopen. Then the Teachers Union Stepped In,” ran its (since altered) headline, presenting the “powerful” New Jersey teachers association as spoilsports “disappointing” parents and officials alike, despite noting that cases are spiking across the state and that teachers have not been offered preferential access to a vaccine. “We are so sad,” one mother of two told the newspaper.

Perhaps "then an uncontrolled deadly pandemic continued" would be a better way to frame this pic.twitter.com/YK6Qey4RTs

“The simple truth,” wrote Rory Cooper in the Washington Post, is that the “school system wants the benefits of heroism without taking a heroic action.” “Real harm is being caused to [the children], and it’s by the people meant to look out for them. And they want that harm to continue for another year,” he fumed. Cooper went on to accuse the pampered teachers of using “insulting and bad faith arguments,” that are, “not supported by science.”

While the Post notes that Cooper worked for former Republican House Majority Leader Eric Cantor, it did not remind readers that he is a notorious climate change denier who voted against every single piece of climate legislation while in office, nor that Cantor made “standing tall against teachers’ unions” a priority during his time in office. Thus, Cooper’s claims of being a good faith actor purely motivated by science are questionable.

“Your kid might not return to a classroom this year. Are teachers unions to blame?” asked a USA Today headline on Monday, before making clear that the answer was most likely “yes” in the body of the article.

The phrase “powerful teachers unions” seems to get used in pretty much every single NY Times article. Even when there are other factors at play such as inadequate facilities, teacher shortages, and lack of transparency from administration. https://t.co/3yPqRGucYA

The conservative press was even more hostile. Libertarian outlet Reason denounced unions as demanding a “big bribe” from the government, and “fighting to draw pay while kids languish with substandard remote offerings.” The National Review went further, describing the teachers’ union as handing the country a “ransom demand” — a phrase almost entirely reserved for bank robbers or those engaged in the highest criminal activity. While presenting itself as truly caring for the educational needs of inner-city children, it also insisted they go back to schools, on the grounds that they are “not particularly dangerous environments.” Unsurprisingly, Fox Newsalso ridiculed the teachers.

Considering the coverage, one might assume that there is a great deal of nationwide resentment towards teachers and a thirst for a return to in-person learning. However, a December survey showed that Americans favor online-only teaching over classrooms at a 2:1 ratio, with fewer than a quarter of parents wanting their child to return to the classroom full time any time in 2021. Furthermore, public appreciation of teachers has grown substantiallyduring the pandemic.

Yet, partially because of the attempts to turn them from heroes to villains, 60% of the profession enjoy their job less than last year, with more than three-quarters of teachers working longer hours than they did in 2019. 27% say they are considering leaving because of the pandemic.

Despite berating Trump for proposing the same thing, the National Education Association, representing its 2.3 million members, hailed Biden’s decision last week to press ahead with the reopening. Biden has made clear that his decision was made on the same “save the economy” logic as Trump’s. When schools are open again, “Think of all the people who can get back to work,” he said, as he signed the order, “all the mothers and single fathers that are staying home taking care of their children.”

And therein lies the reason for the attack on teachers; without a reopening of schools, other big businesses cannot function and corporate America cannot return to making profits. Teachers are being asked to risk their lives in the service of capital and are branded as uncaring when they drag their feet. Rather than attack the government for its poor handling of the COVID crisis, corporate media have opted for a return to a favorite pastime of theirs: union bashing.

Featured image:  Teachers prepare an outdoor learning demonstration for students to display methods schools can use to continue on-site education during the coronavirus pandemic, Sept. 2, 2020, at P.S. 15 in the Red Hook neighborhood of the Brooklyn borough of New York. John Minchillo | AP