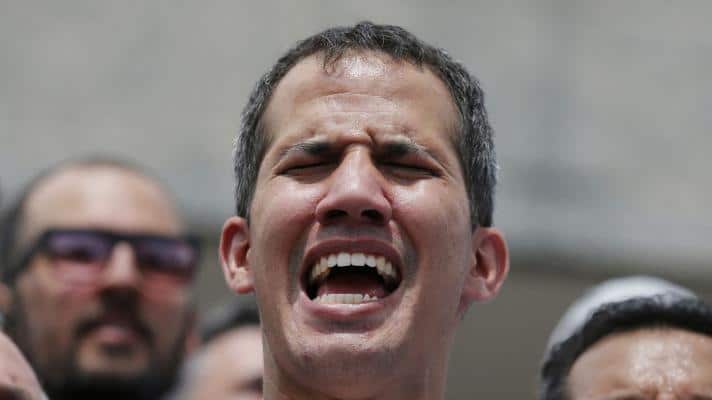 The problem with dummies is that they don’t know what they are. Let’s take the example of a great dummy, the classic dummy who swears that the dummies are others, and never himself: let’s take the example of Guaidó, the dummy who, being dumb, thought of himself as better than others, and believed himself equal to those who hold themselves above everyone else—that perverse, rotten sect, which conceals its true nature, whatever it is, to preserve its privileges… Far from the common mortals. The dummies believed that they liked him, that they did not notice his Guaireño [from La Guaira] look; his dark-skinned, lower-middle class; his bad hair… So dumb that he hoped to enter the Caracas Country Club through a door other than the service door.

As a dummy he believed he had earned the fictitious presidency that they assigned him. He believed he had earned it because he was cool, because “he looks like Obama,” and was photographed for GQ—click, click, put Fabulous Fabi on a full-page spread in [celebrity magazine] ¡Hola!, put a few dollars in Roland’s [Carreno] hand so that he can write that Fabi is fabulous, take these millions, dummy, so that we can hold onto the big bucks…

And the dazzled dummy muttered speeches that no one, absolutely no one cared about, because his speeches said nothing. The puppets don’t think, and the puppets don’t speak… Sadistic dumb, ventriloquist doll brandishing terrible threats, stories that eventually became the story of The Wolf without a Wolf… So much so, that if it weren’t for all the damage caused by his looting, this story would be a bad comedy.

Dozens of cartoonish spokesmen made declarations against Venezuela, giving ultimatums to its legitimate government, counting the days remaining for Nicolás Maduro. Presidents who emerged from shady elections with photocopied ballots, with narco-compadres buying votes from them, unexpected presidents who succeeded one another following investigations in which they were found guilty of corruption, presidents with faces of overstrained dignity, all with outstanding debts to justice, and all with their hands stained by blood and shit. And the dummy was there, swimming in excrement, happy and splashing along with the other jerks who, by crawling before their masters, devalued their worthless presidencies by equating the dummies with themselves.

And the dummies swallowing the story of the fictitious presidency, his lady dummy ordering a pink logo to be designed for the pink First Lady’s stationery… And fluttering in their social circles, a bunch of parvenus—that’s what they called them in the Country Club, that’s even what they called Lilian [Tintori], imagine, for not having ancestry. And the dummies believed that bloodlines could be bought. The lady dummies believed that being blonde was as good as possessing ancestry, and María Corina: no sir, she finds it hard to swallow… And the dummies robbed and stole, possessing nothing in the ancestry department, and his friends asked and asked, and he gave and gave, wanting to buy what can’t be bought with stolen money. At least Fabi filled the fridge…

Money and more money for his pals and the not-so-pals hurt his wallet, of course. It couldn’t be, that in the monumental scramble, they were going to get fleeced. “Monomeros was stolen, and they didn’t give me anything,” said his [first] fake chancellor, and beating his double chin with a gesture of feigned decency, he tweeted his irrevocable resignation. Immediately another chancellor came, because there are plenty of bootlickers. This one was the biggest mooch of them all.

Monomeros, CITGO, bank accounts, gold from the Venezuelan State, a mad scramble and a crazy life, so crazy that it even produced a bad movie, From a Sudaca Taxi Driver in the Canary Islands to Millionaire with a Palace in Madrid. The most vulgar, shameless ostentation… And Cielo [Roland Carreno’s partner] asked his sugar daddy for an SUV, so he could go to his house to pretend he loved him a little bit, and the fat man stole from sick children to please his Cielo, to feel like he’s still attractive, and a madwoman in England gave away the Essequibo, and another asshole in New York invented fictitious meetings at the UN, and Vecchio in Washington drives a Porsche… Money and more money, stealing and stealing everything, everything. All that surrounds the dummy is so rotten that the stench can’t be hidden.

And it’s not that the stench bothers the older criminals who created the dummy, and assigned him a fanciful role that was nothing but a façade for the transnational looting of our country, it’s that the dummy is so dumb that he did them the favor of leaving a trail of shit in his wake, to be used as a knife for his throat. It’s that the dummy is so dumb, he didn’t realize a long time ago that by being dumb and by useless he became a hindrance; that there are finer thieves—dumb also, but with ancestry—that they have wives blonder than Fabulous Gafi; that appear in ¡Hola!, but the one in Spain, the real one, the most chic, where there are blue-blooded thieves like the king, who kills elephants with the money of all Spaniards; and that, as Maria Corina says, no matter how many mansions the dummy’s father lives in, he remains a commoner.

Now the media that sold the fantasy of an interim dummy begin to call him simply a dumb opposition actor, and worse, they call him a dummy with shady dealings, which is the same as calling him a dumb thief. They throw him under the bus, no matter how much he gives them, no matter how much he begs—right, Julio Borges?—and now everyone looks at him askance, now they demand full payment, with clean accounting, transparent and legitimate. Now everyone points their finger at him. There has to be someone guilty of such atrocious and twisted looting, to dissemble, so that the rottenness of the malevolent system can remain hidden. There has to be a culprit, and for this they have the dummies, and the guilty will never be the owners of the show.

While they toss aside the dummy, demoting him from a fictitious president to a “privileged interlocutor,” they begin building the next psychopath who will hold the title of dummy on duty. The next one in line, as always, like all the others, will believe that he isn’t a dummy, because he’s got some heritage, some class, because he’s a snob, and does not realize that in this cruel world of social climbers that they defend so much, a Caracas snob is a fluke to the blue-blooded owners of the world, who laugh seeing there are dummies who believe that by paying 12 thousand dollars a month in rent they come close to resembling the owners of the home. The owners, little dummies, do not pay. The owners are paid, and if not, they seize.

This dummy falls and another dummy waits his turn, rubbing his hands with wide eyes, and he doesn’t see the queue of dummies behind him, who also aspire to be the next designated dummy… He doesn’t perceive anything because he thinks he’s smart, that those dummies are different—because the problem with dummies is that they don’t realize what they are.

Featured image:  The former deputy of Voluntad Popular has been defenestrated even by the EU itself (Photo: Fernando Llano/AP).