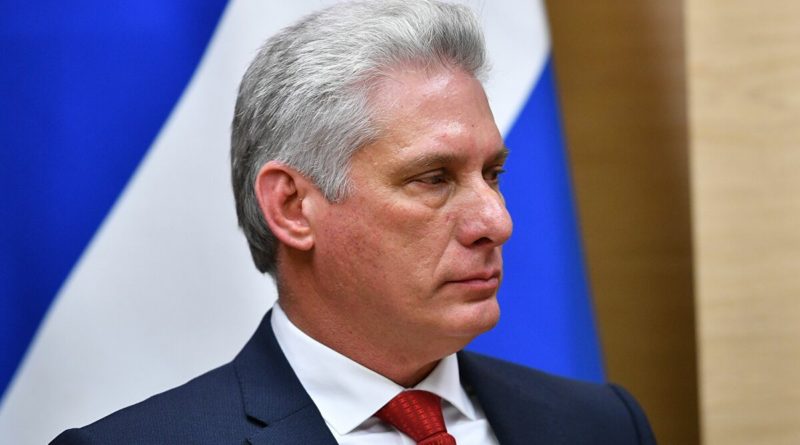 The response to the pandemic must be global and combined, overcoming political differences, said Cuban President Miguel Díaz-Canel, in his speech at the United Virtual Summit against the disease COVID-19, called by Azerbaijan, in his capacity as president pro tempore of the Non-Aligned Movement (NAM).

“COVID-19 has proven to be a global challenge. It does not distinguish borders, ideologies or levels of development. Hence, the response must also be global and combined, overcoming political differences,” Díaz-Canel said in the speech delivered at the virtual summit of the NAM.

The Cuban president stressed that it is not possible to accurately predict the size and consequences of the pandemic caused by the new SARS-CoV-2 coronavirus (causing COVID-19), which has had a devastating worldwide impact due to the high number of infections and large human losses.

Díaz-Canel insisted that we live in “an increasingly interconnected world that, however, has not been able to enhance that interconnectedness in solidarity and today pays the price for its inability to correct serious social imbalances.”

He added that “if we had globalized solidarity as the market is globalized, the story would be different.”

The president of Cuba criticized the lack of solidarity and cooperation, and “the costly mistakes of neoliberal policies, which led to the shrinking of states, excessive privatization and forgetfulness of the majority.”

“This pandemic has demonstrated the fragility of a fractured and exclusive world, not even the most fortunate and powerful could survive in the absence of those who create and sustain wealth through their work,” Díaz-Canel emphasized.

He also recalled that the COVID-19 pandemic exacerbates the profound social inequalities in the world, and specified that 600 million people live in extreme poverty and almost half of the population does not have access to basic health services, in contrast to the escalation of global military spending that already exceeds $ 1.9 trillion.

In turn, he called for the end of wars, including unconventional wars, to safeguard the right to peace, he also rejected the United States government’s military threats against Venezuela, and demanded the attack with firearms against the Cuban embassy in Washington on April 30 be investigated.

He also censured the US government’s policies against multilateralism and its permanent disqualifications for the role they play in confronting the COVID-19 pandemic, in particular the World Health Organization.

In turn, he reiterated Cuba’s willingness to share its experiences in healthcare with the member countries of the NAM, and called to confront selfishness and “share what we have, support each other and learn from successful experiences.”

The virtual summit of the NAM was convened by the Azerbaijani President, Ilham Aliyev, and is held in the format of the Contact Group, which includes representatives from Africa, Asia-Pacific, Latin America and the Caribbean and Europe, representing the different regions of the world that make up the movement.

Cuba is a founding member of the Movement of Non-Aligned Countries since 1961, and was the first country in Latin America to join this international organization, assuming its presidency in the periods 1979-1983 and in 2006-2009.

The NAM is made up of 120 countries, plus 15 nations as observers.