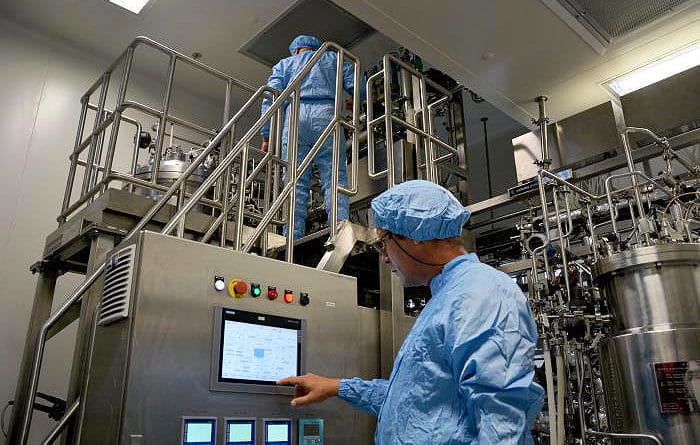 Cuba’s interferon is saving the lives of patients with coronavirus on the island blockaded by the United States, while also preparing vaccines against the disease, as will be explained later. Meanwhile, Donald Trump plunges his own people into a tragedy of biblical proportions because of his negligence in the confrontation with Covid-19. His legacy during this crisis will go down as a crime against humanity. He has now cut off funds to the World Health Organization, blocks and threatens countries like Venezuela and refuses to cooperate in the international effort against the pandemic, as do Russia, China and Cuba. While the world is cooperating on many levels to defeat the pandemic the US stands alone in its isolation and counter-productivity.

To the now established strategic resource of social isolation, the island’s scientific community has geared up its powerful institutions to maximum capacity, to provide the best protection to the people with a non-specific vaccine during this phase and also is working hard to achieve a specific vaccine, in the medium term. Faithful to its tradition of solidarity, of heroic inspiration and loyalty, the island, as it has done since the beginning of the epidemic, will always make its human resources and scientific findings available to other peoples.

Interferon is a product that acts directly to make the immune system respond and activate the mechanisms of viral inhibition. It has been used in previous epidemics, says Dr. Eduardo Martínez Díaz, president of the large scientific-business conglomerate BioCubaFarma. “Normally the number of patients with Covid-19 who go into a serious or critical state is 20 percent. In Cuba, the number that reaches that stage is half, compared to the indicators at the international level. Our country’s death rate is 2.7 percent, which indicates that the way Cuban doctors treat patients, as well as our protocols, is being effective in the treatment of the disease. We think that interferon (INF) is responsible for what we are seeing in practice.” He points out that Cuba produces the necessary INF for local use, as well as meeting the growing number of international requests.

Dr. Vicente Vérez Bencomo, director of the Finlay Institute of Vaccines, says, “We all dream of a specific vaccine that will solve the Covid-19 problem in one fell swoop, but there will be no solution like that this year. In the meantime, he says, there is a transitional one that does not immunize against the coronavirus but provides the so-called natural or innate immunity, which we all have, although not with the same competence. “The virus doesn’t kill us, what kills is the excessive immune reaction that results from this”, he says.

“Part of the questioning we are doing is what is responsible for the balance presented in the asymptomatic patient, who manages to control the virus. So it’s important to understand what that balance depends on.”

In the same line of thought, Dr. Gerardo Guillén Nieto, director of Biomedical Research at the Center for Genetic Engineering and Biotechnology (CIGB), explains the steps already being taken for the immediate development in Cuba of a vaccine capable of activating innate immunity. He clarifies that it is not just a CIGB project but one that exemplifies the capacity for cooperation and integration of Cuban research centers. It details that, in conjunction with the Ministry of Public Health and its regulatory agencies, on March 26 it approved the clinical study of the vaccine and on March 27 the first volunteers were already available to test it.

It is a nasal vaccine for sublingual application, which allows stimulating the immunity at a local level, where the virus is found in the body. [It can be seen] already in blood samples and tonsil and sublingual scrapings that have shown how the molecules on the cell surface that mark the activation of the innate immune system related to viruses are stimulated.

Guillén Nieto said that they are working on 16 lines of research, to magnify success and be able to contribute to the control of the epidemic.

According to Dr. Martinez Diaz, asymptomatic patients are the fundamental cause of the spread of the virus. Hence the importance of doing massive research to detect them, isolate them and stop the spread. It is in this case that the so-called rapid tests can make an important contribution since they act as an indicator of infected areas, the evaluation of which can be refined with the most reliable PCR and with clinical surveys in the community.

As I was finishing writing these lines, Prensa Latina reports the arrival in Qatar of a brigade of 200 Cuban doctors and health personnel, who will reinforce the 500 Cuban doctors who have been permanently in the emirate since 2012 in the fight against the coronavirus. More than 16 countries have been reached in recent weeks by Cuban solidarity to confront Covid 19.