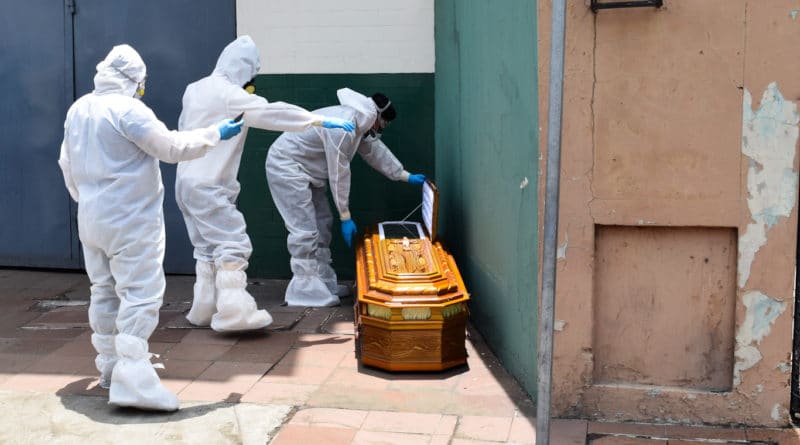 Ecuador is near collapse under the strain of the coronavirus after the government of Lenin Moreno stripped state services nearly bare at the behest of the IMF.

If you are using one of the many coronavirus incidence trackers, the Pacific country of Ecuador does not seem to be particularly badly affected by COVID-19. Officially, the country has less than 7,500 cases and 333 deaths. But everybody knows this number is nonsense, including President Lenín Moreno, who freely admitted that authorities were collecting over 100 dead bodies a day from Guayaquil city alone, the epicenter of the pandemic tormenting his country.

Ecuador’s limited state has essentially collapsed under the strain of COVID-19, with dozens of videos circulating showing dead bodies left in the streets, with no one to collect them. The country has already run out of coffins, so corpses are buried in cardboard boxes or simply left in trucking containers. A recent credible estimate, based on data gleaned from cemeteries and funeral homes, puts Guayaquil’s death toll at 7,600 – almost that of New York, a city four times its size. Thus, more people have died from the virus in the last week in Guayaquil than China’s cumulative total since November. Ecuador’s minister of health resigned last month, condemning the government’s inaction.

“The situation in Ecuador is very fucked up. I don’t even have the means to [explain in] English all of what’s happening. The new Minister of Health is an incredible idiot. Coronavirus or not this country is in big trouble with this wildly incompetent government,” said MintPress contributor Camila Escalante, a resident of Ecuador.

Like many countries, Ecuador is suffering from a severe shortage of medical equipment. Images show doctors and nurses wearing trash bags not only as capes but for masks and hoods as well.

However, a far greater problem than a lack of equipment is a lack of doctors. “I have my [sick] dad at home, because no hospital is able to treat him or anyone, just here in El Ceibo. But, believe me, people are dying. There’s no medical personnel, no nurses. There’s no one working. There’s like three people,” said Caesar Figueroa, a nurse in Guayaquil.

Trust me, I’ve been inside. The situation is precarious. There is no gloves, no masks. There’s nothing. All of Ecuador is a country of nothing. There’s no government. There’s no president.”

The situation in Ecuador is very fucked up. I don't even have the means to English all of what's happening. The new Minister of Health is an incredible idiot. Coronavirus or not this country is in big trouble with this wildly incompetent government.

Since his election in 2017, President Moreno has made a priority of attacking the relatively generous welfare state measures adopted by his predecessor Rafael Correa. Moreno had been Correa’s vice president, and campaigned on the ticket of extending and deepening Correa’s democratic socialist agenda. However, almost immediately after he took office, he began to undo his work.

In 2019, on orders from the Washington-based International Monetary Fund (IMF), he slashed the country’s health budget by a staggering 36 percent. Moreno also rescinded Ecuador’s support for Australian publisher Julian Assange and was promptly rewarded with a $4.2 billion loan from the IMF.

That Moreno would accept any money from an organization with such a dark history in Latin America confirmed to many his real constituency is in Washington, not with the people. Ecuador spent much of the last four decades in debt peonage to the IMF; by 2005 it was spending 47 percent of its entire government income paying back usurious interest on loans long since paid off, a debt trap that ensured many countries in the global south could never seek an independent path.

While leaders in Washington have showered him with praise, Moreno has carried out a generalized crackdown on dissent, forcing Correa into exile. This has, according to Escalante, helped to fuel the coronavirus fire. “A lot of the most competent leaders this country had, were forced to flee, or fled when it became known that political persecution was going to become the norm here. Everything is subject to censorship; doctors are afraid to speak out; reporters are afraid to do their job,” she said. “Imagine being a reporter in Ecuador and doing very little reporting on…Ecuador. Well, political persecution became the reality here in 2017 and it is a matter of time before they start rounding people up for their reporting. As a foreigner, it’s not worth the risk.”

Like other U.S.-backed states Brazil and Bolivia, Moreno’s Ecuador expelled around 1,000 Cuban doctors working inside the country, constituting the backbone of its public healthcare system. “When they left, there were no specialists to replace them,” said Ricardo Ramírez, a retired physician in Guayaquil. “It’s one important factor why we can’t provide an adequate response to the virus now.” In contrast, anti-imperialist countries in the region like Venezuela and Cuba itself have fared far better at tackling the crisis: only 27 people have died in those two countries so far.

The coronavirus was an uncontrollable act of God. Governmental response to the crisis, however, is not. The Moreno administration’s decisions, both before and during the pandemic are the prime factor in why Ecuador might be the world epicenter of the virus. It has been an unmitigated disaster for the population. But, given his close ties to Washington, it is far from clear whether Lenín Moreno cares at all about that.

Featured image: A brigade wearing a biosafety suit to protect from coronavirus pick up a coffin with a body left outside a house in Guayaquil, Ecuador, April 6, 2020. Guayaquil, a normally bustling city that has become a hot spot in Latin America as the coronavirus pandemic spreads, has untold numbers dying of unrelated diseases that can’t be treated because hospitals are overwhelmed. Edison Choco | AP