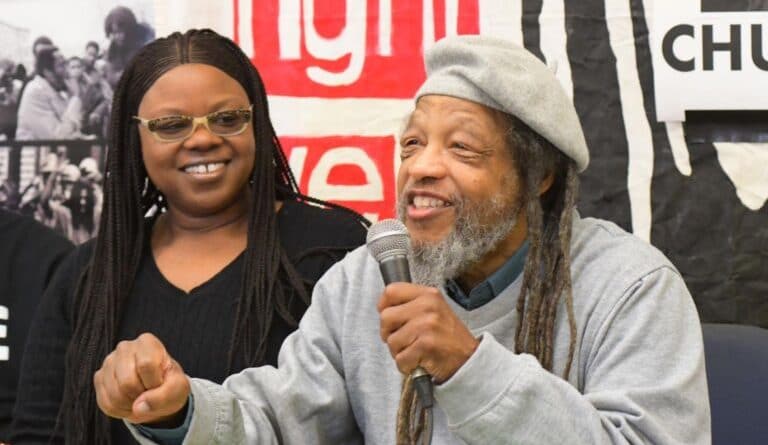 Delbert Africa, a longtime member of the Black liberation group MOVE, has died.

Africa, 74, was one of nine members of the organization that were imprisoned on third-degree murder charges following an August 1978 armed standoff with Philadelphia police that left an officer dead and more than a dozen others injured.

In January, Africa was released after spending 42 years behind bars. He always maintained his innocence.

The deadly confrontation in 1978 pitted MOVE against former Mayor Frank Rizzo’s police department, which wanted to evict the group from its Powelton Village compound, citing health-code and weapons violations.

RELATED CONTENT: President Maduro: Venezuela Stands in Solidarity with the Afro-Descendant Struggle of the World – Afro Colombian Region in Crisis due to Covid-19 (Videos)

After surrendering his arms outstretched — a moment captured in an iconic black-and-white photo — Delbert Africa was badly beaten by police. Footage from that August day shows an officer dragging him by his hair before others join in and begin kicking him. A newspaper photo shows one officer with his foot firmly planted on the side of Delbert Africa’s head.

After being released in January, Africa said he was looking forward to reuniting with the surviving MOVE members who were previously paroled, to continue the work of challenging what he called an unjust criminal justice system. https://t.co/wcZlbD9cZo

Mike Africa said his friend’s final words harkened back to that episode, which left Delbert Africa with a broken jaw and broken ribs, among other injuries.

“He said ‘I tried my best to be a good soldier,’” said Mike Africa. “Even though he felt pain, even though he was hurt, he didn’t give up and he wanted to inspire other people with his example.”

Three officers were arrested in connection to the beating following a grand jury investigation, but a judge dismissed the case.

Delbert Africa and the rest of the so-called “MOVE 9” were each sentenced to 30-100 years in prison after being convicted of killing Officer James Ramp. The group has always said Ramp was killed by friendly fire from other officers.

Two members of the MOVE 9 died in prison before they could be released. The remaining members are now free.

The 1978 standoff was years before MOVE became known nationwide. On May 13, 1985, police dropped a bomb on the roof of MOVE’s compound on Osage Avenue in West Philadelphia. The resulting inferno killed six adults and five children who were inside the house. More than 60 homes were destroyed.

Earlier this year, on the 35th anniversary of the bombing, former Mayor Wilson Goode said a “formal apology” is owed to the families of the victims and all city residents for what happened.

“That way we can begin to build a bridge that spans from the tragic events of the past into our future. Many in the city still feel the pain of that day. I know I always feel the pain,” wrote Goode in an op-ed published in The Guardian.

MOVE has remained intact since its founding in the early 1970s. Mike Africa said internal rifts over the best direction for the group have cropped up recently, a fact that came up during his last conversation with Delbert Africa.

Featured image: Delbert Africa, right, and his daughter, Yvonne Orr-El, speak during a press conference. Africa was released from jail over after he served 42 years for the shooting death of Philadelphia Police Officer James Ramp in 1978. (Abdul R. Sulayman/The Philadelphia Tribune)