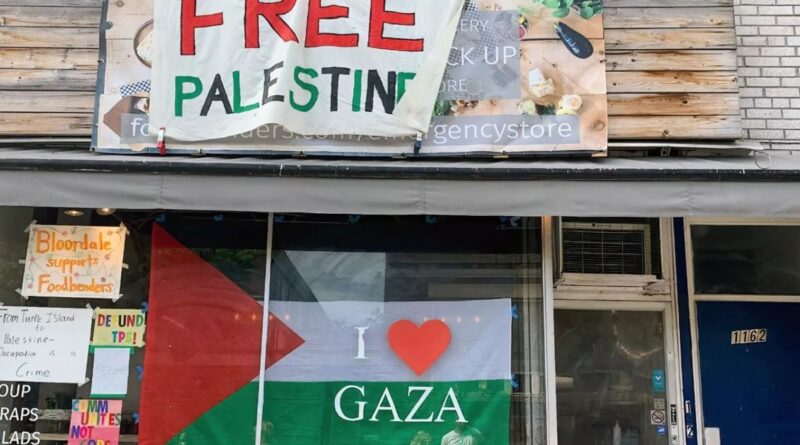 A pro-Palestinian restaurant in Canada is being taken to court and faces the threat of losing its license over posting pro-Palestinian and anti-Zionist tweets, despite the Ottawa government’s claim to be an advocate for human rights and freedom across the world.

February 22, 2021.-  In an exclusive interview with Press TV, the owner of Foodbenders restaurant in Toronto explains how the Canadian government is accusing her establishment of anti-Semitism over anti-Israeli posts and is threatening to take her to court and revoke her license.

“In countries in the West right now, there is a political movement to equate anti-Zionism with anti-Semitism and I have been sort of caught up in that as an outspoken anti-Zionist,” Kimberley Hawkins said on Monday.

“Many people interpret Zionism as Judiasm where I live and for this reason I have been slandered quite aggressively as an anti-Semite and it has caused many problems for me personally and for the company,” she added.

Hawkins further explained that the blowback against her little food company started in 2019 over a signage that was on the window about massacre in the besieged Gaza Strip.

She said the situation intensified when “the Jewish Defense League and affiliated individuals showed up at her store to commit some pretty nasty vandalism.”

Hawkins went on to say that there are four legal cases against her, all of which rely on a social media hastag about Zionism which the Israel lobby in Canada is working to prove amounts to anti-Semitism under the law.

“The hashtag in particular that seems to be the most talked about … is the hashtag #Zionistsnotwelcome which was intended to be in reference to annexation that was taking place in Palestine. That is not how the lobby interpreted it or at least that’s not how they want to interpret it so they are moving forward to try and prove that this hashtag is a store policy and I discriminate Zionists from my store,” she said.

Hawkins described the move as “a political bid” to use the definition of anti-Semitism to prevent people from speaking critically about Zionists or Zionism.

Canada has always boasted itself about its human rights records on the international stage.
The remarks come as Elizabeth Glibbery, director of bylaw enforcement and investigation services with the city municipal licensing division, has said Hawkins is slated to go to court in two weeks for allegedly failing to comply with Chapter 545 of the Municipal Code.

Section 8.4A of that chapter says that “No person licensed … under this chapter shall discriminate against any member of the public in the carrying on of the business on the basis of race, ancestry, place of origin, color, ethnic origin, citizenship, creed, sex,… age, marital status, family status or disability.”

Glibbery further said the city received “multiple complaints” about Foodbenders last year and in response, an advisory notice was sent to Hawkins last August which detailed the consequences of failing to comply with the bylaw.

“The city investigated additional complaints received against this business and the proceedings are currently before the Ontario Court of Justice for contraventions of Chapter 545,” she said.

Hawkins, however, said the complaints are mere “lies,” stressing she has never discriminated anyone from her store.

She also denounced the move as “political persecution” and “corrupt,” given the fact she has been charged with crimes that she has not committed and because of her political stance against Zionism.

The owner-operator of Foodbenders further said the Jewish Defense League has had a large hand in the attempt to bankrupt her company, adding that she has initiated her own legal action against the far-right organization which she said has been largely responsible for her “day to day suffering.”

Elsewhere in her remarks, Hawkins criticized Canada’s claim of advocating freedom of speech, adding that power systems in the country decide “who gets to say what and when and where.”

She also said criticism of Israel and Zionism is definitely not tolerated in Canadian spaces, noting that anyone who dares speak out against Israel’s crimes “faces the risk of losing their career, being slandered as an anti-Semite, becoming victim to legal actions and general, social ostracization.”

Hawkins also said there is growing censorship in Canada and in the West in general, adding that pro-Palestinian groups in particular are being affected by censorship on a regular basis.

Asked why she supports Palestinians, Hawkins responded that they are humans just like herself and “they deserve to be treated with equal and fair human rights as everyone else on earth.”

“And so I would say that all of us should support Palestine and all indigenous groups fighting against racist apartheid. Like [Nelson] Mandela once said we know too well our freedom is incomplete without the freedom of the Palestinians and it is incumbent on all of us to work for their freedom.”