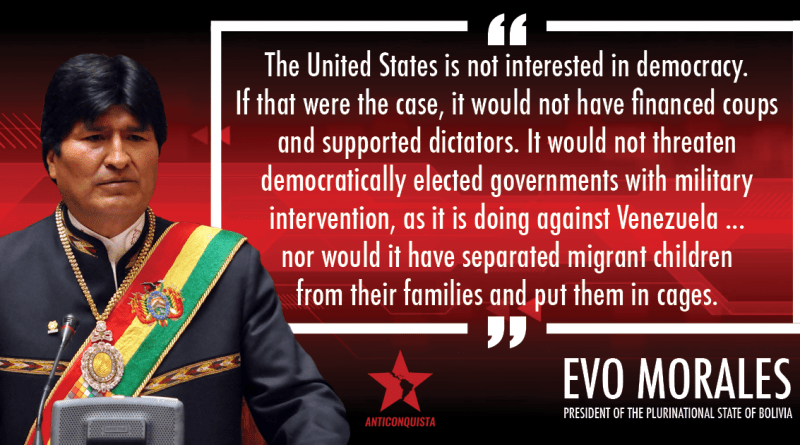 A coup on November 10 removed the socialist government of Bolivian President Evo Morales. The U.S. government made preparations and orchestrated the final stages of the coup. It was in charge. In power for almost 14 years, Morales and Vice President Álvaro García Linera had won elections taking place on October 20. The two leaders would each have been serving a fourth term in office.

Evidence of the U.S. crime appears below. It’s about money, U.S. influence within the Bolivian military, and U.S. control of the Organization of American States (OAS). There are these items:

2. Bolivian armed forces head Williams Kaliman on November 10 “suggested” that Morales resign. That was the coup de grace. Within three days, Kaliman himself resigned and moved to the United States. Sullkata M. Quilla of theLatin American Center for Strategic Analysis explains that Kaliman and other military chiefs each had received $1 million and that top police officiers received $500,000 apiece. U.S. Chargee d’affaires Bruce Williamson allegedly arranged for monetary transactions that took place in Argentina’s Jujuy Province under the auspices of Governor Geraldo Morales. The story first appeared on the website Tvmundus.com.ar.

3. Money flowed freely prior to Morales’s departure. Bolivian ambassador to the United Nations Sacha Llorenti – a Morales supporter – reported that, “loyal members of [Morales’s] security team showed him messages in which people were offering them $50,000 if they would hand him over.”

4. According to the respected Argentinean journalist Stella Cattaloni, Ivanka Trump arrived in Jujuy on September 4-5 ostensibly to honor a small group of women entrepreneurs. Some “2,500 federal agents” and Undersecretary of State John Sullivan accompanied her. At the same time, Governor Geraldo Morales was informed that the United States would be delivering $400 million supposedly to pay for improvements to a big highway in Argentina. Cattaloni suggests that a freight train running through Jujuy en route to Santa Cruz, the center of anti- Morales plotting in Bolivia, was transporting military equipment to opposition groups.

Citing reliable sources, Alicia Condorí, parliamentarian of Evo Morales’s MAS party in Bolivia, told a radio interviewer that Governor Morales somehow delivered money to Luis Camacho, leader of the coup and head of the Santa Cruz Civic Committee. The story gets murky. The governor may have delivered the money on September 4 in Santa Cruz as he accompanied Argentinean firefighters heading there on a mission. To do so, some U. S. officials accompanying Ivanka Trump to Jujuy Province would have been on hand there prior to the governor’s departure – and prior to Trump’s arrival late on September 4. They could have thereby interacted with the Governor. Or, according to another version, the Governor brought Camacho with him on his return trip to Jujuy Province so he could meet with visiting U.S. officials.

5. According to analyst Jeb Sprague, “At least six of the key coup plotters are alumni of the infamous School of the Americas, while [General] Kaliman and another figure served in the past as Bolivia’s military and police attachés in Washington.” For decades, Latin American military personnel have received training and indoctrination at that U.S. Army school now called the Western Hemisphere Institute for Security Cooperation.

Sprague notes also that the top commanders of police that mutinied had received training at the Washington-based Latin American police exchange program known by its initials in Spanish as APALA.

6. The OAS played a crucial role in the coup. Votes were being tallied on October 20 when the OAS, having audited preliminary results, announced that they showed irregularities. The U.S. government echoed the findings and street protests intensified. On October 24 the Supreme Electoral Tribunal declared first-round victories for Morales and García Linare. Protests mounted. The government, under stress, requested another OAS audit.

The OAS made its conclusions public on November 10, earlier than expected. The OAS couldn’t “validate the results of this election.” It called for “another electoral process [and] new electoral authorities.” This was the tipping point. Morales convoked another election but shortly thereafter General Kaliman forced him to resign.

The OAS findings were false. Walter Mebane and colleagues at the University of Michigan, having examined voting statistics, indicated that “fraudulent votes in the election were not decisive for the result.” The Washington-based Center for Economic and Policy Research performed its own detailed study and reached the same conclusion.

The OAS served as U.S. handmaiden. Headquartered in Washington, the organization took shape under U.S. auspices in 1948 with the assigned task of protecting Latin America and the Caribbean from Communism. More recently the OAS, under Secretary General Luis Almagro’s guidance, has spearheaded U.S. efforts to expel President Nicolas Maduro’s progressive Venezuelan government.

Paradoxically, Almagro in May 2019 gave Morales the go-ahead for a fourth presidential term. That was despite a referendum having been defeated that would have allowed the extra term. Almago’s intention may have been to lull Morales into cooperating with OAS overview of the election results.

7. Other signs of U.S. coup preparations are these:

— Prior to the October 20 elections President Morales charged that U.S. Embassy officials bribed rural residents to reject him at the polls. They traveled, for example, to the Yungas region on October 16 with pay-offs to disaffected coca farmers.

— According to Bolpress.com, the National Military Coordinator (Coordinadora Nacional Militar), an organization of reserve military officers, received and distributed money sent from the United States “to create a state of social crisis prior to October 20.” The United States also used “accredited embassies in Bolivia and the evangelical church as facades so as not to be seen as implicated.” Mariane Scott and Rolf A. Olson, U.S. Embassy officials in La Paz, met with counterparts in the embassies of Brazil, Paraguay, and Argentina to coordinate destabilization efforts and “to deliver U.S. financing to opposition forces inside Bolivia.”

— Weapons shipments from the United States arrived at the Chilean port of Iquique on their way to the National Military Coordinator group inside Bolivia.

— The State Department allocated $100,000 to enable a company called “CLS Strategies” to mount a disinformation campaign through social media.

— In mid-October “political consultant” George Eli Birnbaun arrived in Santa Cruz from Washington with a team of military and civilian personnel. Their job was to support the U.S. – preferred presidential candidacy of Oscar Ortiz and to “destabilize the country politically and socially after the elections.” They provided support for Santa Cruz Civic Committee’s youth organization – specialists in violence – and supervised the U.S. – financed “Standing Rivers” NGO, engaged in spreading disinformation.

— Sixteen audio recordings of the plotters’ pre-election conversations were leaked and showed up on the internet. Several of the voices mentioned contacts with the U.S. Embassy and with U.S. Senators Ted Cruz, Robert Menendez, and Marco Rubio. Sprague reports that four of the ex-military plotters on the calls had attended the School of the Americas.

This presentation focuses entirely on the evidence. In a criminal investigation, evidence is central to determining guilt or innocence. Considerations of motive and context are of lesser importance, and we don’t deal with them here. But when and where they are attended to, they would logically fall into categories that include the following:

So the evidence is clear. It points to a controlling U.S. hand in this coup d’état. The U.S. government bears heavy responsibility. There were Bolivian instigators, of course, but the U.S. plotters fall within the range of our own political processes. That’s why the accusing finger points at them. In this instance, the U.S. government, as is its custom, disregarded international law, morality, respect for human life, and common decency. The U.S. government heads ultimately in one direction: anything goes; all is allowed. The big question is why that is so.