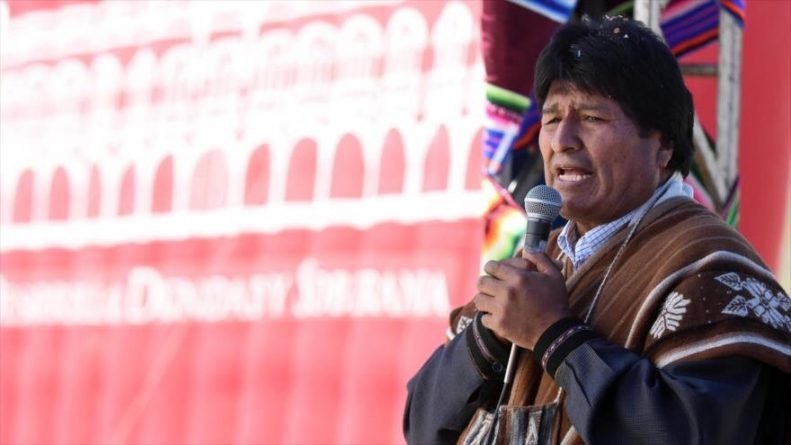 Bolivia denounces the “double moral” of the US in offering “humanitarian aid” to Venezuela and at the same time subjecting it to “economic suffocation”.

“With double standards, USA announces ‘humanitarian aid’ to the people of Venezuela after economically suffocating that sister country with abusive and illegal sanctions and confiscations, ” Bolivian President Evo Morales tweeted on Friday.

The president has repudiated that Washington speaks of humanitarian support, since in his opinion ” it destroys the principle of international law of ‘humanitarian aid’ with coup actions “that it applies against Venezuela.

For their part, the Venezuelan authorities have called the supposed “humanitarian aid” of the US Government a “show” and a manipulation to justify a military aggression against Venezuela. On Thursday, after meeting in Uruguay with the contact group to address the political situation in Venezuela, the Bolivian Foreign Ministry announced its decision to join the Montevideo Mechanism, established by Mexico, Uruguay and the Caribbean Community (Caricom), “in order to contribute effectively to the development of an open dialogue without impositions.”

The Foreign Ministry indicated that Bolivia chooses not to sign the contact group’s communiqué, made up of eight countries of the European Union (EU) and five of Latin America, “because it does not feel represented by the totality of its content”. This document calls for new presidential elections that is a flagrant interference in a country’s internal affaires.

The final declaration of the group on Venezuela was not signed unanimously by the participating countries. Neither the member states of the Caricom nor Bolivia nor Mexico signed the document, which proposed a new electoral process – disavowing the one made last May 20 -, coordinate a humanitarian mission – something denounced by Caracas as an excuse to promote an intervention abroad – and a technical mission to visit Venezuela.

Considering this, the Bolivian chancellor, Diego Pary, has noted that the Montevideo Mechanism proposes a dialogue between the actors involved in which, in addition to the negotiation, common points are sought to build and sign agreements, as well as to implement the commitments.

Venezuela entered the current phase of its political crisis on January 23, when the president of the National Assembly, Juan Guaidó, unconstitutionally proclaimed himself interim president of the country with the support of the United States. The government of President Nicolás Maduro denounces the attempted coup backed by Washington.