The Colombian government of President Gustavo Petro sent a letter requesting Venezuela to be the guarantor of the negotiation and peace process between the government and the Colombian guerrilla organization National Liberation Army (ELN).

Venezuela answered in the affirmative. President Nicolás Maduro Moros pointed out that “once again, as Commander [Hugo] Chávez did in his time to guarantee the Peace Accords [between the Colombian government and the FARC], Venezuela accepts the role of guarantor of the negotiations and the Colombian peace agreements with the ELN.”

President Maduro added that Venezuela is committed to peace, stability and security in Colombia, since he considers that peace in Colombia is also “the peace of our nation, of South America and of the entire continent.”

Petro’s letter addressed to the Venezuelan president states that the Colombian government and the ELN guerrillas have “reached an agreement to fully and safely apply said protocol,” for which they have planned “the holding of a meeting in Venezuela very soon in order to specify the procedure as well as other steps for the long-awaited reestablishment of negotiation with these guerrillas.”

The letter came after a delegation from the Colombian government arrived in Havana, Cuba on August 11, to start a rapprochement with representatives of the ELN and to work on the resumption of peace talks, as reported by Telesur.

Gustavo Petro announced during his electoral campaign that he would resume dialogue with the ELN, which had been suspended until now due to the actions of the government of Iván Duque, which had also de facto repealed a large part of the peace agreements that had been reached with the Revolutionary Armed Forces of Colombia – People’s Army (FARC-EP).

This announcement includes many elements beyond what it may hold for Colombia. For Venezuela and the region, it is a milestone that can open the way, this time in a credible way, to the stabilization of Colombia and the end of the longest armed conflict in the continent.

For Venezuela, specifically, this invitation also has several implications.

Venezuela regains its place in the international scene
In the last year, Venezuela’s  international relations have gone through an evolutionary process, after the country was shut out in 2019 due to the imposition of the “interim government” headed by Juan Guaidó and the attempted diplomatic isolation of Venezuela by the United States and its allies.

As this strategy was exhausted and failed completely, the countries of the region have decided to progressively and pragmatically adjust to the real nature of Venezuelan politics. In 2021, it was the government of President Maduro that represented Venezuela at the Ibero-American Summit. In 2022, the US government did not host Guaidó’s “interim government” at the Summit of the Americas. Despite the exclusion of Venezuela and other countries from this event, the Americans have likewise entered into direct negotiations with the legitimate government in Caracas. In purely concrete effects, the intended isolation turned out to be unsustainable and unfeasible.

In the same vein, the new government in Colombia has resumed diplomatic and consular relations with Caracas and it has understood that Venezuela could play a constructive role in the negotiations with the ELN, as happened with the peace process that was undertaken earlier with the FARC-EP.

It should be remembered that Venezuela was already part of the negotiations between the Colombian government and the ELN as a guarantor country. The talks were suspended unilaterally by the Duque administration in 2018.

The new invitation to Caracas to this dialogue proposes the incorporation of Venezuela in a highly pertinent and constructive position to resolve the long and extensive conflict in Colombia. 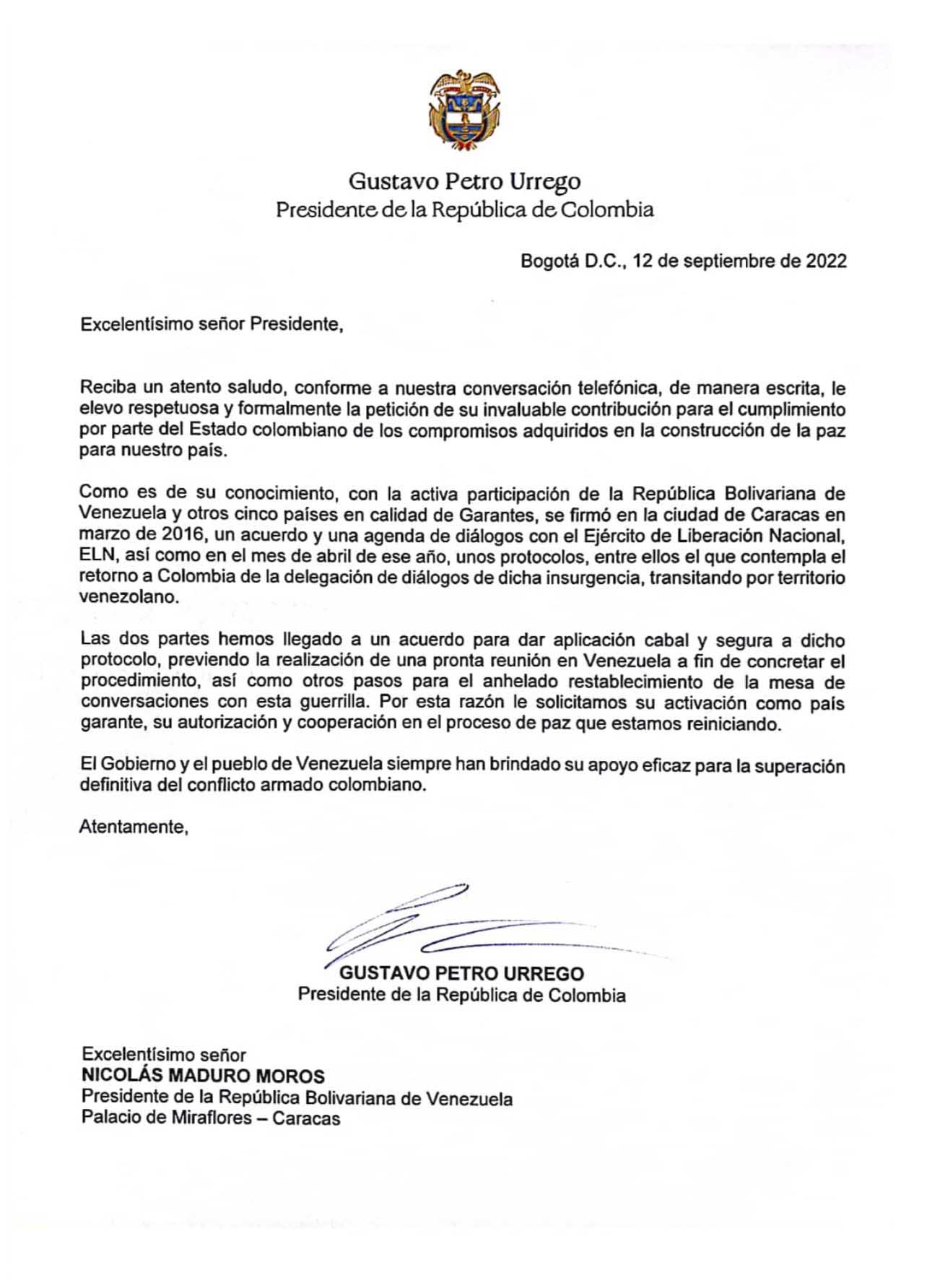 By participating as a guarantor, a credible and trusted party, Venezuela regains a key space in the regional and international scene, breaking the isolationist agenda.

Construction of a regional peace policy
It is very likely that the government of Gustavo Petro will reach agreements with the ELN. However, the construction of complete peace in Colombia is a much more intricate and difficult goal, because after the disqualification of part of the agreements with the FARC-EP, and long before, with the false “demobilization” of the paramilitary groups of Álvaro Uribe, the armed forces in Colombia have taken on new names that are not subject to negotiation or political intermediation, and therefore will not be subject to negotiations and disarmament.

The complexity of the narco-terrorist structure in Colombia is also entrenched in the country’s institutions, hence its ability to reproduce corruption, the weakness of government entities and the perpetuity of war is more than profound, almost congenital.

The Petro government has proposed that the dismantling of the war, but especially the construction of conditions for peace, although they should fundamentally obey Colombian laws, must also have international support and the concerted efforts of the countries in favor of these objectives.

For example, the decriminalization of certain crops and a different way to treat the drug problem in Colombia.

Similarly, the execution of negotiations with the ELN will offer the parties to the conflict a space of opportunities to understand, from the dimensions of the present, the singularity of the factors that perpetuate the conflict, since there are already references to the use of weapons and the new versions of paramilitarism following the agreement with the FARC-EP. All of them have a bearing on peace and security in several terms.

In this issue, Venezuela plays an essential role since it shares a long border with Colombia and the Colombian conflict has historically infiltrated into Venezuelan territory.

Venezuela, by being part of these negotiations as a reliable and constructive party, dissociates itself from the baseless accusations made by Colombia’s former governments, regional political leaders and the media that Venezuela is a “sanctuary” for Colombian guerrillas.

This is not a minor issue. In 2019, Iván Duque even presented before the United Nations General Assembly false images of alleged ELN guerrillas on Venezuelan soil in an attempt to create an international scandal.

Although most of those narratives have been discarded as ridiculous, they are still part of the false dossier against Venezuela and are part of the argument that has tried to legitimize the US-led blockade and pressure against the country.

The possibility of the ELN and the Colombian government reaching agreements for peace and disarmament could dismember by way of facts any hold on that old accusation against Venezuela.

Even more important for the new round negotiations would be the construction of a zone of peace and stability from Colombia with regional reach.

Binational border security
At the moment, Venezuela is fighting significant battles against Colombian narco-terrorist factors in the border region in the frontier state of Apure.

This diffuse war of a prolonged nature has placed the emphasis on the Venezuelan side on the containment of a conflict generated and fortified in Colombia that has sought to colonize Venezuelan territory in a manner detrimental to national sovereignty.

The seriousness of the rupture of Colombia-Venezuela relations that the government of Iván Duque propitiated through its support for the “interim government” deliberately weakened binational institutional collaboration, inter-governmental communication and the construction of minimum common policies to attend the border situation. This was, by default, a maneuver to try to undermine Venezuelan security, let’s look at it this way.

Therefore, and in this new stage, the participation of Venezuela as an observer, mediator and guarantor in these negotiations with the ELN (a matter yet to be defined in detail), represents a new opportunity for the governments of both countries to develop new points of agreement in terms of binational border security.

The ELN and other Colombian armed factors have been part of the mosaic of the conflict on the border between the two countries. Therefore, it should be understood that the ELN is only one part of this complex picture. However, the negotiation may provide clues, elements of attention and concrete references that must be addressed by both governments.

In the long term, although Colombia will develop a strategy of building peace inside the country and dealing with the difficulties that the new types of narco-paramilitarism may present, it is especially important to understand the socio-economic and socio-territorial realities of its border, which actually involve Venezuela.

The vision of a comprehensive border security policy must be developed from the material dimensions and inertias in these territories, to overcome political, economic and social vulnerability as components of a security beyond the use of arms.

Although Petro, unlike his predecessors, has referred to these conditions against the tide of warmongering, he will not be able to do it alone. He will necessarily have to count on the support of Venezuela to build a related policy in the border territories.

This September 26, the two countries will formally open their borders in a step-by-step process, and it is expected that both governments will be able to build joint policies on binational border security in the short term.