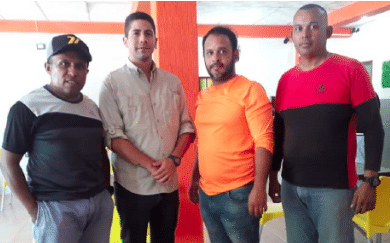 On March 31, Venezuelan NGO FundaREDES denounced the arrest of two of its members in Apure state, and of two journalists from the Colombian channel NTN24 by the Bolivarian National Guard (GNB).

The opposition activist Javier Tarazona is promoting a smear campaign on social media, referring to the “forced disappearance” of four Venezuelans for allegedly “documenting the violation of human rights in the area” by Venezuelan military deployed to defend Venezuelan sovereignty.

These claims are contradicted by the fact that, while claiming a missing persons case, organizations like the National Union of Press Workers already know where the “activists” and journalists are. According to the union, the four are in El Fuerte Sorocaima [station], of the 92nd Brigade, in Guasdualito, Apure state.

Trending topic makers
One of the NTN24 journalists arrested was Luis Gonzalo Pérez, the same one who in February 2019 announced the incredible story that the Venezuelan Guard and police had set fire to Guaidó’s “humanitarian aid” trucks with a “tear gas bomb.”

However, videos on social media networks and the presence of Telesur in the area invalidated that version of the supposed “incendiary” potential of tear gas canisters, and revealed that it was right wingers from Colombia who set fire to the trucks. This situation revealed two things: the bad intentions of Colombian media outlets, and that the trucks allegedly loaded with food and medicine were actually carrying barricade supplies.

In this case of the arrest of journalists and activists, Tarazona, who presents himself as a regular defender of citizen’s causes, intends to manufacture a narrative about the “deliberate” intention of Venezuela to silence the truth regarding events in Apure state.

Dangerous coincidences
The insistence of the director of FundaREDES’ narrative, who is Venezuelan, coincides suspiciously with the trend pushed by Colombian media. Through stories, analysts and testimonies, they hammer out this narrative of a heartless “Maduro Guard” that arrived in La Victoria killing innocent people, looting homes, and framing innocent civilians as guerrillas—something than in Colombia they sadly know very well how to do.

Even the maneuver of transferring to Venezuelan public opinion, and accusing the FANB of exercising the harmful and proven tradition of the Colombian authorities of forging false positives, is striking.

Tarazona in his videos “warns” that the Venezuelan military authorities most likely want to make a “false positive” with the two FundaREDES activists and two journalists from the Colombian channel NTN24, as the Venezuelan Army would have done —in his peculiar imagination— already with a family in El Ripial, who they purportedly presented as guerrillas.

At the service of “su merced“
Regarding the political interests that motivate the FundaREDES NGO and its director, there is evidence on social media networks that reveal their services to the Colombian government. In 2018, after he delivered a report on alleged human rights violations in Venezuela—ammunition that serves to fuel the constant attacks on Venezuela from Bogotá—Tarazona posed for a photo with Iván Duque.

He would also have delivered similar documents to former deputy Juan Guaidó, whom his organization recognizes as “interim president.” These two subtleties, at the very least, provide an account of which side Tarazona operates on, politically, and to which interests this “activist” responds.

Both digital and conventional media have been promoting narratives that favor foreign intervention. In the case of NTN24 and its reporter Luis Gonzalo Pérez they have done so by spreading fanciful theories of a heartless government that burns humanitarian aid with tear gas canisters, and now Tarazona is weaving a story that the Venezuelan military forces violate the human rights of civilians, deliberately omitting that they are defending Venezuela’s sovereignty and are the victims of the neighboring country’s narco-terrorism.

Call for foreign interference
From his accounts on social media networks, Tarazona has called for the intervention of international organizations, exactly as was done by criminal groups through WhatsApp voice recordings at the beginning of the conflict in Apure.

This storytelling technique, which for some seems like a game without dangerous consequences, is a tool of war. With similar strategies of manipulations, lies, or half-truths disseminated in the media, the intensification of political and financial pressure against sovereign nations or material attacks have been promoted, causing victims.

Reviewing Colombian media content from the other side of the border, we realize that they are the propaganda arm of the paramilitary groups and the interests of Bogotá.

Although we Venezuelans may be aware that the FANB has regained control of the area, Colombian press reports are aimed at the international audience, foreign governments, and multilateral organizations, employing media manipulation to try to justify and increase the pressure against Venezuela.