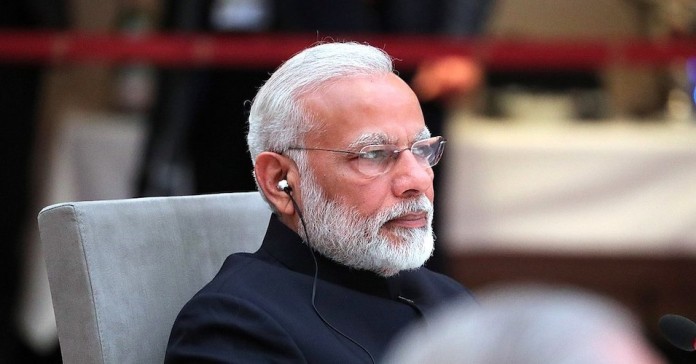 “Are Trump and Bolsonaro next?”

An award for Indian Prime Minister Narendra Modi from the Bill and Melinda Gates Foundation is drawing increased criticism this week from rights advocates who are concerned because of Modi’s human rights record in India and Kashmir and who called to rescind the honor.

“As Modi’s India occupies Kashmir, the Gates Foundation has decided to give an award to the far-right Hindu nationalist,” peace activist group CodePink said on Twitter. “Shame on them!”

The Indian prime minister is being given the award for his sanitation and toilet access initiative, the Clean India Mission, at the foundation’s annual Goalkeepers event in New York City on September 24-25. The initiative, the foundation said in a statement to The Guardian, was evidence of “the progress India is making in improving sanitation, as part of its drive toward achievement of the U.N. sustainable development goals” and the reason for the award.

But the Indian leader’s treatment of ethnic minorities in his country’s northeastern state of Assam—including plans to put “non-citizens” in camps—and his government’s August assault on Kashmir raise questions on the wisdom of honoring the right-wing leader.

Modi is “committing genocide of Muslims in India and Kashmir but is receiving an award in a few weeks here in the United States from the super liberal Gates Foundation,” tweeted author Saira Rao.

“This isn’t complicated,” human rights lawyer and activist Arjun Sethi said on Twitter. “If you build a toilet in one room, and torture in another, you’re undeserving of recognition.”

A group, South Asian Americans and Allies in Philanthropy, wrote an open letter protesting the award on Medium. In the letter, the writers call for rescinding the honor because “under PM Modi’s leadership, religious minorities all across India are facing heightened levels of violence, exclusion, and discrimination.”

“For over a month now, PM Modi has placed eight million people in Jammu and Kashmir under house arrest, blocked communications and media coverage to the outside world, detained thousands of people including children, and denied basic benefits,” the letter reads. “Reports of torture, including beatings and the murder of a young child by Indian security officers, are emerging as well. In addition, the Indian government has begun to disenfranchise millions of residents, mainly Muslims, in the state of Assam.”

The effects of Modi’s tenure as prime minister were further expounded upon in The Washington Post by Polis Project executive director Suchitra Vijayan and Georgetown law professor Arjun Singh Sethi:

When Modi was elected, many chose to overlook his murky past—but India’s vulnerable could not. He has used both state power and the bully pulpit to further his ethnonationalist agenda. Under his leadership the country has witnessed a spike in hate crimes and mob violence, particularly against Muslims and Dalits. Rarely are the perpetrators held accountable. Last summer, a minister in Modi’s cabinet even celebrated eight men who had been convicted of lynching a Muslim. Modi himself rarely publicly mentions the hate and violence surging across India.

The authoritarianism and brutality of the Modi government in Kashmir, Muslim Democratic Club of New York co-founder Faiza N. Ali said on Twitter, should disqualify the Indian prime minister from any such award.

“Modi is a fascist and Islamophobe, full stop,” Ali tweeted. “The Gates Foundation should not proceed with this award after he’s placed a communication blockade in Jammu and Kashmir, detained thousands including kids, and amid other serious human rights violations.”

“Are Trump and Bolsonaro next?” wondered professor and writer Katrina Karkazis.

Bill Gates, who’s also weathering bad press around his association with recently deceased convicted sex offender Jeffrey Epstein, “should be ashamed of himself,” said Yale University researcher Gregg Gonsalves, who decried Modi as “not worthy of any award.”

“He is a despot-in-the-making, a human rights abuser,” said Gonsalves. “Everyone in public health should speak up.”