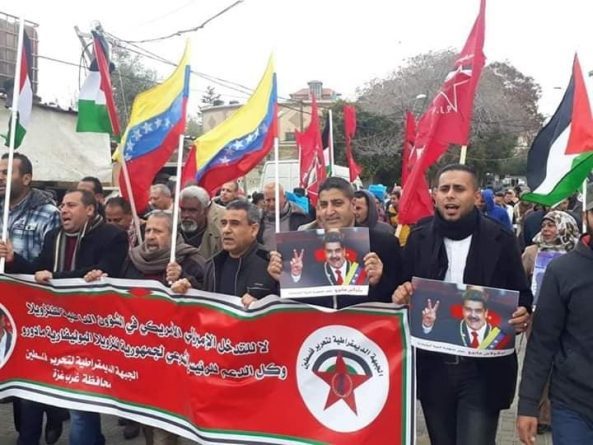 As the international community divides over who to back for leader of Venezuela—President Nicolás Maduro or opposition legislator Juan Guaidó, who has declared himself the rightful head of government—the Palestinians of Gaza see an unsettling similarity to their own history. And as a result, they know who they side with, and against.

“There is a similarity between the Palestinian people and the Venezuelan people,” observed Nisreen Abu Amra, a member of Gaza’s Central Committee for the Democratic Front for the Liberation of Palestine (DFLP). “We are in the same trench, facing a reactionary, imperialist conspiracy led by the United States of America and Israel.”

Abu Amra was among the participants at a demonstration held in Gaza City to send a message of solidarity with those in Venezuela who oppose the U.S.-supported regime change. The rally took place in the front of the U.N. headquarters in Gaza City. Palestinian and Venezuelan flags were raised, along with photos of Maduro and posters condemning the U.S. intervention.

“The same powers that are tampering in the internal affairs of Venezuela interfere with ours,” agreed Ahmed Abu Halima, another participant in the DFLP protest.

Talal Abu Zarifa, member of the DFL’s Political Office, called on the United Nations to take a firm stance to stop U.S. intervention.

Indeed, it’s no wonder Palestinians in Gaza call for solidarity with Venezuela’s elected president and against a coup—no matter how imperfect Maduro is. The parallels with Palestine, and specifically Gaza, are striking:

Venezuela: The Wall Street Journal reports that the night before Juan Guaidó declared himself interim president of Venezuela, he received a phone call from U.S. Vice President Mike Pence. The American official pledged the United States would back Guaidó if he seized the reins of government from Maduro, and even instructed the until-then-little-known politician to invoke a particular clause in his country’s constitution. Although the U.N. is calling for negotiations between all parties, U.S. administration officials say they will support those only if they are to “negotiate (Maduro’s) exit strategy.”

Palestine: After the Hamas movement won a majority of seats in Palestine’s legislative body in 2006, some international diplomatic experts favored engaging with the party to determine if an accommodation was possible. But instead, the U.S. representatives, supported by its European allies, forbade President Mahmoud Abbas from working with Hamas to form a unified government, threatening to cut off all aid if he did. In fact, within just a few months of the election, U.S. Secretary Condoleeza Rice pushed Abbas to dissolve the new government.

(It didn’t get much media coverage, but Tony Blair—then prime minister of the UK—admitted in 2017 that “we should have, right at the very beginning, tried to pull [Hamas] into a dialogue.” Yet today, the UK has joined the United States in once again opposing negotiations.)

Venezuela: McClatchy News reports that a U.S.-owned plane loaded with arms flew from Miami into Valencia, Venezuela’s third-largest city, nearly 40 times since January 11, the day after Maduro was sworn in to a second term. The Boeing 767 is owned by a company called 21 Air based in Greensboro, North Carolina. (While no definitive links between 21 Air and the U.S. government have been established, McClatchy reports the chairman of 21 Air has ties to a company involved in the CIA’s rendition program.)

Palestine: The American government armed a leader in Abbas’s party (Mahmoud Dahlan) and sent him and his forces into Gaza for what it hoped would be an overthrow of Hamas. Dahlan worked closely with the F.B.I. and the C.I.A. and developed a warm relationship with Director of Central Intelligence George Tenet.

Venezuela: Leading the charge against Maduro for Trump is his new special envoy, right-wing ideologue Elliott Abrams. He was found guilty for lying to Congress during the Iran-Contra scandal and also is linked to the 2002 coup in Venezuela that attempted to topple Hugo Chávez. And…

Palestine: Leading the initiative to arm and train Dahlan’s forces so they could remove Hamas from government was none other than, you guessed it, the same Elliott Abrams.

Venezuela: While there are many legitimate reasons for Venezuelans to be unhappy with Maduro, a good part of the country’s economic crisis is due to U.S. sanctions imposed since Chavez won office.

Venezuela: As mentioned, the grievances against Maduro are serious and widespread. However, that does not translate into a desire for his forced removal. One recent survey found that only 35 percent of Venezuelans support foreign intervention; more than half instead support renewed dialogue with Maduro or his negotiated removal.

Palestine: International sanctions designed to unseat Hamas have resulted in collective punishment of Gaza’s 2 million people. However, while complaints against Hamas—like those about Maduro—are widespread and serious, repeated polls show the majority of Gaza Palestinians do not support America’s insistence on Abbas as their leader due to his willingness to cooperate with Israel (to the extent that he even polices his own people on Israel’s behalf).

As American investigative journalist Allan Nairn commented on the radio program Democracy Now, “In both situations (Venezuela and Palestine), the U.S. has no standing to be a mediator, a disinterested third party. The U.S. is on one side. They’re on the side of the right-wing and the rich in Venezuela, who are trying to topple this government. It’s the same with Israel-Palestine. The U.S. has claimed for years to be an honest broker between Israel and the Palestinians, when, in fact, everyone knows the U.S. is on the side of the Israelis and against the aspirations of the Palestinians to have their legal rights under international law enforced and to regain their political sovereignty.”

Given these strong parallels between Venezuela and Palestine, it is no surprise that Guaidó now is in the process of restoring ties with Israel, which had been severed a decade ago by Chávez. Guaidó also announced he may open the new Venezuelan Embassy in Jerusalem, following the lead of the United States.

Abdul Sattar Qassem, professor of political science at Gaza’s An-Najah National University, observes that under Chavez and Maduro, “Venezuela has stood with the Palestinian cause and with all other oppressed people in the world. And all the oppressed are under the thumb of the United States. The U.S. has many reasons for intervening in Venezuela—including installing a leader it can control. The American government always says we must uphold international law, but they are the biggest phonies.”