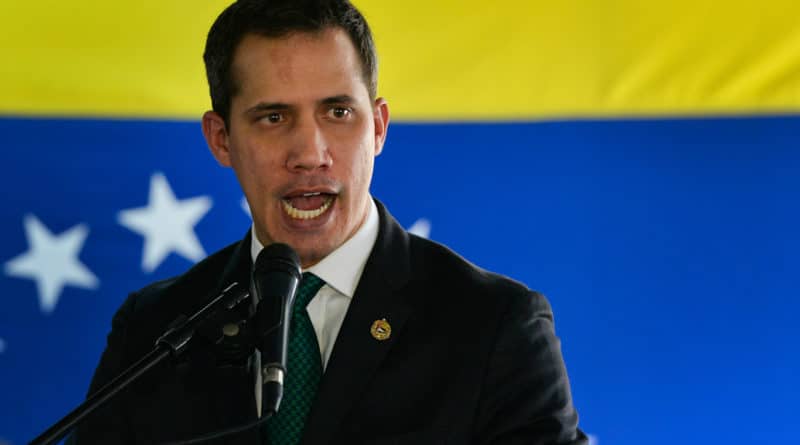 One year since his audacious coup attempt failed spectacularly, Guaidó is once again trying to overthrow the government of Nicolas Maduro.

Exactly one year since his audacious coup attempt failed spectacularly, self-declared Venezuelan president Juan Guaidó is once again trying to overthrow the government of Nicolas Maduro. “Today I speak to the patriotic soldiers of our Armed Forces who rebelled against hunger and destruction and sided with the constitution,” he announced on social media last night, “To the majority of patriotic soldiers who are still in each branch of the Armed Forces: today, more than ever, there are obvious reasons for them to act and support the formation of a National Emergency Government…we are going to liberate all of Venezuela.” In a separate video published today, Guaidó addressed Maduro directly: “Every political agreement to save Venezuela begins with your departure from power,” he said, demanding his immediate resignation.

You have to be kidding me. Again?? The same tweet … again 🤪 on and on and on https://t.co/k9QJVOs5Yx

Guaidó’s call for the military to come over to his side and for Maduro to step down comes precisely one year after his most notable coup attempt, which primarily consisted of him standing on an overpass near a military base, claiming to have taken it over and to lead a huge rebel army. This narrative was rudely interrupted when state media rushed there and filmed the base in a state of complete normalcy, soldiers and even commanders unaware of their supposed defeat. Guaidó continued to address the nation via social media, claiming the small group of people around him in non-matching military uniforms were actual defecting soldiers. The day, like his three other coup attempts that year, ended in embarrassing defeat. The government brushed off the action, labelling it a “small” coup attempt.

However, there are reasons why the U.S. might be able to force their candidate on Venezuela this time. For one, the Trump administration has frozen and transferred $342 million from the Central Bank of Venezuela’s Citibank account to Guaidó, who is using the Venezuelan people’s collective wealth to pay his supporters $5,000 per month, an enormous salary in Venezuela. He is also offering local medical workers a stipend during the coronavirus pandemic, hoping to increase his base of support. At a time of collapsing oil prices (the country’s major export) the United States has also sent warships to the region to tighten sanctions against the country, all under the guise of an anti-drug operation. Venezuela imports a great deal of food, and much of it is controlled by oligarchical corporations linked to the opposition. For example, over half of the country’s flour is controlled by Empresas Polar, (the country’s largest private company) whose CEO, Lorenzo Mendoza, considered standing as the opposition’s presidential candidate in 2018. Mendoza has regularly used his power to starve the country at times of political tension.

On the other hand, Guaidó is as unpopular as he has ever been inside the country, even among the opposition, who removed him from his post as head of the National Assembly in January. His own political party, Voluntad Popular, also expelled him from their ranks. Opposition presidential candidate in 2018, Henri Falcón recently attacked his credibility, asking if oil company CITGO is truly in his hands, why is there a gasoline shortage in the country. The most recent polls show he has a 10 percent approval and a 69 percent disapproval rating. He is even unpopular among his fellow coup-plotters; after a failed attempt in January 2019, his co-conspirators fled to the United States, thinking they would be given a hero’s welcome. Instead, they have spent over a year in an ICE concentration camp for crossing the border illegally. The highest ranking member of the group told reporters that they feel abandoned by Guaidó.

While Maduro is often disparaged in Western media because of his working class roots (he was a bus driver and union organizer before entering politics), Guaidó is constantly presented as the true humble man of the people. This, despite the fact his father was an international airline pilot, sending his son to private schools and a private university in Washington, D.C. It appears he is unable to travel freely around the country for fear of coming into contact with working class people. In February, for example, he touched down at Simon Bolivar International Airport in Caracas, where enraged crowds of travelers and even airline employees began hectoring, jeering and manhandling him, dousing him in water and other, less sanitary liquids, shouting that he was a “traitor” and a “fascist.” The incident was unironically described across Western media as him being “greeted by a throng of cheering supporters.”

Thus, while the COVID-19 pandemic makes Venezuela more economically weak than ever, it appears unlikely that Guaidó’s latest action will result in the sudden overthrow of the Maduro government, in power since 2013.