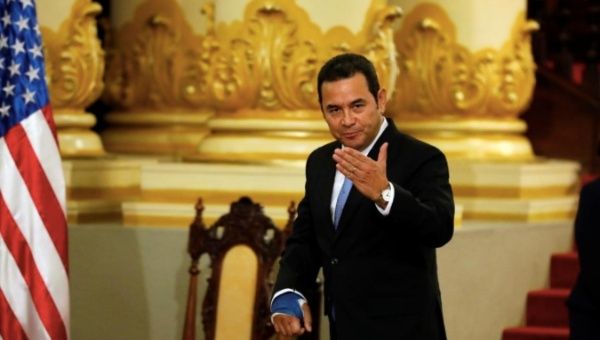 The Guatemalan government said in a statement that the deal would allow its citizens to apply for temporary visas to work in the U.S.

Guatemala and the United States signed a migration deal Friday after President Donald Trump, threatened economic sanctions against the Central American country if it did not become a “Safe Third Country (STC).”

While Guatemalan officials refrained from confirming whether they’d accepted a STC status, they said the new agreement will apply to Honduran and Salvadoran citizens. In the past, Guatemala’s Constitutional Court ruled a STC deal could not be signed without prior approval from the country’s Congress, which is on a summer recess.

The Guatemalan government said in a statement that the deal would allow its citizens to apply for temporary visas to work in the U.S. agricultural sector, and in the medium- to long-term, would allow for work visas for the construction and service sectors.

Following the court’s ruling earlier this month, President Jimmy Morales cancelled an appointment with Trump in Washington where the two had planned to discuss migration. Trump responded with threats of tariffs and sanctions.

Right-wing Morales, who tried last January to kick out an anti-corruption team on the verge of investigating him and his National Party for allegedly receiving US$1 million in illegal campaign funds, continues to go along with the U.S. deal.

The Guatemalan president said that, besides paving the way for unprecedented U.S. economic sanctions, the decision by the Constitutional Court undermines U.S.-Guatemala relations, “the constitution and the presidential mandate,” Morales argued.

Legal experts say it’s the systemic corruption and lack of rule of law in Guatemala that is the impetus to the nation’s mass exodus migration northward.