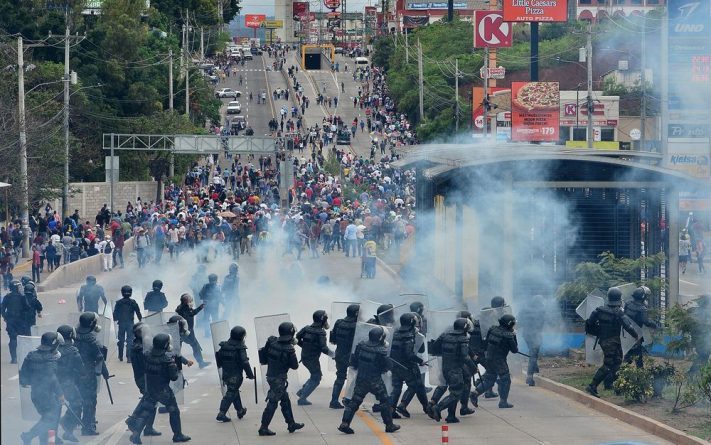 Protests against President Juan Orlando Hernandez are likely to continue as the anniversary of the 2009 coup approaches.

Mass demonstrations began nearly two months ago, when teachers and medical professionals took to the streets to protest a series of decrees they say facilitate the further privatisation of health and education.

The movement quickly evolved into nonstop multi-sector nationwide protests and blockades demanding “Fuera JOH” (Out With JOH), using the acronym for the president’s name.

At least three protesters have been killed and more than 20 wounded in the last four days alone.

Here are five key things to know about the crackdown.

1. What are the roots of the crisis?
On June 28, 2009, soldiers abducted then-President Manuel Zelaya and flew him out of the country, just seven months before his term was set to end. The Liberal Party’s candidate, Zelaya was elected on a centrist populist platform, but had gradually shifted a little to the left as he made alliances with social movements and left-wing Latin American governments.

Protests erupted and lasted for months. Later that year, elections were held, which many considered illegitimate. The National Party came to power and has controlled the government ever since. Hernandez was first elected in 2013.

The Honduran constitution includes a strict ban on presidential re-election that cannot be reformed by courts or Congress, but a controversial and convoluted Supreme Court ruling in 2015 paved the way for Hernandez to run in 2017 as an incumbent.

In an effort to stop Hernandez’s reign, the left-wing LIBRE party that grew out of resistance to the coup joined forces with the small PINU party and Salvador Nasralla to form the Opposition Alliance Against the Dictatorship. A former television sportscaster turned anti-corruption crusader, Nasralla became the alliance’s presidential candidate.

Nasralla had a purportedly unshakable five-point lead when the preliminary results of the November 26, 2017 elections were announced. But the election data transmission went offline for hours and when it came back online, Hernandez quickly overtook Nasralla. The country erupted in protests and blockades that went on for months.

The government declared a state of exception. Police and military forces, especially the military police created by Hernandez, cracked down on protests. A UN agency concluded security forces shot and killed more than 20 protesters and bystanders. Honduran human rights groups put the number at more than 30.

The Organisation of American States stated that the election results could not be trusted and called for new elections. But the US government recognized Hernandez as the winner weeks later, and a political crisis with frequent protests has been simmering ever since.

2. Why did the current protests start?
Since the coup, the Honduran government has increasingly privatized energy, telecommunications, potable water systems, natural resources, and health.

After learning about a series of executive and legislative decrees that teachers and health workers said could facilitate the decentralization and privatization of education and health, protest marches were organised in Tegucigalpa, the capital, and around the country in April.

Teachers and health workers also formed the Platform for the Defense of Health and Education in Honduras to organice and demand the government repeal the decrees as a condition for dialogue.

Like previous privatisation bills, the decrees were implemented in response to the dictates of the International Monetary Fund, said Amador. The government eventually repealed the decrees, but it was too late. There was no faith in a government-led dialogue process and the movement had transcended the health and education sectors.

“The movement has expanded,” said Carlos Amador, a teacher and longtime activist.

“People can’t take it any more,” he told Al Jazeera.

3. How did the protests evolve?
Teachers and health workers began the protests, but rural communities, social movements, indigenous organisations, neighborhood collectives, and diverse sectors around the country soon joined, according to Yessica Trinidad, coordinator of the Honduran Network of Women Human Rights Defenders.

RELATED CONTENT: Why Hondurans Set Fire to the US Embassy

“In the streets, people are shouting Out With JOH,” Trinidad told Al Jazeera.

As the sectors participating in demonstrations and blockades broadened, so too did the demands. The unifying focus now is kicking the president out of power.

“People are fed up. They are tired of so much corruption, of so much impunity,” Trinidad said.

“The issues are structural. First, we need that man to go,” she added, referring to the president.

Hernandez has repeatedly called for dialogue with the health and education sectors, and initiated a process with government-aligned groups. The Platform for the Defense of Health and Education in Honduras is not participating and instead began an alternative dialogue gathering this week with social movements.

“We are in a very important upsurge of struggle at the moment,” Trinidad said.

4. How is the government responding?
Military and police forces have used tear gas to disperse protests, but they have also fired live ammunition. Security forces have shot and killed several protesters over the past seven weeks, according to Honduran human rights groups and local media. Dozens more have been wounded.

Luis Enrique Maldonado, 29, was shot in the head and killed Wednesday in Tegucigalpa. Erick Peralta, 38, was injured and died Wednesday night. Eblin Noel Corea, a 17-year-old student, was shot and killed Thursday at a local protest in the La Paz department in southwestern Honduras.

Police special forces began a work stoppage Wednesday, claiming they did not want to repress protests, and other rank and file police officers joined Thursday. But they negotiated a deal Thursday night with the Secretariat of Security and returned to work on Friday.

In the midst of the police work stoppage and growing protests, Hernandez announced on Thursday that the military, police, intelligence, and other forces were being deployed nationwide to protect property and safeguard the right to freedom of movement, a likely indication that security forces will crack down on road and highway blockades.

“The armed forces, the national police and the other defence and security forces are being deployed nationwide and will remain so,” Hernandez said on Thursday.

An emergency session of the National Defense and Security Council that began Thursday morning will be an ongoing session to discuss further measures, Hernandez added.

“There is a lot of repression,” said Trinidad. “There is fear, but it is not a paralyzing fear.”

5. What is likely to happen next?
The real power in Honduras does not lie in the three branches of government, according to Hugo Noe Pino, an economist and the Minister of Finance during the administration of Zelaya, deposed in 2009. The future of the Hernandez government rests with the three true powers: the Armed Forces, the US Embassy, and the economic elite, he said.

“The private sector is divided,” Pino told Al Jazeera. “There is concern about the economic impact.”

Road and highway blockades are costing businesses millions. Exports cannot always make it to ports and land borders. There are fuel shortages around the country.

“Many elements of the private sector are calling for the president’s resignation,” said Pino, but he emphasized that Hernandez also has strong allies among the economic elite.

There has been no public indication of dissent by the other two powers identified by Pino. On Wednesday, the Honduran Armed Forces presented US Embassy Charge d’Affairs Heide Fulton with its highest honor, the Gran Cruz medal.

“We are confident Hondurans can resolve their differences with dialogue and peacefully for the good of the whole country,” Fulton tweeted on Thursday.

Realistically, expectations in Honduras for a peaceful resolution through dialogue are few and far between. Either a sustained violent crackdown will quell protests and result in the continuation of a long-simmering crisis, or Hernandez will be forced out of office.