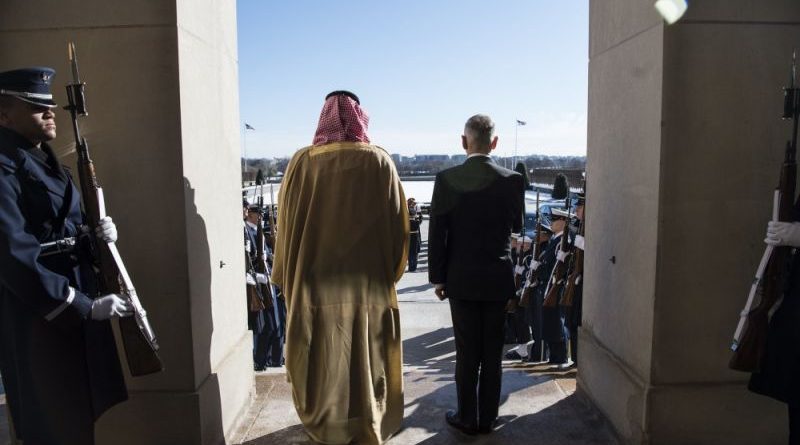 The following is an excerpt from Martin Lukacs’ new book, The Trudeau Formula: Seduction and Betrayal in an Age of Discontent, released this year by Black Rose Books. You can read Canadian Dimension’s review here.

In late, April 2019, the stunned friends and relatives of Abdullah Salman Al Asreeh held a prayer ceremony for the 24-year old man in Toronto. Without a warning by phone-call, they had learned on the evening news that he had been executed by the Saudi government.

He was among 37 men, most belonging to the country’s persecuted Shia minority, killed in one of the biggest executions in recent Saudi history. Al Asreeh, just 20 at the time of his arrest, was a human rights activist and worked on his father’s farm near the town of Awamiyah in Saudi Arabia’s eastern province. “He was a normal person,” his cousin said. “He wanted to build his life, but the government didn’t give him a chance.”

Awamiyah, long a centre of protest, had been targeted by Saudi security forces for a massive raid in 2017. It soon emerged that the operation—which killed more than two dozen civilians, razed an historic neighbourhood, and displaced tens of thousands of people—had involved Canadian military combat vehicles. But the Liberal government didn’t seize the chance to collect evidence and make it the basis for a re-evaluation of their exports. They undertook a breath-taking exercise in white-washing.

Since 2011, residents in Awamiyah had protested peacefully to demand equality for Shia. It was the country’s brief Arab Spring-moment, soon brutally crushed. A popular cleric and driving force behind the movement, Sheikh Nimr al-Nimr, was charged with “terrorism.” It didn’t matter that Nimr had been a vocal advocate of non-violence, preaching that the “weapon of the word is stronger than bullets.” After a rigged trial, he was executed. According to human rights organizations, several non-violent activists from the town were arrested, tortured, and faced death sentences, including Al Asreeh a few years later. Others fled or went into hiding.

To flush out these activists, the Saudi government announced it would demolish—“renovate,” in their words—the town’s oldest neighbourhood, Al-Masora, a 400-year old walled village lined with narrow streets, mosques, farmers markets, clay buildings and sea-stone houses. The situation was closely monitored by the United Nations’ special rapporteurs on cultural rights, adequate housing and extreme poverty. The UN experts petitioned the Saudi government to halt the planned demolition, which in their words threatened “the historical and cultural heritage of the town with irreparable harm, and may result in the forced eviction of numerous people from their businesses and residences.”

RELATED CONTENT: Haitian Canadian Tells Canada to Get Out of Haiti

When many families refused to leave their homes, the Saudi government cut-off their electricity and water-supply. Soon after, Saudi security forces laid siege to the town, with some residents taking up arms in self-defence. According to testimonials collected by Human Rights Watch (HRW), the Saudi forces shot into populated areas, occupied a public school, closed clinics and pharmacies, and barred access to ambulances.

The siege, which “surrounded and sealed off” the town, continued for months. One resident told HRW that “the town was constantly bombarded by shelling and security forces were going around shooting in residential neighbourhoods at random. We were too scared to leave our homes and most of the shops were shut down or burned. Anything that moved became a target.” Some 20-25,000 of the town’s 30,000 population were forced to flee. By August, Saudi security forces had forced out “terrorists and criminal elements,” they claimed, and completed the demolition of its oldest neighbourhood. “The scale of devastation was shocking,” wrote a BBC journalist who was a rare reporter allowed by the Saudi authorities to visit. “It looked like a war zone—as if we were in Mosul or Aleppo.”

Fenton wrote an email to Globe & Mail journalist Steve Chase, who, according to government documents released through access-to-information, forwarded the email to the Ministry of Global Affairs, asking for comment. A flurry of emails passed between government officials and Minister Freeland. By the time the news hit the front pages, Minister Freeland was already announcing an investigation. “I have instructed our department and my officials to very energetically and very carefully review the reports and review the information, and research what is happening,” Freeland said, while temporarily suspended permits for the export of Terradyne vehicles.

“It is something that I’m checking on a very-very regular basis, this is a serious issue. Obviously we have to look into it and investigate carefully and we have to be sure that we’re acting on fully reliable information we can stand by. Having said that, we need to act with a real sense of urgency.”

Six months later, in February 2018, Freeland announced the outcome of the investigation. What was the conclusion of this very serious, very diligent, very reliable undertaking? “Officials at Global Affairs Canada found no conclusive evidence that Canadian-made vehicles were used in human rights violations,” Freeland told the Parliamentary foreign affairs committee. “That was the independent, objective opinion of our public service and the advice given to me as minister.” The export of the armoured vehicles recommenced.

The investigation itself, released in partially-redacted form months later, makes for fascinating reading.“There is no credible information,” it states, “that Saudi Ministry of Interior forces committed serious human rights violations in the conduct of that operation, with Gurkhas or otherwise.” The use of force, it suggests, was “proportionate and appropriate.”

Had they interviewed residents of Awamiyah, who might have quibbled with this view? No. Had they spoken to the human rights organizations that had documented far from proportionate actions? No. How about the United Nations experts who had issued warnings about the consequences of Saudi actions? No again. Their sources were “close allies and like-minded partners,” mostly, it turns out, unnamed Saudi government officials.

What kind of picture had these Saudi officials helped Canadian investigators draw? Coincidentally enough, one that corroborated the self-serving perspective of the Saudi government. The town was not an courageous epicentre of civil resistance, but a “haven for criminality.” Its situation was “deteriorating,” not because the state had set itself to bulldozing a neighbourhood against the will of its residents, but “due to militancy in the Shia community.” Saudi forces were “deployed in response to increased security threats” and “made a concerted effort to minimize civilian casualties.” No mention of years of violent harassment of peaceful activism. And that video evidence of the Canadian armoured vehicles rolling through the town’s street? It was dismissed as not providing “any insight as to the context or nature of the activity.”

The only organization named to back up the investigation’s findings was the Saudi National Society for Human Rights, which “did not express concerns about the conduct of the operation.” Why might this have been? Perhaps because this “human rights group” is funded by a trust of former Saudi King Fahd’s estate, is populated by government figures, and was in fact created by the Saudi dictatorship to ward off calls for more meaningful reform (none of which is mentioned in the Canadian government’s report).

One person described by investigators as a “credible military source”—whose identity is blacked out—advised them that the operation was “considered to be proportionate, necessary, and timely.”

The investigation concluded by expressing concern for Terradyne, which would lose business if they couldn’t sell the custom-made vehicles selling to the Saudis. “It is reasonable to expect that the Kingdom of Saudi Arabia would continue to use Ghurkas to mitigate risk to security forces during the conduct of legitimate security operations.” But there was yet more astonishing commentary. “While one can question the wisdom of the Saudi plan to evacuate and raze the old section of Al-Awamiya and the manner in which the operation was conducted, one cannot dismiss the security-related motivations at play in the exercise.” Question the wisdom? In its haste to protect and preserve a major arms deal, the Canadian government had stooped to toying with a justification for the political cleansing of a city. When a group of NGOs called for a truly independent investigation, it was no surprise that it went unacknowledged by the government.