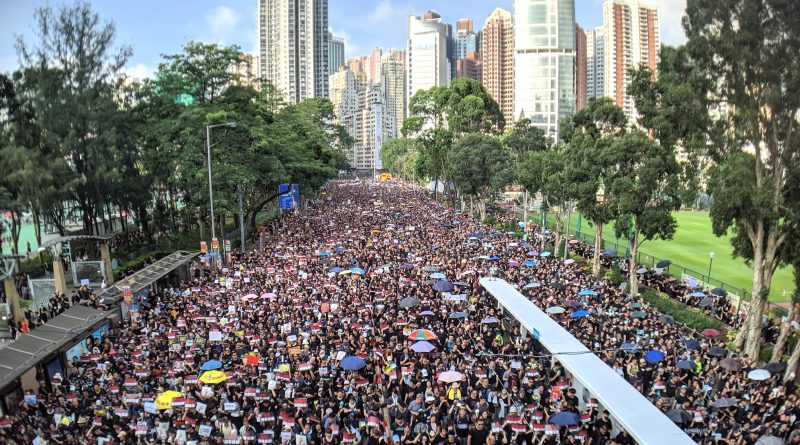 As you will see in this posting, it is entirely possible that a Washington-based and Congressionally funded institution is responsible, at least in part, for the lack of calmness in Hong Kong.

A few weeks ago, I wrote this posting on the National Endowment for Democracy or NED, America’s instrument of democratic promotion around the world, that is, democracy American style.  NED was founded in 1983 during the Reagan Administration with the following Statement of Principles and Objectives:

“Democracy involves the right of the people freely to determine their own destiny.

The exercise of this right requires a system that guarantees freedom of expression, belief and association, free and competitive elections, respect for the inalienable rights of individuals and minorities, free communications media, and the rule of law.“

While NED touts itself as a “private” foundation, in other words, it is independent of government. That could not be further from the truth.  Here’s what NED has to say about itself that belies its true character:

“NED is a unique institution. The Endowment’s nongovernmental character gives it a flexibility that makes it possible to work in some of the world’s most difficult circumstances, and to respond quickly when there is an opportunity for political change. NED is dedicated to fostering the growth of a wide range of democratic institutions abroad, including political parties, trade unions, free markets and business organizations, as well as the many elements of a vibrant civil society that ensure human rights, an independent media, and the rule of law.

This well-rounded approach responds to the diverse aspects of democracy and has proved both practical and effective throughout NED’s history. Funded largely by the U.S. Congress, the support NED gives to groups abroad sends an important message of solidarity to many democrats who are working for freedom and human rights, often in obscurity and isolation….

From its beginning, NED has remained steadfastly bipartisan. Created jointly by Republicans and Democrats, NED is governed by a board balanced between both parties and enjoys Congressional support across the political spectrum. NED operates with a high degree of transparency and accountability reflecting our founders’ belief that democracy promotion overseas should be conducted openly.” (my bolds)

Despite its proclamation that it has a “nongovernmental character”, NED receives its funding through an annual appropriation from Congress through the Department of State making it little more than another mouthpiece for Washington’s agenda.  NED promotes Washington’s global agenda through direct grants to more than 1600 non-governmental groups that are working for “democracy” in more than 90 nations around the world.

Let’s look at NED’s activities in Hong Kong for 2018 according to its website.  Here are the projects that were funded over the period from 2015 to 2018:

RELATED CONTENT: The Hong Kong Protests are an Attack on Socialism

Notice that the 2018 funding to the National Democratic Institute for International Affairs was granted to “facilitate engagement on Hong Kong’s growing threats to guaranteed rights”. That certainly sounds like promoting democracy to me. NED spent a total of $1,357,974 on grants to organizations that were promoting freedom, democracy and human rights in Hong Kong over the period from 2015 to 2018. Unfortunately, we don’t know what NED spent on promoting democracy in Hong Kong in the timeframe prior to 2015. While, in the grand scheme of what Washington spends this is not a great deal of money, it is the principle of what Washington is attempting to create in Hong Kong that is of concern. This is a very clear example of meddling in the internal affairs of China and Hong Kong, actions that will only serve to anger China who is the also the recipient of a great deal of NED’s attention. It is also key to remember that there are likely other taxpayer-funded programs through which Washington is attempting to influence what happens in Hong Kong.

In my opinion, this tweet by the conservative-leaning Washington Examiner is a dead giveaway to the source of the unrest:

Demonstrations have shutdown the city’s airport for a second consecutive day and put the entire Chinese city on edge. pic.twitter.com/ZrYE5DzZYU

While the ideals of democracy are admirable and desirable, Washington’s version of democracy is tainted by big money and has developed into a system where politicians are for sale to the highest bidder. This is not the democracy that most of the world wants. Long-term Congressional meddling in other nations internal affairs through its funding of the National Endowment for Democracy is little better than the nation reengineering exercises undertaken by the Central Intelligence Agency since the end of the Second World War.