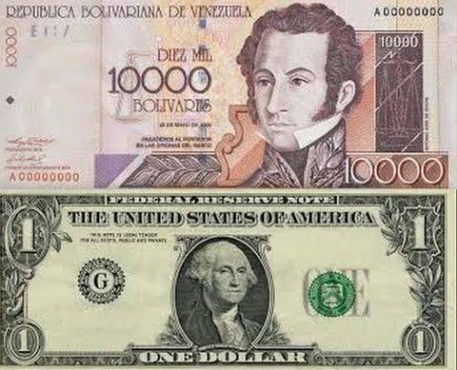 The loss of the value of the bolivar, although it is due to a criminal attack on our currency, is one of the reasons why those who have the ability to save try to migrate to “stronger” currencies to protect their assets.

By Pasqualina Curcio
The problem is exacerbated when, those who have the currencies want to buy goods and services within the economy but there are not enough bolivars. For example, suppose John Doe received $ 100 of remittance two months ago and decided to exchange them to buy food. Suppose further that at that time, the exchange rate published by the criminal web portal (dolartoday) was 1 BsS / US $ and the amount of bolivars circulating in the economy was BsS 1,000. When Fulanito exchanged the dollars, he was given 100 bolivars, that is, 10% of the total money circulated.

RELATED CONTENT: Blockade “Reloaded”: Will the Economic Policy Remain the Same?
Last month he received US $ 100 again and the portal marked a manipulated exchange rate of 10 BsS / US $. Therefore, when exchanging them to buy food they had to give him 1,000 bolivars. If the central bank of the country where John Doe lives has not understood that in the face of hyperinflationary situations that are induced by the attack on the currency, the amount of money should be increased and not maintained or reduced in real terms, it will happen that the 1,000 bolivars that Fulanito is waiting for represent 100% of the total money circulating in the economy.

RELATED CONTENT: The US Terrorist War Against Venezuela
If this month you receive another US $ 100 and the portal marks 100 BsS / US $, you should give Fulanito BsS 10,000, but since the central bank is still trapped with the dogma of the “monetarist discipline”, there will not be enough bolivars, there are only 1,000. If John Doe also arrives at the establishment where he wishes to buy the goods and encounters a sign that says “Dollars are accepted”, he will choose to save the exchange process and pay with the green bills.
The problem is further aggravated when the owner of the establishment has the same issue: having received dollars, he must exchange them to pay his suppliers and even his workers and it is achieved with few bolivars, which results in the fact that in the circuit of the dollar economy is increasingly occupying space and displacing, albeit informally and illegally, the Bolivar.
We need to hurry and address this issue. It might be late if we leave it for later.