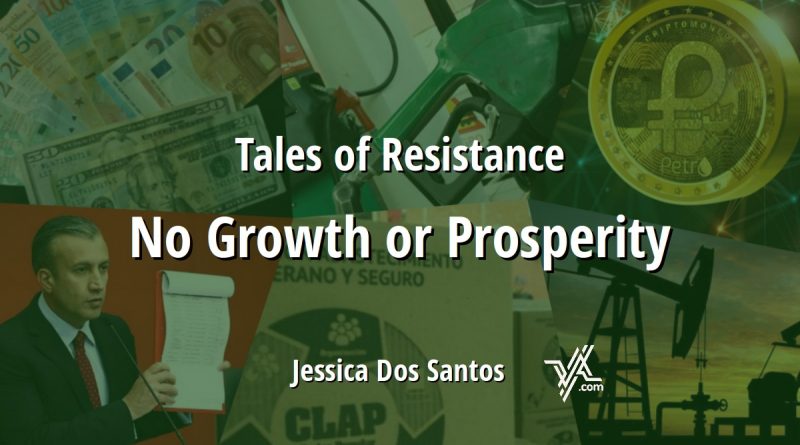 VA columnist Jessica Dos Santos examines how the economic reforms announced one year ago have not exactly worked in bringing about “growth” and “prosperity.”

It was August 17, 2018, a Friday evening, when President Nicolás Maduro announced a minimum wage increase to 1.800 Sovereign Bolivars, a sixty fold increase. The measure would come alongside an announced monetary reconversion.

As most other waged mortals, I was emboldened, and with my masterful “1+1 equals 2” reasoning I decided to spend all the money I had in my bank account and especially in my credit cards: “No worries, with my next paycheck I’ll cover it all,” I thought.

However, the next morning, when I went out, an endless number of shops were either closed or displaying their shiniest signs: “There’s no chicken,” “Electronic payment not working,” etc. It seemed like nobody was willing to sell their products at current prices before having to restock at “reconverted” prices, which would be much higher.

Nevertheless, the major chains took the risk. That’s how, for the first time in many years, I had the “luxury” of buying shampoo, soap, toothpaste, etc, in one single shopping trip. One way or another, for a brief moment, “normality” (as I used to know it, of course) had returned to my life.

In fact, that following Monday, when the reconversion came into effect, I went to the ATM and there was cash available. And the amounts per withdrawal allowed to pay for a whole week’s worth of public transportation tickets, not just one afternoon!

Furthermore, that very Friday we found out that the measures were part of a plan that sounded so bombastic it brought us hope: “Economic Recovery, Growth and Prosperity Program.”

The program had nine (later ten) main policy guidelines which all sounded very plausible, and in most people’s heads there was one way or another of implementing them.

So, what has happened in the year since the unveiling of this seemingly spectacular suitor, who looked like the perfect candidate to father a bunch of kids?

RELATED CONTENT: William Izarra: “The Rebellious Venezuelan People do not Agree with the Way Traitors are Being Handled”

Let’s go point by point (with quotes from Maduro’s televised address on August 17, 2018):

1. “Fiscal balance: we will collect a lot more money for the social development of the country.”

Ok: As of right now none of this has been achieved. The tax legislation on large estates will only come into effect in October. But, on the other hand, we have taxes pegged to the Petro [cryptocurrency] as a sort of “disguised dollarization” that is killing any small business that looks to stay on its feet and operating legally. Furthermore, the collected taxes are not reflected anywhere: potholes still rule the streets, traffic lights remain unreliable, garbage is not collected on time, etc.

2. “A new foreign exchange policy: the National Constituent Assembly abolished the illicit exchange law and we will have a new, unique, floating exchange rate. We’re going to defeat the criminal [black market] dollar.”

Right: we have a runaway parallel dollar and an “official” exchange rate constantly playing catch-up after a liberalization of exchange controls which in practice legalized the black market. Both are on their way towards 20.000 Bolivars per USD. One year ago the exchange rate was 60.

Hmmmm: the minimum wage today is around $2.50, heading for the lowest levels in history.

4. “Price stability: we’re going to set the prices of basic staples, we’ll go for Plan 50 [50 staples with fixed prices], and those prices will be obeyed.”

Let’s see: following these announcements we saw Economy Vice President Tareck El Aissami and an endless number of businessmen agreeing upon and signing off on “fixed prices” of eight personal hygiene and thirty food products, but these prices were never obeyed. I’ll say it again: never.

When it comes to campesinos, we have some comrades that have been struggling for a year to have promises made by Maduro on national TV (solving land disputes, combatting targeted killings, and support for production among others) fulfilled. Meanwhile, in the oil sector, OPEC monthly reports have shown little success, with production continually down.

The current picture: Venezuela’s accumulated imports in the first half of the year were of just $2,986 million, an amount that shows a severe 58 percent contraction in comparison with the same period last year.

7. “Stability and expansion of the Petro [cryptocurrency]: I wish that in the short term Venezuelan citizens will have direct access to the Petro, to make international payments, to invest on a trip, a house, a car.”

As of now, there is a party because some shady fancy stores are taking payments in Petros. Beyond that, most mortals are yet to grasp the exact status and purpose of this “cryptocurrency.”

8. “Transportation policy: we won’t go on allowing Colombian mafias to steal our gasoline. Not one more liter! We’re going to do a transportation census through the Homeland Card, towards establishing international prices and direct gasoline subsidies.”

The reality: the census was made and millions took part, while a biometric system was trialled in the main pumping stations across the country. But today those are fading memories and nobody knows how much to tip the pumping station workers, because in spite of a tremendous budget deficit, gasoline in Venezuela is free.

Well, in some states the CLAP box deliveries have become ever more irregular. The contents of the box have also decayed, and hygiene products never made it in. For their part, [government-assigned] bonuses suffered the same fate as salaries: they are completely pulverized by reality.

10. “Savings Plan: it’s a special savings program tied to gold and the Petro, with savings plans for professionals and the middle class, for pensioners.”

I confess: I never bought a savings certificate in gold or Petros. My income never allowed for that. And, in truth, I was never given any reason to trust this: two months after resigning from my job (after ten years working in the public sector) I’ve yet to get the money from my social security savings plan (which lost its purpose ages ago) and to receive my severance payment.

Before the unblemished condemn me to the firing squad (though they will anyway), let me clarify: yes, I know perfectly well about the deadly effects that US sanctions have had on some of the points listed above. To be clear: on some of them. In others there was a lot more to be done, yet here we are: much more “fucked” than before the plan that was to bring us “growth” and “prosperity” was implemented.

With such a precedent, I was almost scared when I heard Vice President Delcy Rodriguez announce that a “new initiative” is coming up this week. “Maybe best to leave it like that,” my mother usually says when it starts looking like the cure is worse than the disease. There’s a universal truth to that.