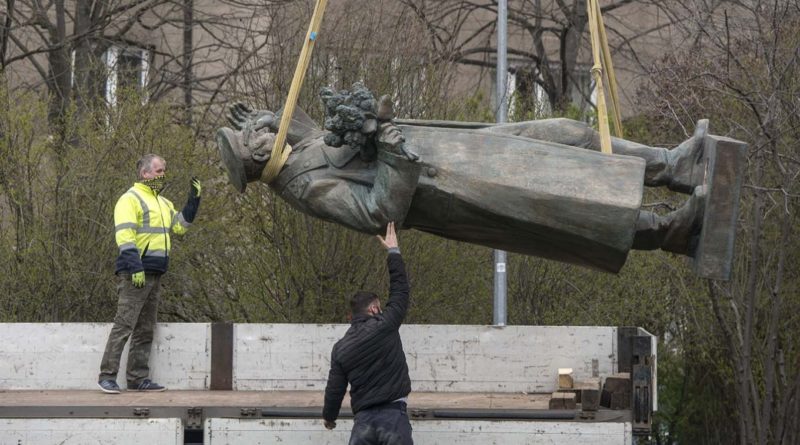 Soon, there might be silence. The liberation of Prague, as well as the liberation of Auschwitz and or Warsaw by the Red Army will be forgotten. At least in Europe, even in Eastern Europe, where it took place.

This is where it is all leading to. Perhaps, one day, East European governments will issue new orders to desecrate cemeteries and mass graves, all those resting places of the Soviet soldiers who, some 75 years ago, gave their ultimate sacrifice. These graves once embraced hundreds of thousands of Soviet kids and young men, who against all odds and with unimaginable courage pushed the Nazi hordes away from the devastated Soviet cities and villages, through the burned fields and forests, first towards Warsaw and Prague, Budapest and Sofia, and then, finally, all the way to the center of Berlin.

One of its greatest military leaders, in fact a military genius and true hero, Marshal Ivan Konev, commanded the 1st Ukrainian Front, the one which liberated both the Auschwitz concentration camp in Poland, and later Prague.

RELATED CONTENT: 90 Tons of Humanitarian Aid From Russia, WHO and UNICEF Arrived Today to Fight Covid-19

In order to please its NATO masters, as well as those in Washington, Prague’s petty politician unceremoniously removed the statue of its liberator, insulting it during the process with repulsive COVID-19 mockery.

“A monument to Soviet Marshal Ivan Konev, who commanded the forces that liberated Prague from the Nazis in 1945, has been removed and mocked for ‘not having a mask’ by one local official, in what Russia has condemned as an insult…”

Famous Czech black humor”? No, this is not Soldier Svejk. It is dark sarcasm, inexcusable, full of collaboration zeal. In the West, there is an era of insulting everything Soviet and Russian. And some Czechs, as well as Poles, are desperately trying to be accepted as members of the elite club of the countries which has been, for centuries, plundering the world.

“He didn’t have a mask on. Those rules apply to everybody. You can only be outside if your mouth and nose are covered, “district mayor Ondrej Kolar joked on Facebook, prompting a multitude of angry responses.

Some commenters suggested that Kolar had “his brain affected by the coronavirus” and reminded him that he would have never been born, much less a mayor, had Konev’s troops not liberated the city from the Nazis. The monument actually predates Kolar, who was born in 1984, by four years.”

Not everything is lost. Czechia is a complex nation. It may be full of neo-liberals, as well as collaborators with Washington, but unlike Poland, it is also known for its critical and extremely well-educated population.

Its Communist Party of Bohemia and Moravia consistently finishes third in the country’s elections. Czechs never joined the Euro zone, maintaining its stable currency – crown (koruna). Throughout the war in Syria, Czechia was the only EU country that maintained its embassy in Damascus, open and active. It is also a well-known fact that several key Czech politicians are insisting on maintaining good relations with Moscow, despite Czechia being a member of both NATO and the European Union.

A friend of mine, a fellow Czech philosopher and performer, Milan Kohout, agreed to send a comment for this report:

“Taking down the monument of Soviet Marshal Ivan Konev who commanded the forces that liberated Prague from the Nazis in 1945 is the final culmination of the brainwashing process of the young generations of the Czech citizens, who were born years and decades after the liberation of Prague.

I guess I am already old enough to see how even during my life the governing systems which are presently in power, can completely twist the historic facts and literally piss on the graves of so many young Soviet soldiers who died to liberate Czechoslovakia from the brutal occupation by the German Nazis.

Recently, I lived again for several years in Prague, and personally witnessed that process; the power grab by the right-wing. This process is now celebrating victory by erasing the memory of the suffering of their own grandfathers and grandmothers. But I hope it will just be an illusionary victory, a short-lived one, shallow – so typical for neoliberalism.”

After Tweeting the link to the RT report, and after expressing my outrage, I received several replies from Czechia, almost all of them reconciliatory. One of them summarized the general mood:

“Please do not think that what happened reflects the mood of the entire Czechia, Andre. One thing is the Euro-dictatorship and U.S. “protectorate”, the second thing is the Prague 6 district and its mayor who is a member of an absolutely insignificant political party. The third thing is the rest of the country, which votes quite differently, and would never allow such idiots to lead the nation.”

“Konev will return”, wrote others.

The political situation in Czechia is complex. Ondrej Kolar made a huge blunder. Trying to play into the hands of the anti-Russian and anti-Soviet forces at home and abroad, he actually managed to repulse and outrage his fellow citizens. He stirred discussions about propaganda, even about the position of his country on the world stage.

Many Czechs do not like the global dictatorship of Washington. Many are disgusted by the European Union. Removing the statue of Marshal Konev brings many questions into the spotlight; some of them ugly, some extremely dreadful.

One of them is: who is behind such insulting and twisted events?

It goes without saying, that the tremendous propaganda attacks against Russia and the Soviet Union, do not originate from Prague. They come from Washington, London, Berlin and Paris. And their goal is to reverse and pervert history, and to equate the Soviet Union (the country which defeated and destroyed Nazism and colonialism in its original form), with Nazi Germany.

Of course, it is only Western imperialism and colonialism that can be, logically, compared with Nazism.

Now that the second stage of colonialism has returned, brutalizing all corners of the world, the West is desperate to discredit its most determined enemy.

This writer and this magazine will, in the near future, examine this angle, determinedly and in detail, as it is essential to the survival of our planet.

The removal of the statue of Marshal Konev is an extremely significant act of intellectual vandalism. It is also an insult, to the millions of Soviet people who lost their lives, liberating the world from tremendous evil.

Russians are accustomed to the insults. For centuries they have faced attacks, injustice, and smears: for being straightforward, for being different, and for standing by its allies, for defending those who lost all hope.

The things that Russians cannot stand and forgive, are outright lies. As well as when people spit on the graves of their heroes. Heroes who fought for a better world are revered there. The country is built on their legacy, as it is built on the legacy of great thinkers, poets and musicians.

Intuitively, those Czechs that are now expressing outrage with their own politicians, are aware of it. For centuries, Czech intellectuals looked up to Russia; a big Slavic brother.

The detachment, even hostility between the two nations, is something unnatural; something that may and should end, soon. The lies and silence should end immediately.

May this one more hostile act serve as a catalyst of change. May resistance to it trigger a new chapter of improved relationships between the two Slavic countries.