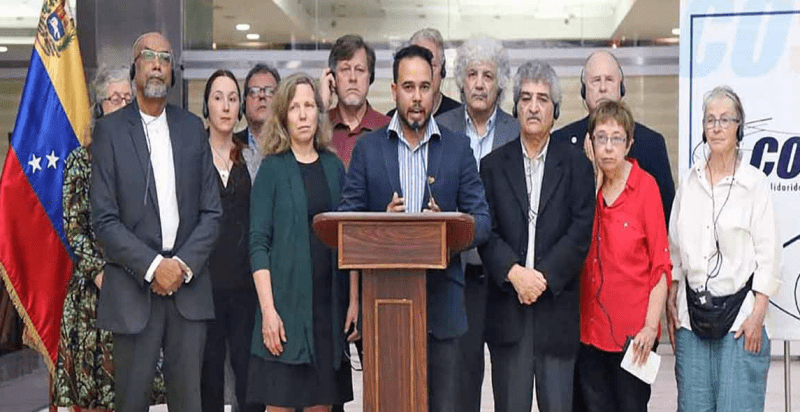 Delegates from three US international peace councils and Canada denied there is a humanitarian crisis in Venezuela and pointed out that these are media lies.

Activists of the World Council for Peace in the United Nations (UN) , the United States Peace Council (USA) and the Canadian Congress for Peace, assured that, after visiting Venezuela, they found out there is no humanitarian crisis in that country and that, in this regard, the hegemonic media of the world lies about the Venezuelan reality.

The member of the Council of the Peace Council of the United States, Ajamu Baraka, affirmed that the country does not suffer from a humanitarian crisis, as expressed by US President Donald Trump, and that “it is unfair that the main human rights violator should worry about the welfare of Venezuelans when 30,000 people die in their country due to malpractice in the health system”.

“Donald Trump in no sense improves the politics of the world but represents the interests of some elites that is why Venezuela is a real threat to the Trump government because they can not let it be a success (…) Today the target is Venezuela tomorrow may be another country, “Baraka added.

Words to which the representative of the World Council for Peace in the UN, Bahman Asad, agreed. “There are a lot of people from the USA that carries a level of confusion about the policies of Venezuela, there are even sectors that oppose Donald Trump but supports the policies of interference against Venezuela because they have come to believe the lies that he says, that is why we will return to our country to counteract that argument about what we have lived here,” said Asad, who also accused the Trump government of demeaning the social policies of President Nicolás Maduro in the world.

RELATED CONTENT: Overthrow at All Costs: They Threaten Maduro With a Bullet in the Forehead

Opinions also shared by the president of the Peace Council of Canada, Miguel Figueroa, who condemned the policy of the Canadian Government against Venezuela, noting that the interests of his country for Venezuelan affairs do not respond to the welfare of the Venezuelan population but rather to the control of oil and mining.

The National Coordinator of the National Anti-War Coalition (UNAC), Joe Lombardo, reported also that the American Council for Peace has organized a protest in front of the White House (Washington) against attacks such as that Venezuela faces with the electrical system. “In response to these attacks, we are mobilizing the American people, we have an organized rally for March 30, in front of the White House,” he said.

Lombardo offered the remarks after a statement made by the Council of the United States (USA) and Canada for Peace, at the headquarters of the Venezuelan Foreign Ministry.