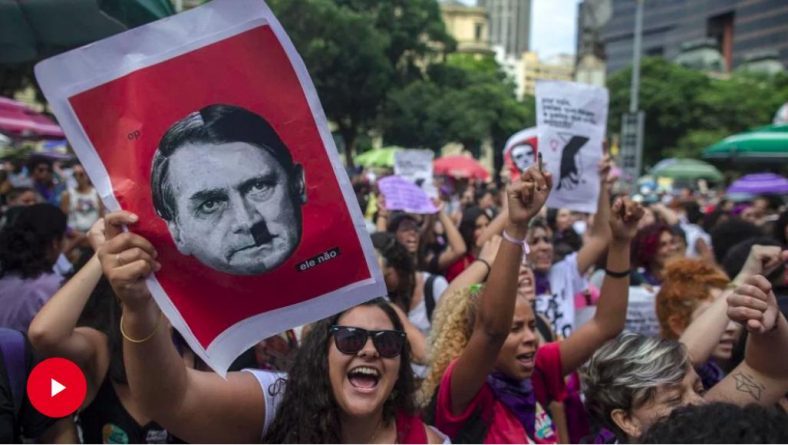 18/Mar/2019.- The president of Brazil made an unusual visit to CIA headquarters Monday and later spoke of his admiration for the United States on the second day of a trip that reflected his country’s shift to a more pro-American stance.

President Jair Bolsonaro, a far-right politician who succeeded a leftist who at times had a frosty relationship with the United States, arrived in the country with a half a dozen ministers and a goal of expanding trade and diplomatic cooperation between the two largest economies in the Western Hemisphere.

He was expected to meet Tuesday with President Donald Trump to discuss a range of issues, including ways to increase U.S. private-sector investment in Brazil and efforts to resolve the political crisis in Venezuela.

“Nowadays, you have a president who is a friend of the United States who admires this beautiful country,” Bolsonaro told an audience at the U.S. Chamber of Commerce.

Bolsonaro underscored the difference between his administration and that of former President Dilma Rousseff by stopping by CIA headquarters in Langley, Virginia, to discuss “international themes in the region,” according to his son, Eduardo, a Brazilian lawmaker accompanying him on his first bilateral overseas trip.

Eduardo Bolsonaro described the CIA as “one of the most respected intelligence agencies in the world,” in a tweet that was likely to raise eyebrows back home in Brazil, where the U.S. and its spy services have been regarded with suspicion in recent years.

In 2013, leaks from Edward Snowden revealed that the National Security Agency had wiretapped conversations of Rousseff, leading to several years of tense relations between the U.S. and Brazil.

“No Brazilian president had ever paid a visit to the CIA,” said Celso Amorim, who served as foreign minister under former President Luiz Inacio Lula da Silva and is a Bolsonaro critic. “This is an explicitly submissive position. Nothing compares to this.”

The far-right Bolsonaro was elected last year and is an admirer of Trump. He sought to underscore his pro-America stance with a tweet upon his arrival Sunday.

“For the first time in a while, a pro-America Brazilian president arrives in DC,” he said in the tweet. “It’s the beginning of a partnership focused on liberty and prosperity, something that all of us Brazilians have long wished for.”

Bolsonaro’s insurgent candidacy against the candidate of Rousseff’s party has been compared to Trump’s victory in 2016. The Brazilian president made the comparison himself in his speech to the Chamber of Commerce, describing how he has had to contend with “fake news” and tough coverage from established news organizations.

The speech came after the two countries signed several bilateral agreements, including one that allows the United States to use Brazil’s Alcantara Aerospace Launch Base for its satellites, and Brazil announced an end to visa requirements for U.S. tourists who visit the country.

Brazil is seeking U.S. help with its efforts to join the Organization for Economic Cooperation and Development and to expand trade. The Bolsonaro administration is seeking to reduce public-sector spending and privatize state enterprises to cut debt and grow its economy.

A senior U.S. administration official noted that the U.S. does have a $27 billion trade surplus with Brazil and that there are opportunities to bring the nations’ business communities closer. He said there are expected to be new initiatives on energy infrastructure.

The official, briefing reporters on condition of anonymity, noted that Brazil has a close relationship with Venezuela’s military and may be able to serve as a go-between with the security forces that continue to support Maduro.

Brazil, like the U.S., has recognized the leader of the National Assembly, Juan Guaido, as Venezuela’s interim president under the argument that Maduro’s re-election last year was illegitimate.

“We have to sort Venezuela out,” Bolsonaro said. “We cannot leave them the way they are. We have to free the nation of Venezuela.”