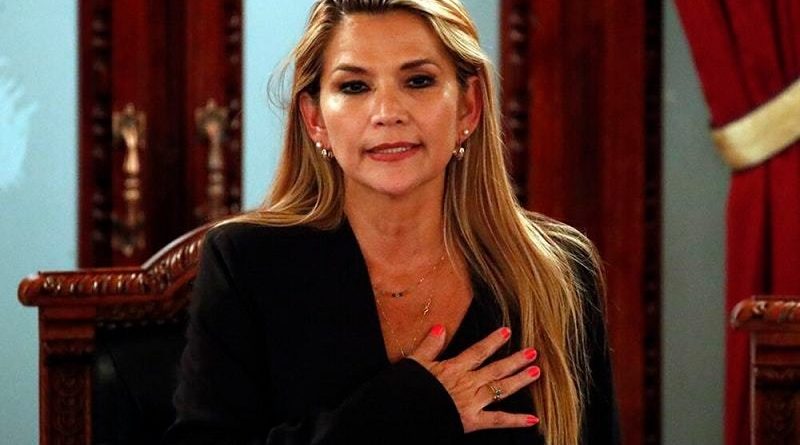 The individuals who seized power after the military coup in Bolivia don’t constitute a so-called “interim government” because the radical policy changes that they’ve implemented since then go far and beyond simply presiding over the state until new elections are held later this year in May.

The Hybrid War on Bolivia that overthrew democratically re-elected and legitimate President Evo Morales in a military coup captivated the world for a few weeks but then receded into the background after every Great Power “pragmatically” accepted the outcome in order to protect their own interests in the country. This took the form of describing the individuals who seized power as being part of a so-called “interim government”, but that label is factually incorrect because the radical policy changes that they’ve implemented since then go far and beyond simply presiding over the state until new elections are held later this year in May.

An objective assessment of their actions reveals that they really constitute the consequences of a US-backed coup which intends to completely reverse all of the reforms that were carried out under President Morales. No one should expect any of the Great Powers to officially make too much noise about this unless their interests are threatened, fearing that doing so will provoke the exact same outcome that their “pragmatic” stance aims to avoid. Some of them might “play to the crowd” by having their publicly financed international media outlets continue to run increasingly less frequent but nevertheless still critical articles, but that changes nothing.

It’s become a hobby — and even an obsession! — for some to try to “read the tea leaves” in attempting to interpret what any given state might secretly be plotting based on the coverage of their publicly financed international media outlets, but without any overt policy in support of the same criticisms that they’re promoting, then the whole act becomes nothing more than a case study in perception management. What follows are some of the most important policy changes undertaken since the coup which prove that describing those forces responsible as an “interim government” is factually incorrect and self-serving:

* President Morales Is Barred From Running In The Next Elections:

Despite being elected four times already with a convincing majority (even if the last one was supposedly “controversial” because it only narrowly surpassed 50% of the total vote), President Morales isn’t allowed to run in the next elections, which deprives the Bolivian people of the right to decide his political future.

* The “Interim Government” Accused Him Of “Terrorism” And Issued An Interpol Notice Against Him:

Not only is President Morales barred from running in the next elections, but he’s even regarded as a “terrorist” by the so-called “interim government” for his passion in remaining politically active even while in exile, which they believe is threatening enough to their hold on power that they demanded that Interpol capture him.

* The Movement for Socialism (MAS) Party Might Also Be Barred From Running:

President Morales is more than just a man, he symbolizes an entire political movement, and that’s why the “interim government” is contemplating whether or not to bar his Movement for Socialism (MAS) from running in the next elections since they’re afraid that the party’s possible victory would nullify the result of the coup.

Having initially been caught off guard by the massive grassroots opposition to the coup, the “interim government” swiftly moved to establish an “Israeli”-backed “anti-terrorist” squad that will likely follow in the footsteps of the hemisphere’s notorious death squads in order to suppress future dissent.

* Ties With Cuba & Venezuela Have Been Cut And Bolivia Withdrew From ALBA & UNASAUR:

On the foreign policy front, the “interim government” cut ties with Cuba and Venezuela after accusing them of organizing anti-coup protests, and then it announced that Bolivia is no longer a member of the ALBA and UNASUR multipolar blocs.

The “interim government” joined the Lima Group of US-backed regional states which are opposed to the democratically elected and legitimate government of Venezuelan President Nicolas Maduro, which is a predictable step for it to take after cutting ties with the country.

* The First Bolivian Ambassador To The US In 11 Years Was Just Appointed:

Continuing with post-coup Bolivia’s unipolar pivot, the “interim government’ just appointed the first Bolivian Ambassador to the US in 11 years, which proves that the country’s foreign policy reorientation is decisively pro-American and will only intensify if MAS doesn’t win the upcoming elections or has its victory stolen from it.

The decision to restore relations with “Israel” preceded the earlier-mentioned one about seeking its support for assembling an “anti-terrorist” squad that will predictably be used to suppress dissent, which makes sense since the self-professed “Jewish State” has the ignoble distinction of being one of the world leaders in this respect.

* A New Era Of Privatization Is About To Begin:

Every single one of the aforementioned policy changes is about protecting the new era of privatization that the “interim government” is planning to implement in order to profitably reward its foreign backers (as well as buy off other countries’ silence) and deal a death blow to President Morales’ socialist reforms.

As can be indisputably seen from the above-mentioned nine examples, the radical policy changes undertaken by the so-called “interim government” go far and beyond simply presiding over the state until new elections can be held later this year in May. They’re objectively the actions of foreign-backed coup conspirators who are being ordered to reverse all of the policies undertaken by President Morales’ government on both the foreign and domestic fronts, with the “main prize” being the privatization of this mineral-rich country’s state enterprises. No Great Power wants to recognize this because they also hope to receive a piece of the pie.