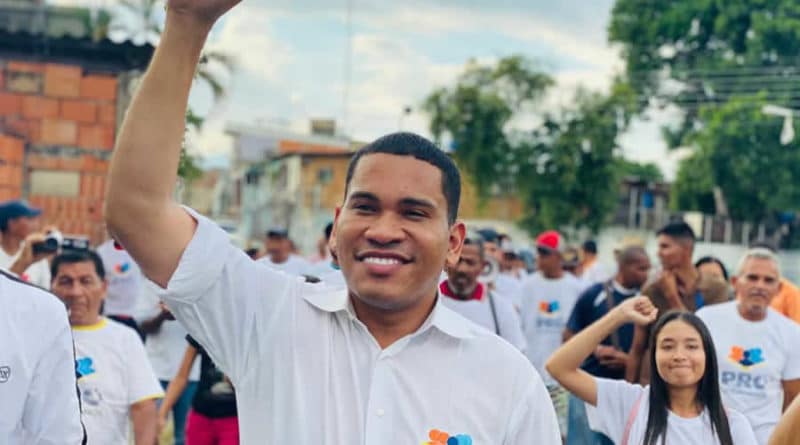 According to the investigative website “La Tabla,” the “Juan Guaidó project” may have its days numbered before a possible change of pawn in the files handled by the United States regime, to try to seize political and economic control of Venezuela.

The website published that recently Leocenis García, a 39-year-old journalist with a criminal record and historically linked to the Colombian drug cartels, especially with the supposedly extinct Medellín cartel, would become the replacement that the United States is looking for to replace the worn out and increasingly unpopular Juan Guaidó.

La Tabla posted that the most recent meeting of Leocenis García — who has advertising campaigns in different international news agencies to show himself as “an option” for Venezuela with the resources used for this purpose being unknown — with the secretary general of the Organization of American States ( OAS), Luis Almagro, “seems to show his ‘influence’ in the decision-making instances of the US government in foreign policy and its controlled international bodies.”

This would be the second “official” meeting held by García and Almagro, after they met in the US capital, Washington, in July 2019.

It highlights that the meetings have been held despite the almost inexistent “political weight” of whoever was the editor of Sexto Poder, a media outlet that was involved in drug money laundering scandals, tax evasion, promotion of pornography, and serving drug networks for illicit enrichment in Venezuela.

“This occurs despite the ungraspable political weight of the former ‘editor’, in the conflict for power in Venezuela. He has no record as a political leader, his Prociudadanos ‘party’ is not recognized by the CNE and yet he came to ‘control’ fraction of between 6 and 10 deputies,” La Tabla adds.

“In addition, Garcia can show a photo that others would like: with Mauricio Clavier, a member of the US Security Council, an IMF representative and Trump’s trusted man, to the point that he is considered the ‘key’ of the White House. His opinion decided the selection of Guaidó in 2018,″ says the thread of tweets published by the news website.

He adds that Leocenis García also met (on tour in July 2019) with Elliott Abrams, special envoy for Venezuela, Wyndee Parker, adviser to the president of the US House of Representatives, Nancy Pelosi, and Keith Mines, of the Department of State. Some interest arouses, no doubt.

According to La Tabla, “it does not seem coincidental that the information from the Garcia-Almagro meeting was released at the same time that in Miraflores the so called ‘collaborationist’ opposition (which participated in the selection of the new CNE) was meeting with President Nicolás Maduro. Leocenis García was not there.”

“Obviously the meeting with Almagro worries the Guaidó project, which remains in rigorous ‘quarantine’ while publicly losing US support. Meanwhile, Leocenis García deepens a “presidential” campaign aimed at the popular sectors, from his social network accounts” in which he assures that he is holding meetings with communities in different states of the country.

RELATED CONTENT: Bloodthirsty John Bolton’s Book Fueled by Frustration the President Hasn’t led the US Into a Major War

In 2008, Leocenis García was involved in a scandal when he violently attacked the headquarters of the newspaper El Periódico, located in Valencia, Carabobo state.

For this incident, he was apprehended and accused of “harassment, violation of premises, violent damage to property, illicit bearing of firearms and resistance to authority.”

According to an article published on Aporrea.org, García placed advertising for the Makled Foundation, owned by the drug trafficker Walid Makled and owner of El Periódico, at Sexto Poder. Then, when Garcia did not receive payment for the advertising space, he went to destroy the headquarters of the newspaper in Carabobo.

At that time, journalist Desirée Santos Amaral said that García did not have a resume but a criminal record, and that his links were not only with Colombian drug trafficking but also with prison gangs, including Wilmer Brizuela, who was a negative leader in the Ciudad Bolívar prison.

“Yes, I am a friend of Wilmer Brizuela, the pran (mafia leader) of Bolívar, and what is the problem?” García wrote on his Twitter account in 2011, according to the website.

In addition, different people who came to know García in his student days, assure that it is strange how, overnight, he became a millionaire businessman.

Leocenis García was director of the publishing group “Sexto Poder,” accused of tax evasion and money laundering. He was detained for alleged acts of corruption.

In addition, he is linked to the drug lord Pablo Escobar Gaviria, head of the Medellín cartel and he referred to him as “the greatest Colombia has ever had.” In fact, García confessed his admiration for Escobar and has even taken flowers to his grave.

García could never justify the multimillion-dollar income of Sexto Poder, in fact he never declared it before the due agencies, which is why they were frozen by the State, the Public Ministry explained at the time.