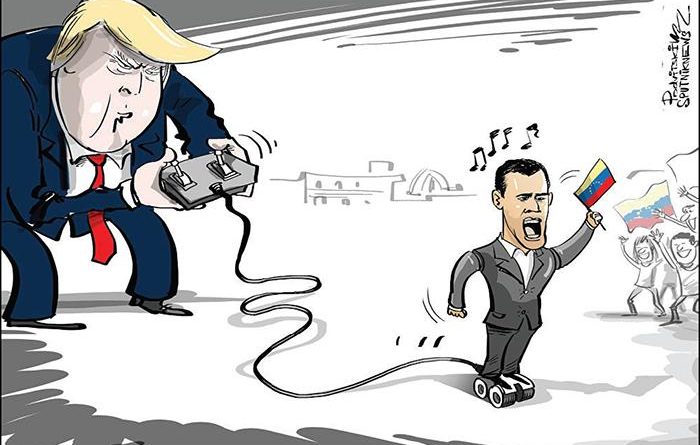 The Guaidó case has all the characteristics of CIA operations to overthrow governments not amenable to U.S. interests.

History is full of self-proclaimed kings, presidents and governors. Many are to be found in literature, as well, and some of these real and fictitious figures marked eras, while others end up as protagonists of some hilarious anecdote or after-dinner joke.
The Bible says that Adonijah, son of Jaguit, conspired with Joab, son of Sarvia, and the priest Abiathar, to gather his followers and relatives by the Stone of Zochelet in Enoguel, and proclaimed himself king of Judah, behind David’s back.

RELATED CONTENT: Guaido’s Chief of Staff Arrested: Plotting Terrorist Actions
Don Fernando de Guzman proclaimed himself, “by the grace of God, Prince of Terra Firma and Peru,” ignoring his allegiance to King Phillip of Spain. Guzman was not willing to share the riches of the mythical Dorado with any king across the Atlantic.
England, during the second half of the 15th century, was plunged into a chaos of intrigue and shifting alliances. Two irreconcilable sides, the Yorks and the Lancasters, fought to the death for the throne. The self-proclaimed kings were many, as ambitious men and women competed ruthlessly for the crown.
In his book The Lesser Evil, Maruan Soto Antaki tells the story of Joshua Abraham Norton I, who called himself the Emperor of the United States and, later, protector of Mexico, at the end of the 19th century.
According to Venezuela’s Mission Verdad, a story published by Orlando Avendaño in the reactionary PanAm Post affirms that “the figure of interim president adopted by Juan Guaidó arose in a meeting at the headquarters of the Organization of American States (OAS).” According to Avendaño, in that December 14 meeting, OAS Secretary General Luis Almagro, Julio Borges, Leopoldo Lopez, Maria Corina Machado, and Antonio Ledezma stated that the anti-Chavez opposition’s best move would be to promote a “transitional government”.

RELATED CONTENT: US Anti-War Activists Oppose Guaido’s Seizure of Venezuelan Diplomatic Offices
A TRANSITION TO DEATH
When the farce that led to the attack on Libya, and the assassination of Muammar Gaddafi, was put into action, a university professor, unknown in academic circles, began to announce on social media that a “chaotic” situation was developing in his country, and when the media war was at its height, the professor, now in front of corporate broadcasters’ television cameras, dramatically appealed for a NATO intervention in Libya. He died, just days later, at the hands of Gaddafi’s forces, a “victim of the dictator’s repression.”
Attempts were made to create a similar scenario in Cuba, in 2006, when a little known counterrevolutionary organized a “popular uprising” on August 13 in
Centro Habana. Many who knew of the plan suspected that the alleged activist would die in the “uprising,” given the language being used in U.S. media, especially in Miami. He was described on U.S. television as a human rights activist who was willing to “immolate himself for democracy.”
With clear intentionality, Fidel’s birthday was chosen for the provocation – the true nature of the action. Organizers, functionaries at the U.S. Interests Section In Havana, and CIA agents knew very well there would be no “popular uprising,” but that a vicious campaign would be unleashed on social media and in the corporate press to create the impression that Cuba was in a state of ungovernability and chaos, given the Comandante en Jefe Fidel Castro’s illness and the naming of Army General Raúl Castro to lead the government. When this fabricated perception was well disseminated and possibly the death of an activist at the hands of “security forces,” a Cuban university professor/ CIA agent would request help from the U.S. government, assistance that would be provided via a military intervention. This man, trained by the CIA, a leader manufactured by them, would be the self-proclaimed “transition President.”
When the “self-proclaimed” leader asked the question, as Guaidó pointedly did, from the United States, who would guarantee his safety, they replied with cold logic, “The best thing that could happen would be that they try something against you.”
The manufacturing of Latin American leaders went to work in overdrive, well before the so-called transition to democracy began to put an end to dictatorships on the continent. The U.S. needed leaders of a new type to protect transnational corporations, sources of raw materials, and strategic locations in its “back yard.”
By the end of the 1980s, the real possibility that authentic popular movements could triumph was more than a forecast studied by U.S. intelligence services and labs. A new progressive wave could sweep aside imperialist interests, since the dictatorships could no longer play the role of containment walls. A new variant was needed.
U.S. trained leaders would play an essential role in maintaining Yankee domination throughout the region. Academic exchange programs, scholarships, leadership courses, ensured that the majority of those who occupied important positions in society, the economy, and politics south of the Rio Bavo would defend U.S. interests.
THE GUAIDÓ PLAN
February 22, in violation of a court order prohibiting his leaving the country without permission, Guaidó arrived in Cúcuta, Colombia, to attend a concert there, the prelude to an intended violation of Venezuelan national sovereignty set to take place February 23. Since then, he has conducted a tour of Latin America, during which he said he would return to Venezuela, and has done so.
The “self-proclaimed President, Juan Gerardo Antonio Guaidó Márquez, knows that his status as a deputy affords him immunity, but not impunity. He now faces a criminal procedure for violating a clear, express court order, which he ignored. When a citizen fails to abide by a court order, the Public Ministry is expected to request that the court revoke the order – or it does so ex officio – usually imposing a more severe measure on the citizen who ignored a previous order.
Best to await the court decision and avoid creating a scenario without all the necessary information, since we can expect a just, well-substantiated ruling, in accordance with the law.
The Guaidó case has all the characteristics, all the components of the type of operation the CIA has mounted to overthrow governments not to its liking. It is no accident that Marco Rubio posted a photo on Twitter featuring the bloodied face of Gaddafi. Was this a threat or a slip?
Now, as part of the plot, sabotage left several regions of Venezuela without electricity, and within five minutes of the initial outage, Marco Rubio stepped up to the podium to talk about chaos and ungovernability in Venezuela, an effort promptly seconded by Mike Pompeo and Elliot Abrams.
JUST ONE STEP FROM TRAGEDY TO COMEDY AND VICEVERSA
The jokes were not long in coming. One Anacleto Panceto tweeted: “I, Anacleto Panceto, self-proclaim myself head of the Spanish state. Advise Rivera, Casado and Abascal to support me.” Débora followed the rhyme: “If I say I self-proclaim myself President of Argentina, who will follow me?”
Jaos Now proclaimed himself on Twitter “Archduke of the Austro-Hungarian Empire and all of Prussia,” adding that Trump was recognizing world leaders like crazy. Inna Afinogenova named herself Empress of Russia, while Luis Monta proclaimed himself the “interim President” of Ecuador, joining Colombian Alejandro Muñoz and Brazilian José de Abreu, who jokingly declared themselves President of their respective countries. Monta proposed a vaccination program for all newborns, boys, girls, and youth to ensure that the country was “free of traitors.”
This is the same script we witnessed in Libya, the same one they attempted in Cuba. Guaidó’s return is a provocation. The latest U.S. puppet will follow U.S. orders: Provoke Venezuelan authorities hoping to be imprisoned. His physical safety will be at stake, since “Venezuelan authorities, including the president of the National Constituent Assembly, Diosdado Cabello, have warned that Guaidó’s life is in danger as the messenger in service of his masters, who could sacrifice him, considering him more useful dead than alive.”