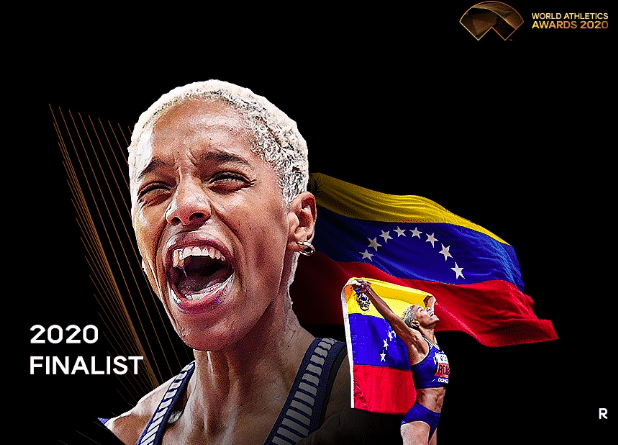 Venezuelan triple-jump athlete Yulimar Rojas continues to make history. Rojas is on the list of the five finalists for Female World Athlete of the Year, announced today by the World Athletics governing body.

The winner will be revealed next Saturday, December 5.

The Venezuelan hero was already on the list of ten finalists, but now she is one step closer to achieving this important recognition. In addition, Rojas now represents the only Latin American on the finalist list.

Joining Yulimar Rojas in this select Top Five are the Jamaican Elaine Thompson-Herah, the Dutch Sifan Hassan, the Kenyan Peres Jepchirchir, and the Ethiopian Letensebet Gidey.

Yulimar Rojas (@TeamRojas45) is one of five finalists for Female Athlete of the Year. pic.twitter.com/AE3bmUHMqD

In 2017 Venezuelan world champion triple-jumper Rojas won the Rising Star, a World Athletics award given to the best young athlete of the year.

So far only two Latin Americans have ever received the distinction of Female World Athlete of the Year: Cuban Ana Fidelia Quirot in 1989, and Colombian Catherine Ibargüen in 2018.

The Venezuelan has all the merits to take this award, since she remains undefeated in her category, and in 2020 she won in all her competitions. Despite the restrictions imposed by the COVID-19 pandemic she continued to demonstrate her competitiveness, talent, and strength.

Then, in the first event after the pause due to the pandemic, the Venezuelan won in Monaco with 14.27 meters in the open, achieving the best mark in the competition.