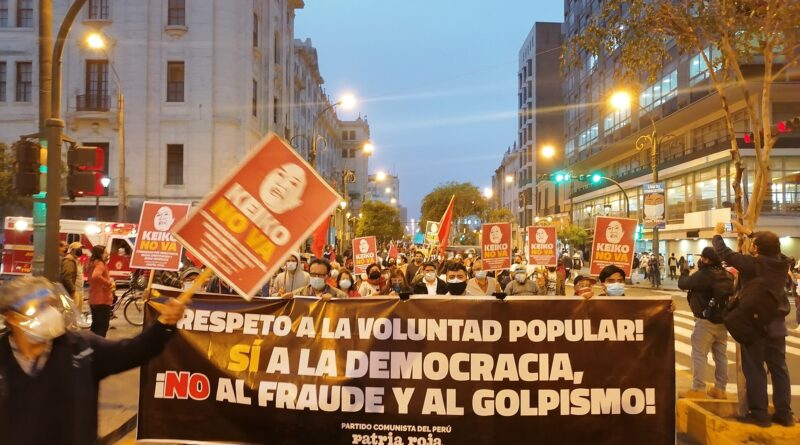 “The real situation is that Pedro Castillo has been elected,” said Garate. “What is happening is that the right-wing forces, Keiko Fujimori and the ultra, far-right, and fascist groups, don’t want to recognize the results. Right now, here in Perú, the right-wing forces are divided, because the US and the OAS are telling them ‘no, the Peruvian elections have been cleared, they were transparent.’”

Unlike in the recent cases of Bolivia and Venezuela, the OAS has not cooperated with the right-wing’s plan to cry fraud in Perú, evidence of a contradiction between imperialists and the local oligarchy regarding their tactical approach to achieving regional domination.

The OAS delegation to Perú, led by the former Foreign Minister of Paraguay, Rubén Ramírez Lezcano, confirmed that it had “not detected any serious irregularities” a few days after the June 6 election, and referred to the electoral process as “positive.” At the same time, the OAS has approved of the interminable delay that Perú’s National Election Jury (JNE) still maintains while Fujimori’s fraud claims are reviewed and the nation waits impatiently for an official announcement confirming Castillo’s presidency.

RELATED CONTENT: ‘Stop the Steal’ Campaign by Losing Candidate in Peru Must end

“The Mission has been able to verify that said procedures have been carried out in accordance with the law and regulations in force, and appreciates the fact that the Peruvian system guarantees due process,” wrote the OAS on June 24, almost three weeks after the election. “The Mission observed that the political parties in contention had equal opportunities to present their claims and to be heard, and found that the decisions of the collegiate electoral bodies are deliberative, expeditious and public. The Mission has observed that, up to this point, the actions of the jurisdictional bodies have adhered to current regulations.”

“The more liberal, moderate sectors are saying that they have to recognize the results,” said Garate. “But the far right, Fujimori and the far-right sectors and political forces are saying ‘no.’ They are talking about fraud, even calling for a coup d’état from the armed forces. So the new strategy, right now, because the coup d’état is almost impossible after the US and the OAS said the elections were free and transparent… is to make a judicial case that Perú Libre had corrupt financing. So what they’re trying to prepare is that, after they proclaim Pedro Castillo president, they are going to make a political impeachment.”

The comments were made during a panel entitled “Solidarity with Perú’s Struggle for Popular Democracy,” presented by the Alliance for Global Justice, which took place on June 6 and also featured Carla Toche, political scientist and activist with Nuevo Perú, and George Ygarza, journalist and PhD Candidate in Global Studies at UC Santa Barbara in the US.

Fujimori’s anti-communism places her in poor company
Ygarza compared the narrative constructed by Fujimori prior to the elections to that used by anti-Chavistas, liberals, and fascists, who shrewdly manipulate anti-communist narratives to attack any social movements that defy US hegemony. “She had some coded language, the same coded language that you see with other fascist nationalist movements around the globe,” Ygarza said of Keiko Fujimori. “Not necessarily saying ‘we’re against Indigenous people,’ but that ‘we’re against communists.’ This is a historical association with the campesinos and rural communities being more horizontal, and being more communal, and associating that with communism. One of her campaign slogans was ‘no to communism,’ implying that the other side was trying to push forth a particular form of communism—and we see this play out over and over again.”

Keiko Fujimori leaned heavily on the same anti-communist narratives employed during recent electoral campaigns in Ecuador and in Bolivia, in which liberal right-wing candidates pointed disparagingly to Venezuela and Cuba, suffering under illegal economic blockades, in a desperate attempt to use scare tactics on their nation’s voters. If we are to judge by recent electoral results, these threats did not seem to be particularly effective.

Right-wing influencers use “the bogeyman of Venezuela,” added Ygarza, “without understanding how the US sanctions have completely decimated Venezuela’s economy, to say nothing of what is happening in Colombia, of the butchery of Duque and what he is doing to Colombian people. So you see who Keiko is aligning herself with… She’s aligning herself with Leopoldo [López], with a lot of other fascists who are trying to undermine democracies across the region.”

Capitalism in decay
As Garate confirms, this ongoing assault on democratic processes, in an attempt to rescue the decaying neoliberal model, is losing ground in recent electoral outcomes in Bolivia, Perú, Chile, Mexico, or Venezuela. Although Arauz lost Ecuador’s recent presidential election, he received over 47% of the vote, a confirmation of socialism’s great appeal for voters.

“A few years ago the political scientists, academics, and some analysts, were telling us that the progressive cycle was over, that the left-wing governments in the region were falling, that we have new neoliberal right-wing governments, so there is no more Chavismo, no more 21st-century socialism,” noted Garate. “But as you can see, all of the region, from Mexico to Chile, Argentina, Brazil, the region is, I think, in dispute—and what you can see is that there is a struggle, a huge struggle between the role of imperialism and US influence in the region, and the struggle of social movements and progressive left-wing movement parties.”

These contradictions remind us of the conclusions of numerous Marxist theorists who maintain that fascism is a symptom of the inevitable decay of capitalism. “We view fascism as an expression of the decay and disintegration of the capitalist economy,” wrote Clara Zetkin in 1923, for example. “We can combat fascism only if we grasp that it rouses and sweeps along broad social masses who have lost the earlier security of their existence.”

Featured image: Communist Party of Perú-Patria Roja banner at recent demonstration. “Respect the popular will,” reads the banner. “‘Yes’ to democracy, ‘no’ to fraud and coups!” Source: www.facebook.com/partidocomunistadelperu.patriaroja