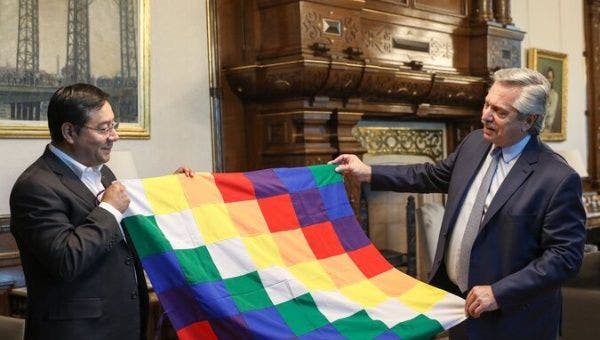 October 19, 2020.-  The MAS candidate’s election will put an end to the de facto government of Jeanine Áñez in Bolivia.

In a message published on Twitter, López Obrador praised this result and congratulated the Bolivian people for resolving the country’s conflicts peacefully and democratically. He also greeted the social organizations, native peoples, former president Evo Morales and the Movement Towards Socialism.

For his part, Ortega and Vice President Rosario Murillo extended their greetings to the representative of MAS.

“We congratulate each brother and sister of this noble and great people of Tupac Katari, the people of the first indigenous president of the Americas, our dear compañero Evo Morales.”

They add that “this new and unquestionable success of the Bolivian People, confirms the advance of its Plurinational Revolution, with the immense Force of the Spirit of our Ancestors and our Heroes.”

The leaders join the congratulations from several parts of the world to the winner of Bolivia’s elections this October 18.

Congratulations to #MAS, which has regained in the polls the power usurped by the oligarchy, in collusion with the #OAS and under the guidance of the empire. #Cuba joins in the celebration of #LuisArce's victory. The Bolivarian ideal is reborn. pic.twitter.com/0iqmnFUF1Y

Cuban President Miguel Díaz-Canel also congratulated today the Movement Towards Socialism (MAS) for the victory of its candidate Luis Arce in the first round of the presidential elections in Bolivia.

The president celebrated the results with a vast advantage for the candidate Luis Arce, who returned political power to MAS after the coup d’état against then-president Evo Morales in 2019.

“I contacted president-elect of Bolivia Luis Arce to congratulate him on his democratic triumph. We agreed to continue promoting strong bilateral relations between Paraguay and Bolivia and regional integration.”

“Congratulations to #MAS, who has recovered at the polls, the power that was usurped by the oligarchy, with the complicity of #OEA and the imperial guide. #Cuba shares joy for the triumph of #LuisArce. The Bolivarian ideal is reborn,” wrote the president.

The MAS candidate obtained 52.4 percent of the votes, while the candidate for Citizen Community, Carlos Mesa, reached 31.5 percent, according to the poll published by the pollster Ciesmori for Unitel.

The electoral law establishes that in order to win in the first round, one of the candidates must obtain 50 percent plus one of the votes, or at least 40 percent with an advantage of 10 percentage points over the second most voted for candidate.

Upon learning of the unofficial results, Arce thanked the Bolivian people for their support and trust and reiterated that they would work to regain stability and social peace.

We congratulate Bolivian President-elect Luis Arce and Vice President-elect David Choquehuanca, and commend the Bolivian people on their peaceful vote. We look forward to working with the newly elected government to promote economic prosperity, human rights, and press freedoms.

The former President Evo Morales, pointed out that Bolivia recovered democracy and qualified as a great responsibility to maintain the majority in Parliament.

The de facto government president, Jeanine Áñez, acknowledged the defeat and congratulated the winners on Twitter.

Featured image: Argentine President Alberto Fernandez: “The MAS victory in Bolivia is not only good news for those of us who defend democracy in Latin America; it is also an act of justice in the face of the aggression suffered by the Bolivian people.” | Photo: Twitter/@alferdez