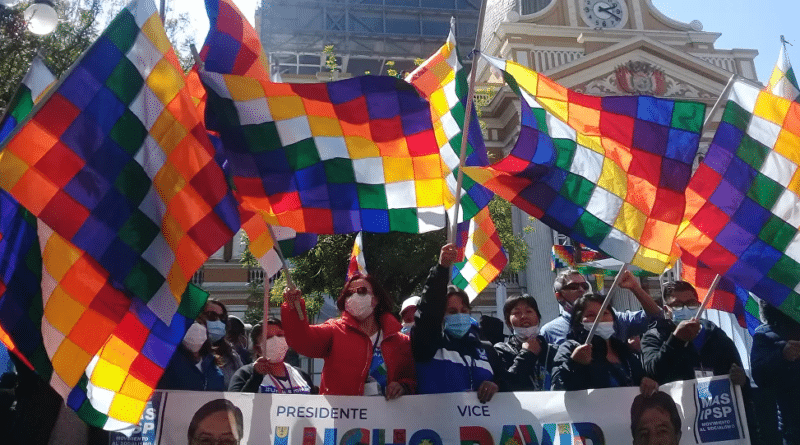 Since the end of the so-called ‘progressive wave’ in Latin America, which marked the first decade of this century, the regional left was relegated to being the opposition, but in the agitated atmosphere of 2020 it regained its hopes with new electoral victories.

In Chile, the proposal for constitutional reform promoted by leftist sectors was approved, while in Bolivia, the Movement Towards Socialism (MAS) of former president Evo Morales (2006-2019) returned to government.

Already in 2019, Peronism had returned to Argentina with the triumph of Alberto Fernandez, which awakened the first hopes among Latin American leftist sectors.

Progressive leaders such as former Uruguayan President José Mujica (2010-2015) or former Colombian President Ernesto Samper (1994-1998) were encouraged to predict, in interviews with Sputnik, the advent of a “new wave of progressive governments.”

Other politicians and analysts agree with them.

“A political change can take place in Latin America. We are facing an ideological shift in Argentina, Bolivia and Chile. In addition, we have countries with certain possibilities: Ecuador and Peru,” Marco Enríquez-Ominami, a former Chilean candidate for the presidency of the Progressive Party, who is also one of the founders of the Latin American political forum, the Puebla Group, told Sputnik.

For his part, Colombian sociologist Javier Calderon Castillo, a researcher at the University of Buenos Aires, told Sputnik that although progressivism was in retreat in Latin America, the dispute between the left and the right was never closed.

“2021 is the year for the left to continue advancing in Latin America. The candidacy of Andrés Arauz in Ecuador, the formula supported by former president Rafael Correa (2007-2017), is going to be very important. If it succeeds, it will begin to change the face of Latin America towards a new political stage of progressivism,” he said.

Castillo also pointed out that “we have to wait for the elections in Peru where the progressive sectors are growing, especially the candidacy of Veronika Mendoza, who has the possibility of winning.

On October 23 Mujica stated, in a dialogue with Sputnik, that progressivism has a good chance of winning the next elections in November 2021 in Chile, if it manages to unite.

“I think that the progressive forces in that country, if they find a margin of unity, may have the conditions to win the elections. The problem will depend on the possibility of unification.”

For his part, on October 19, Samper said to Sputnik that the result of the elections in Bolivia, with the victory of Luis Arce, of the MAS, is encouraging and marks the beginning of a new progressive wave.

“This is good news, not only for Bolivians, who will be able to continue with their democratic project but for the rest of the countries, which will find again the possibility of a democratic reaffirmation of progressivism.”

Calderón Castillo affirmed that in Latin America there is a “very strong” erosion of the neoliberal proposal, especially in Bolivia and Chile.

“Today the people are fighting against the consequences of neoliberalism.”

“There is a possibility of a return to the progressive sectors. That possibility is advancing, although surely it will not be as quickly as it was in the past decade. The neoliberal sectors are aware of their difficulties and are trying to prevent this from happening,” he added.

He speculated that in the Colombian elections of 2022 it is “possible” that some progressive sector will win; however, he warned that Brazil remains pending.

“The South American giant is a country that can definitely change the correlation of Latin American forces and for now it is in the hands of the ultra-right. Then there will be advances, but not complete ones. The struggle is still going on. For now, it is being settled in favor of the progressive sectors, but there is still much ahead,” he said.

For his part, Enríquez-Ominami said that the left must recover as many governments as possible for a “new continental integration.”

“It is evident that commercial integration, the economy of value, the moratorium on debt, military spending, and the relationship with the US will be re-signified because the left will bet on social justice more than on economic efficiency,” he added.

He maintained that the increase in possibilities for the left is due to the fact that right-wing or liberal governments did not fulfill their promises of prosperity in Argentina, Bolivia, Chile, and Ecuador.

“In addition, Latin American progressivism learned the lesson that it has to change the institutionality, fight for social justice and attend to the demands of the middle classes,” he said.