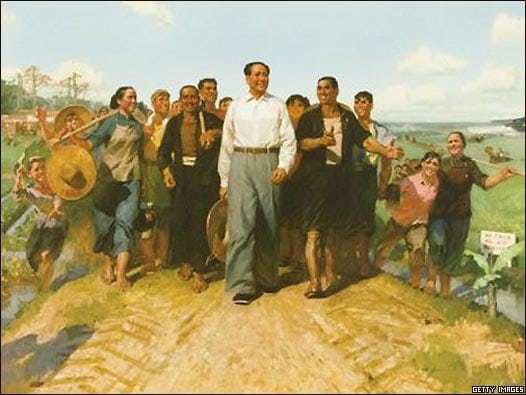 Professor of political science at Venezuela’s Bolivarian University, Chris Gilbert is creator and co-host of Escuela de Cuadros, a Marxist educational program broadcast in Venezuelan public television and a participant in the Barcelona-based project Seminari Taifa. Gilbert’s articles have appeared in Rebelión, LaHaine, Monthly Review, and CounterPunch, and he has coauthored the recently-published book Venezuela, the Present as Struggle (Monthly Review Press, 2020).

The Chinese revolutionary experience in general, and Mao Zedong’s thought in particular, had a global impact. What can you tell us about its influence in Venezuela?

Well, the first thing to say is that in Venezuela, Maoism did not play an important role in any direct sense. That is a question of timing and geography. In the first place, the Cuban Revolution’s influence was so important in the whole region that it tended to eclipse everything else. Then, when Maoism became a fashion, capturing the imagination of many European leftists in the late 60s and after, it did influence people in the Venezuelan left, but by then the revolutionary struggle was already beginning to subside.

That, of course, didn’t keep some Venezuelan revolutionaries from having Maoism as some kind of theoretical reference, and it’s important to point out that Che Guevara, who was obviously very influential throughout Latin America, sympathized with many Maoist ideas.

So would you say that, if there is a common ground between Maoism and Chavismo, it is more a question of parallel evolution?

Certainly, and one of the most fascinating parallels comes by way of Simón Bolívar [Venezuela’s key independence leader, 1783-1830] and his attitude toward the army. Bolívar, like Mao, believed his revolutionary army to be an important democratic and popular force. When people criticized Bolívar for relying on his army in politics – attacking him from a liberal position – Bolívar responded: the army is the people who can actually do things. Bolívar’s phrase could also be translated: the army is the people with power. For Bolívar, the revolutionary army was part of the people (think: “The people are like water and the army like fish”), and it was a democratizing force. That was true at the time and, as it turns out, the relationship between army and people became one of the key factors in the revolution that happened in Venezuela two centuries later.

RELATED CONTENT: The Commune is a Historical Imperative: A Conversation With José “Yoda” Solórzano

That brings us to Hugo Chávez and the Bolivarian Process. What can you tell us about Chávez, his Chinese allies, and Mao Zedong?

There are interesting anecdotes about Chávez and Mao. Chávez established close relations with China, which he called a “strategic ally.” As everybody who observed him knew, Chávez was a politically and socially skilled person. He used to make the Chinese leaders uncomfortable, because he would bring up Mao when he was with them, quoting from the Little Red Book. He treated Mao just as he treated Bolívar, that is, as someone who is alive and among us. But that wasn’t what the Chinese leadership wanted to hear. They preferred Mao as something more distant and static – more like an icon – because of course most of them were capitalist-roaders. I think Chávez, who was socially very sophisticated, liked to make them uncomfortable. He knew what he was doing!

But beyond the anecdotes, was there a substantial relation between the practice and theory of Chavismo, on the one hand, and those of Maoism, on the other?

There was a very important relation between Chávez’s conception of the transition to socialism and some key Maoist ideas. When Chávez decided that the commune was the path to socialism, he started to promote the reading of Inside a People’s Commune: Report from Chiliying, the book by Chu Li and Tien Chieh-yun.

In fact, in his last substantial discourse, the so-called “Strike at the Helm” [2012], Chávez criticized his ministers for not having read the book, which he had published as a pamphlet and from which he read sections on national television. Chávez thought that the experience of Chinese communes – which was an important Maoist legacy initiated in the Great Leap Forward – held many important lessons for Venezuelan communes. In fact, he saw the latter as the basic building blocks of socialism in Venezuela.

In his “Strike at the Helm” discourse, Chávez actually behaved a bit like Mao. When he attacked the ministers and criticized them publicly, that was like Mao saying at the beginning of the Great Cultural Revolution that the party’s headquarters should be bombarded!

Exactly! And that brings us to the most important if somewhat abstruse relation between Chavismo and Maoism – it comes by way of the Great Cultural Revolution, but not directly (and that is why it is a bit abstruse). The truth is that there is an extraordinary parallel between the ideas of István Mészáros, who was the most important Marxist thinker for Chávez, and Mao’s project in the Cultural Revolution, although as far as I know, Mészáros didn’t have much to say about that aspect of the Chinese revolutionary experience.

Yes, precisely that, and it is an important point. The coincidence between Mészáros’s thought and the project of the Cultural Revolution [1966-1976], shows how the key ideas of socialism are part of a universal legacy because they respond to the same problems and challenges (namely, the problems of overcoming capitalism, which is a world system). Mao and Mészáros faced the same problems of real socialism at roughly the same time. The central problem was the persistence of the logic of capital – what Maoists called bourgeois practices and capitalist tendencies (in spite of the fact that the bourgeoisie had been defeated and removed in China).

Just as Maoists sought, during the Cultural Revolution, to root out these bourgeois practices that persisted in the bureaucracy, party, and management in China, so Mészáros argued in his book Beyond Capital [1995] that even though a society might no longer be capitalist, it might be governed by the logic of capital.The latter – the logic of capital – is metabolic and it permeates every space in society.

In its place, one would have to construct substantive democracy, which would eradicate or abolish the hierarchical logic of capital (with its insidious division of labor). That is exactly the project of the Cultural Revolution and it’s what Chávez, following Mészáros, wanted to do in Venezuela using the commune.

Listen to this quote from the great French Maoist Charles Bettelheim: “The Soviet experience confirms that what is hardest is not the overthrow of the former dominant classes: the hardest task is, first, to destroy the former social relations – upon which a system of exploitation similar to the one supposed to have been overthrown for good can be reconstituted – and then to prevent these relations from being reconstituted on the basis of those elements of the old that still remain present for a long time in the new social formation.”

Bettelheim wrote this in 1974, but it’s precisely the sort of problem that Mészáros addressed in his work from the 1990s, which would inspire Chávez so profoundly.

This is all very interesting, but the communes are rather embattled in Venezuela today. They often find themselves in contradiction with the government…

Well, it seems that history repeats itself! Yes, the capitalist-roaders have gotten the upper hand in Venezuela just as they did in China. That, however, doesn’t keep Chávez’s defense of the commune (he said: Commune or Nothing!) and the key ideas of the Cultural Revolution from being a shining example. And also a practical one. That is, they are not merely utopian ideas, but rather the only way to construct socialism. For only by eradicating the logic of capital in all spaces – especially but not only in the spaces of production – can we achieve socialism. On the contrary, it is the other proposals – stagism, for example – that amount to building castles in the air!

Anything else about Chavismo and Maoism?

Yes, both legacies have suffered a similar fate. Of course, the left around the globe is in a bad state generally and has failed to reflect on its most important inheritances. But in the case of Chavismo and Maoism, there is a further problem, which is Eurocentrism. Eurocentrism is the enemy of revolutionary science, because it leads people to overlook the universal contributions that quite often emerge in the periphery of the world system. It is important to recognize that Europe (and the Global North in general) hasn’t always been that way… or it would still be doing mathematics without the zero!

But the development of revolutionary thought has often been hurt by its inability to incorporate key ideas that come from outside the center. Such is the case with Mao’s stress on the continuation of class struggle following the revolution, the Maoist emphasis on political participation of the masses, and the way of dealing with contradictions in the movement. In the case of Chavismo, as far as its universal contributions are concerned, I would point to the dialectical relation between state and popular power, but above all the emphasis on substantive democracy as the cornerstone of socialism.

Cira Pascual Marquina is a teacher and political organizer in Caracas, and a writer for for Venezuelanalysis.com.