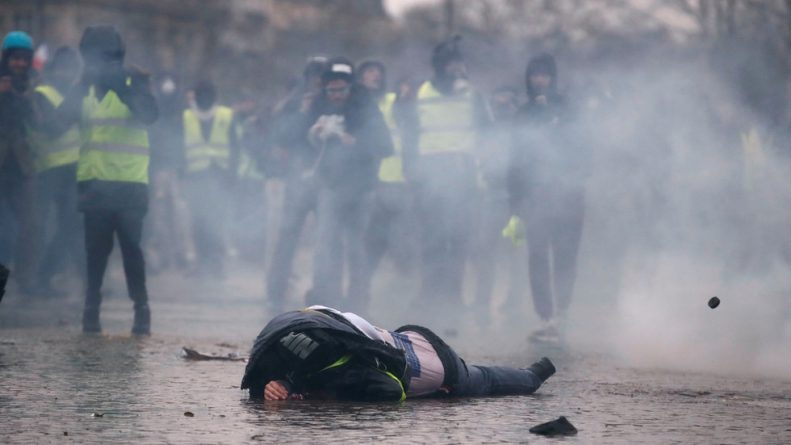 One of France’s foremost public intellectuals has posted a 4,000-word screed exposing collusion between “the brute” Emmanuel Macron and the mainstream media to put down the Gilets Jaunes, all while blaming them for the violence.
“Emmanuel Macron has chosen not to maintain order, but to suppress public protest,” writes Michel Onfray in his blog, in an attempt at a definitive account of the protests that have gripped France since November.

“Intentionally, the president did not restrain the violence of protesters, and unleashed it on the part of the authorities. As the head of state, he carries responsibility for choosing repressive measures, so every single injury sustained is on him”.

A household name in France, Onfray is the author of over 100 books on subjects ranging from philosophy to religion to politics, many of them non-fiction bestsellers. He is also the founder of a tuition-free private university in Caen, which is part-funded by his publications. He is one of the most respected figures to try to give an overview of the crisis that goes beyond headlines and political allegiances.

Onfray writes that the protest did not begin as a “peasants’ revolt of disgruntled right-wingers” refusing to pay an environmental fuel tax – as it is being portrayed by newspapers – but was simply a result of ordinary Frenchmen saying, “We cannot pay!”

Instead of listening, however, Macron decided to escalate the conflict “using it for his own benefits, and the interests of the Maastricht camp [the pro-EU establishment].”

‘Symbolic slaps’
The philosopher, who has previously aligned with leftist movements, details six “symbolic slaps” the president dealt out to the protesters, in addition to the physical violence they suffered in their weekly clashes during the demonstrations.

These include accusations that the protesting crowd consists of homophobes, racists and anti-Semites, insinuations that “not all French people know how to work hard,” and that some of the low-paid workers “take it easy.” More substantively, there was the promise of the grand debate, while suggesting that no major changes of course would take place (“Reform is not a free bar!” Macron has warned) and a temporary moratorium on the fuel tax, rather than an outright promise to shelve it.

At each step of the way, he has been supported by the “establishment media,” regardless of its nominal political affiliations.

“The Yellow Vests are being presented as bestial, and the media skillfully uses all images and words to support those theses, replicating the descriptions used by the president’s palace,” writes Onfray.

‘Mosaic of despotism’
Onfray sees the roots of the problem in the “liberal Maastricht state” created in 1992 with the establishment of the European Union, “to promoting which Macron has dedicated his entire short adult life.”

“This is an order that is strong against the week, as we can see on the streets, and weak against the strong, as is evident from the abolition of the wealth tax and the failure to root out tax havens,” writes the 60-year-old Onfray.

The Maastricht state is “cruel to those who carry the burdens of globalization” and “simply by declaring their poverty, these people have been ideologically criminalized.”

What is happening now is the emerging “mosaic of despotism” as the ruling classes try to hold on to the advantages they have accrued over the past decades.

“When the rich call the poor names, it is a variation of old themes, that the working classes are dangerous classes. This is the song all bourgeois establishments sing when they are scared,” writes Onfray.

Featured Image: A person injured by a water cannon lies on the street during a demonstration by the “yellow vests” movement near the Arc de Triomphe in Paris. © REUTERS/Christian Hartmann