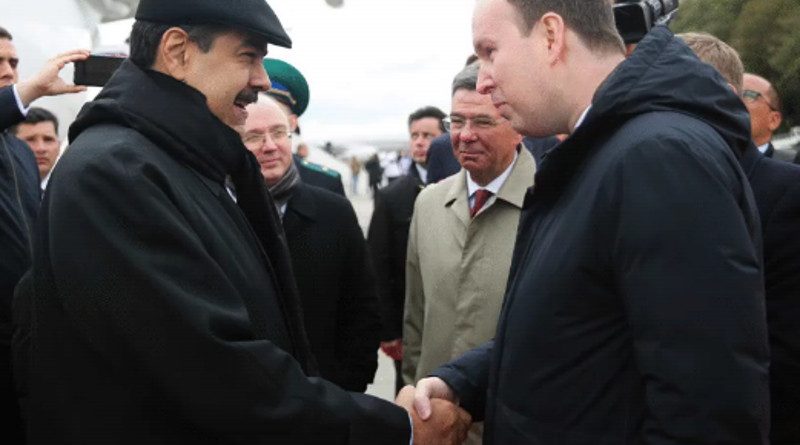 The president, Nicolás Maduro, is in Moscow to strengthen cooperation with Russia based on mutual respect, and to discuss issues of international geopolitics such as interference in the internal affairs of Venezuela.

Upon arriving in Moscow, Maduro posted on his Twitter account that the visit would aim to strengthen “our historic and very positive relations of exchange and respect among our peoples.”

On Monday night, the head of state announced his departure to Russia to
review with Putin “the whole map of cooperation” and announced that he will also meet with businessmen of the Eurasian giant to seek “new paths” to boost mutual cooperation “on all levels.”

For his part, the Kremlin spokesman, Dmitri Peskov, explained on Tuesday that among the “variety of aspects” that will be discussed, the issue of the interference of some countries in the affairs of Latin America by third States has been scheduled.

RELATED CONTENT: US Looking to Sabotage 2020 Parliamentary Vote in Venezuela – President Maduro
“(Maduro and Putin) will exchange views on regional issues, especially Ibero-American issues, on the issue of direct interference in Ibero-American affairs by third States,” Peskov said, detailing that document signing is not planned during this visit.

This is Maduro’s first international trip of 2019, and he returns to Russia after nine months since his last visit, when he signed investment agreements in the area of oil and mining for more than 5 billion dollars. Maduro’s last visit to Russia was in December 2018. On that occasion, Caracas and Moscow signed contracts for more than 5 billion dollars in the oil and mining field.

“It has been a working session of two days, intense, of work (…). We are guaranteeing an oil investment of more than 5,000 million dollars” and “contracts over 1,000 million dollars” for the exploitation of gold, the president told the VTV State channel on that occasion.

Russian investment in the country, according to Maduro, would focus on “mixed companies”, to raise the country’s production by “almost one million barrels.”

In addition, during this visit the importation of 600 thousand tons of wheat was also agreed upon and agreements were signed for the repair and maintenance of the Russian weapons and military equipment park of the Bolivarian National Armed Forces (FANB).

“We have found the point to move forward from with a complete and comprehensive economic program that can be perfectly integrated into the economic vision of Russia-Venezuela cooperation,” Maduro said on that occasion.

Maduro’s visit comes the day marking the beginning of the 74th session of the United Nations, which he has already said he will not attend, but instead of him a delegation headed by Vice President Delcy Rodriguez will participate, a few hours after 16 foreign ministers of the TIAR will approve, upon request of the opposition, a package of sanctions against the country.