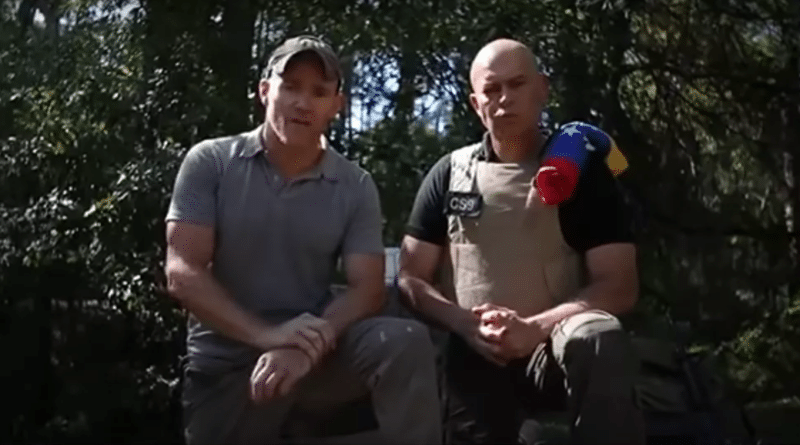 In May 2020, a group of mercenaries attempted to land in Venezuela by sea, kidnap the country’s president, and take him to the US to face prosecution on trumped-up drug charges. The brazen scheme collapsed, eight mercenaries were killed, and seven dozen more, including two US nationals, were captured and sentenced to decades of jail time.

Jordan Goudreau, the mastermind behind the failed 3-4 May plot to kidnap Venezuelan President Nicolas Maduro, has accused the US government of trying to kill him, and compared himself with WikiLeaks founder Julian Assange and former NSA contractor-turned-whistleblower Edward Snowden.

Speaking to Rolling Stone in an extensive interview published on Sunday, Goudreau, chief executive of the Florida-based private security firm Silvercorp, revealed that the FBI carried out a raid on his Florida home on 21 May, and claimed that the Feds planned to kill him.

“I took my shirt off. And they had no reason to death-by-cop me. But they knew my background. They knew I had a gun,” he said.

Goudreau says he remains under investigation by the Justice Department, although no indictments have been filed, and fears that they could easily put him away for a long time, just as they’ve tried to do with Assange and Snowden.

“If the DoJ wants to go after me, they can indict me because I jaywalked and then put me in prison for 20 f***ing years. It’s rare in this world to have guys like Julian Assange, and it’s rare to have guys like Edward Snowden actually see something that’s f***ed up, say, ‘You know what, that’s f***ed up, I’m going to try to fix it.’ You know why it’s rare? It’s because these governments come together and they just destroy them,” the former special forces soldier-turned-mercenary said.

Goudreau also dismissed claims by the Venezuelan opposition leaders and the Trump administration that they had nothing to do with the botched May raid known as Operation Gideon, suggesting that they would take credit instantly if everything had gone as planned.

Goudreau is said to have given the Rolling Stone interview after spending six months off the grid. Last month, he filed a $1.4 million breach-of-contract lawsuit in a Miami court against the Venezuelan opposition adviser and financier Juan Jose Rendon. Rendon claimed in May that the Venezuelan opposition cut ties with Goudreau after he allegedly failed to deliver on his promise of finance and personnel to the operation. Goudreau has accused the opposition of scrimping on a $213 million ‘general services’ contract with Silvercorp, which he says forced the would-be mercenaries under his leadership to collect donations from Venezuelan migrants living in Colombia to finance their plot.

In his lawsuit, Goudreau also revealed that Erik Prince, founder of the Blackwater private military firm, offered a competing bid to overthrow Venezuela’s elected government. A lawyer for Prince said this claim was untrue. Goudreau has also alleged that he made direct contact with the Trump administration by meeting with Drew Horn, an assistant to Vice-President Mike Pence. A spokesman for Pence later dismissed the latter claims, saying Pence had no prior knowledge of the raid and did not know Horn.

Goudreau took responsibility for the botched Venezuela raid in a video address in its immediate aftermath.

In August, a Venezuelan court handed down 20 year prison sentences to Luke Denman and Airan Berry, the pair of US mercenaries involved in the May raid, for the crimes of conspiracy, association, illicit trafficking of weapons of war and terrorism.

Eight mercenaries were killed in the raid and 17 Venezuelan nationals were convicted of involvement in the plot.

Ilya Tsukanov is a Moscow-based correspondent specializing in Eastern European, US and Middle Eastern politics, Cold War history, energy security and military affairs. Member of the Sputnik team since the site’s inception in 2014. Master’s degree from Queen’s University in Kingston, Canada. – “Source” –