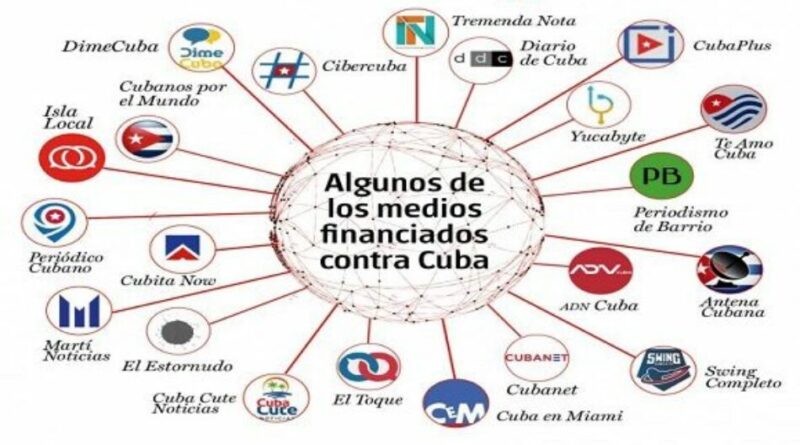 They are classified as independent or alternative. But it is enough to go after the route of money that encourages and articulates them to know on whom they depend and to which editorial line they respond…

A media network is trying to legitimize the US hegemonic vision of democracy and freedom in Cuba. With their annexationist strategy, they constantly intoxicate the social networks with distorted information about almost everything that happens on the island.

They call themselves “independent or alternative”, but it is curious that all those who run CiberCuba, ADN Cuba, Cubanos por el Mundo, Cubita Now, Cubanet, Periodismo de Barrio, El Toque, El Estornudo and YucaByte, among others, live abroad, mostly in the United States, and their communication strategies are the formula for the political design that prevails in that country.

Maykel González, from the subversive site Tremenda Nota, publicly stated that, during his stay in the U.S., specifically in the state of Ohio, he attended an academic program with professors from the University.
“There was a contact with officials in charge of attending the press at the State Department, I had a private appointment with State official Priscila Hernandez,” Gonzalez said.

The June 2004 report of the Commission for Assistance to a Free Cuba records the main subversive lines against the Greater Antilles, including the promotion of press projects. Since then, all the administrations after President George W. Bush adjusted their media design to each context.

The State Department, the U.S. Agency for International Development (USAID) and the National Endowment for Democracy (NED) of that nation, finance this media machinery that has benefited from the more than $500 million that the White House has allocated in the last 20 years for subversion in Cuba.

In order to receive the funding expeditiously, several of these counterrevolutionary digital publications have been registered in other countries as non-governmental organizations (NGOs).

Such is the case of the sites El Toque, through the collective Más, based in Poland, and El Estornudo, created in Cuba, and later legalized in Mexico as an NGO.

Carlos Manuel Álvarez, director of El Estornudo, arrived in Cuba on November 24 to join the San Isidro media show.
Abraham Jiménez Enoa, who was a participant in that same website, expressed that he does not know how much the total financing of the “media” is, because everything is done from the outside. “The collaborators that make the magazine charge for work, with a fixed salary of 400 CUC. Until I left, El Estornudo was financed by the NED and Open Society,” said Jiménez Enoa.

These so-called alternative and independent media disqualify themselves when it is revealed where their livelihood comes from, even though sometimes they try to divert attention from the origin of the money.
The researcher of the Center for Hemispheric and U.S. Studies, Yazmín Vázquez Ortiz, explained that financing, training and technical assistance are pillars, from which the conditions that exist in the societies that can be the object of intervention are taken advantage of, to promote resistance movements that can foster the change that the U.S. wants.

Those who lead and collaborate in these spaces do so through organizations based in U.S., European or Latin American territory.

The deputy director of this same Center, Olga Rosa González Martín, pointed out that since they operate as a private organization, they receive private funds, which can come from any individual, from any corporation at the international level, making it more difficult to link an entity with a specific government, and with its foreign policy objectives in a given country.

José Jasán, from the subversive site El Toque, stated that “the most acceptable thing for ‘the company’ is that by going to train a group of Cubans, it gives them the opportunity to pay them directly.

Elaine Díaz Rodríguez, from Periodismo de Barrio, said that they went to international cooperation. “At first, it was financed with the savings I was able to take to Cuba from the Lima Scholarship, and later we were able to carry out a pilot project with the Swedish Foundation for Human Rights. We achieved an alliance with the Norwegian Embassy, through which we are here,” she said.

In this design, the Cuban-American Aimel Ríos Wong stands out from NED. As Head of the Cuba Program, he distributes the funds approved to dismantle ideological and cultural paradigms from outside and inside the Island.
Maykel González, from the subversive site Tremenda Nota, commented that Ríos Wong called him, went out to “take a walk in Washington”, and recognized him as someone who has made himself present, who has been in constant dialogue with the actors, both from journalism and from civil society.

“We are working with about $7,000 for a quarter, from which we do the planning of the work, and it is allocated by all the fees we have to pay,” said Maykel Gonzalez.

As a strategy, they select their future leaders, train them, reward them, finance them, stimulate them, make them visible, bring them together, empower them, guide them, and give them spaces and stands.

“What they say is: no, but nobody tells me what I have to write, nobody tells me what the editorial line of my page is or of the articles I write. They don’t have to tell you, you already have that line assumed, you get funding, because you already said those things, and you know that if you don’t say them and don’t follow that anti-government line you’re not going to receive the funding,” noted Javier Gómez Sánchez, a specialist in audiovisual media.

As the computerization of the country has advanced, said Gómez Sánchez, people have been having greater access to the Internet, and this war has been increasing and organizing, because their possibility of reaching certain sectors of the population with this type of media manipulation has increased.

Dr. Ernesto Estévez, member of the Cuban Academy of Sciences, reminded that this phenomenon is something that has been working for many years, with the aim of reversing the Cuban Revolution, of making a capitalist restoration.

Public sources of the US government itself show the increase of these funds during the last years, just when the Cuban State is advancing in the transformations of the new economic and social model.

This is confirmed by a call from the US Department of State’s Bureau of Democracy, Human Rights and Labor to fund proposals related to civil and political rights in Cuba, amidst the provocations put forth in recent days.

Together with the imposition of restrictive economic measures and the complex epidemiological scenario of COVID-19, the enemy media lined up to discredit the Cuban government’s management and delegitimize the social system.

“It has to do with the fabrication of opinion matrixes, which have two essential characteristics: first, they are created to manage the discontents that exist, related to certain issues, and to direct them against the government, socialism, and the political system; and second, to try to promote in Cuba a liberal thought, based on liberalism, which is the ideology of capitalism,” exposed the psychologist Karima Oliva Bello.

In the communicational framework, there are the so-called influencers with hypercritical tendencies, created to generate empathy and ideological tendencies in thousands of followers, through social networks.

The enemy press projects, in this scenario, are identified as instruments of the US Government in its unconventional war strategy against Cuba.

Whoever consumes the news published by the subversive media could come to believe that Cuba is a country that is collapsing. However, this is a nation that is living a different reality.

Translated and edited by Walter Lippmann for CubaNews.