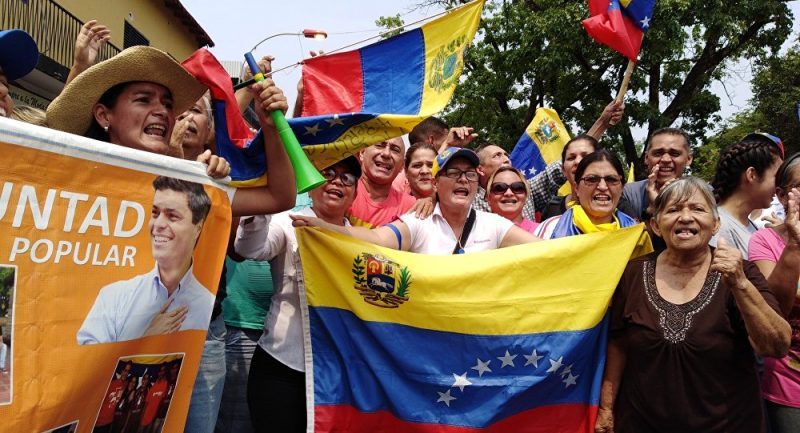 International News
May 1, 2019May 1, 2019 orinocotribune fake news, Maria Zakharova, Pompeo, Russia, Trump not knowing what to do, US Imperialism

On Tuesday, opposition leader Juan Guaido attempted to initiate the “final phase” of so-called “Operation Freedom” in a bid to seize power in the Latin American country, with forces loyal to President Nicolas Maduro successfully resisting the coup plotters after violent clashes in Caracas.

“Washington tried its best to demoralize the Venezuelan army and now used fakes as part of an information war,” Zakharova said.

Earlier, Pompeo claimed that Maduro had planned to flee his home coutnry for Cuba before being talked out of it by “the Russians.”

“We’ve watched throughout the day, it’s been a long time since anyone’s seen Maduro,” Pompeo said. “He had an airplane on the tarmac, he was ready to leave this morning as we understand it and the Russians indicated he should stay,” he added. “He was headed for Havana,” the secretary of state clarified.

Making up fake news is a very sad way to accept that the coup you backed has failed… once again. Diplomacy has to be restored in the US Government. #TrumpHandsOffVenezuela https://t.co/tqMdfoURjo

On Tuesday, Maduro appeared on Venezuelan state television, telling his countrymen and women that he had appointed prosecutors to investigate an attempted coup in his country following unrest earlier in the day which left at least 69 people injured amid clashes between demonstrators and security forces in the capital.

Earlier on Tuesday, Venezuelan opposition leader Juan Guaido and his supporters gathered in Caracas in front of the La Carlota military base, announcing that the “Operation Freedom” campaign to oust the current government had started its “final phase,” and called on the military to join protests against Maduro.

The long-running political crisis in Venezuela escalated in January after Guaido, a member of the semi-defunct National Assembly legislature, proclaimed himself interim president pending new elections, just weeks after Maduro’s inauguration for a second term. The coup plot received immediate support from the US and its Latin American and European allies, as well as Canada, while Russia, China, and dozens of other countries voiced support for the elected government or urged non-interference in Venezuela’s internal affairs.