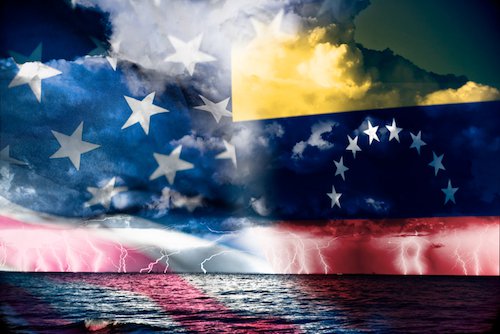 The US has full escalation dominance in the Hybrid War on Venezuela, so while it would be internationally illegal and morally wrong, neither Caracas nor its partners in Moscow, Beijing, and Tehran would do anything of substance to stop Washington if it takes the fateful decision to blockade the Bolivarian Republic.

Trump raised eyebrows last week when he answered in the affirmative after being asked whether he’s considering a “blockade” or “quarantine” of Venezuela in response to the support that Russia, China, and Iran are providing to the Bolivarian Republic. It’s clear that this policy option is only being pondered because the US’ earlier Hybrid War plots failed to dislodge the democratically elected and legitimate government of President Maduro, with the authorities proving themselves more than capable of foiling both military coups and Color Revolutions. The US is loath to acknowledge that its strategic defeat was at Venezuela’s hands alone, which is why it’s tried to blame its three aforementioned multipolar rivals instead, with the infowar narrative being that the socialist government would have fallen had it not been for their crucial support.

Interestingly, it’s not just the Mainstream Media that’s fallen for this storyline, but many in the Alt-Media Community too, albeit for different reasons. While the former’s motivations are obvious enough in the sense that they want to portray those three countries as global bogeymen, the latter are under the “wishful thinking” spell that they’re actually “global saviors” who are responsible for saving the world from American aggression. Instead of giving credit where it’s due and applauding the Venezuelan Armed Forces and the vast majority of the population who support them, they’d rather attribute everything to Russia, China, and Iran, especially after Moscow’s highly publicized and grossly decontextualized short-term dispatch of military advisors to the country earlier this year.

Why Would the US Want Venezuela’s Oil When It Already Buys 41% of Its Total Exports?
Russia consistently maintained that this was a preplanned deployment intended to train its counterparts in using various weapons systems that they agreed long in advance to export to Venezuela, but the Mainstream Media portrayed this as a secret military intervention. Alt-Media, for its part, believed that Moscow was “winking” at them through this move and didn’t take its vehement explanations seriously, instead imagining that the Mainstream Media might actually have been right for once and that a second Syrian-like operation was really in the making. When the US’ regime change plans came to naught, they immediately thanked Russia for its role in this outcome, even though Moscow literally had nothing to do with it at all. After accomplishing their training mission, Russia’s military advisors left the country earlier this summer, as if nothing ever happened.

Nevertheless, the US is still smarting from this strategic defeat and decided to partially blame it on Russia in order to “save face”, seeing as how recognizing the reality that this was purely a Venezuelan victory would be much too embarrassing for the Trump Administration. As such, it makes sense why the President is seriously considering blocking the South American country because he knows that this dramatic move might be enough to tilt the Hybrid War odds in his country’s favor and finally trigger the military coup and/or Color Revolution that it needs in order to overthrow the government there. It would be internationally illegal and morally wrong, but the fact of the matter is the the US wields escalation dominance over the situation, so it could very well go ahead with this dire scenario if it has the political will to accept the uncertain consequences.

RELATED CONTENT: Chancellor Arreaza Rejects Savagery Used by the US in its Threat of Naval Blockade against Venezuela (Video)

Should it do so, then it’s improbable that Russia, China, or Iran would defy the blockade and trigger a 21st-century version of the Cuban Missile Crisis when neither of them did anything of tangible significance to help it during the earlier round of Hybrid War unrest when they much more easily could have. The fact of the matter is that geographic constraints make it impossible for them to sustain such an operation indefinitely as would be needed, to say nothing of the complete lack of interest in risking nuclear war just for the sake of their energy-rich but debt-laden partner, though the “wishful thinking” narrative that they would do remains pervasive in the Alt-Media Community. This is a narrative mistake of the highest magnitude, however, because it amounts to getting people’s hopes unrealistically high prior to their eventual crashing when reality inevitably sets in.

The disillusionment that would follow might be severe enough in many people to engender a radical reaction that leads to the reversal of their overall political outlook after having falsely believed that their “global saviors” would ride to Venezuela’s rescue, being unable to accept that those three are much too pragmatic to risk any direct losses of their own men just to please the Alt-Media masses. The ball is therefore entirely in the US’ court when it comes to the possibility of blockading Venezuela (most likely through a regional “coalition of the willing” if it ever comes to pass and with the authority to unleash a devastating response in case Caracas attacks their ships), but it’s unclear whether Trump’s hint is just scaremongering or something much more serious.