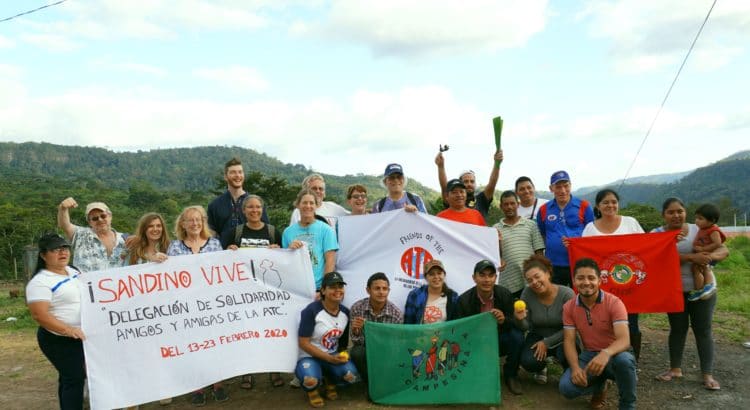 On day 7 of the Friends of the ATC “Sandino Vive!” delegation!, the internationalist brigade of North American Friends of the ATC, Via Campesina youth from Honduras and the Dominican Republic, and ATC affiliates reunited in Estelí, and began to make their way north to Somoto, Madriz. The group spent the afternoon visiting the Union of Agricultural Cooperatives of Nueva Segovia (UCANS) on the National Day of Cooperatives. This day was named in memory of the establishment of Sandino’s first cooperative in Wiwili and highlights the continued importance of cooperativism in this country, which has thousands of cooperatives across different sectors.

At UCANS, delegates were welcomed by Rafael Lovo, President of the Union of Agricultural Cooperatives of Nueva Segovia (UCANS). Rafael is one of the founders of the ATC in the region, and UCANS, a sister organization to the ATC, is a member of the ATC’s national federation of cooperatives, “FECAMPO”. UCANS is made up of about 30 agricultural cooperatives across the Nueva Segovia northern region of the country. As a union of cooperatives, UCANS works to support their members through promoting agroecology, increasing market opportunities, and promoting rural community tourism while protecting land, seed sovereignty, and gender and youth equity. Delegates entered a warehouse full of red beans, stored in large tin silos. These beans, each silo coming from a different UCANS cooperative, will be shipped to Venezuela as part of a Bolivarian-spirited solidarity project.

The delegation group, and UCANS team now made their way to a nearby cooperative, Nuevo Amanecer, in the community of San Antonio. The cooperative president, Orlando Gonzalez, presented on the cooperative’s growth and challenges through recent years. Positioned in the country’s dry zone, climate change has challenged farmers. Not only has the amount of rainfall been reduced, but it falls in extremely irregular patterns. In one evening as much as 600 mm of rainfall might fall at once, devastating crops. Water is a continual challenge for the community, which has four wells, with two of them contaminated by naturally occurring arsenic. To help them mitigate some of these issues, the community shared their “early warning system”, a chart allowing them to track harvests, rainfall, as well as social factors such as migration to Costa Rica, and the presence of dengue. Through cooperative organizing, UCANS is supporting the communities of the Nueva Segovia in maintaining their resilience through food and popular sovereignty.

On the next morning, the delegates headed south to Jinotega, where they were joined by staff from the ATC Jinotega office, and two additional recent IALA graduates. The group continued into the lush Jinotega countryside, stopping at an ATC affiliate cooperative called “Primero de Mayo” (May 1st) in La Union. After cooperative members proudly introduced themselves to the group, the delegates learned about the struggle for land endured by the community leading up to the Sandinista Agrarian Reform program. Once the land finally transferred from the hands of a few, large, exploitative landowners, “to those who work it”, upwards of 100 ATC cooperatives were established in the area.

To support this revolutionary process, the group discussed the many international brigades that arrived in the Jinotega region, specifically to aid in the coffee harvest, while increasing the international visibility of the cruel US-funded contra war. Once the Sandinista’s initially fell out of power in 1990, privatization under the Chamorro government occurred and many cooperatives were lost. During the ensuing 16 years of neoliberal governments, the ATC Jinotega worked to rebuild and maintain cooperative infrastructure, in part by alliance building with communities who were historically in opposition to the Sandinista front.

The delegation visited the coffee field of one cooperative member, who shared his experience of being affected by la roya or rust, a soil-borne fungus that devastates coffee plants and that has become more prominent in the region because of climate change.

As the delegation wrapped up their short visit to La Union, IALA graduates led a series of revolutionary chants, “La Tierra No Se Vende, Se Recupere y se Defiende!”, “The Land is Not For Sale, Recuperate and Defend it!”, and “Camina, Caminemos, Via Campesina, Somos las Semillas de America Latina!”, “Walk, Let’s Walk, The Peasant Way, We are the Seeds of Latin America!”.

The next day, Feb 21st, 2020, was the 86th anniversary of the National Hero and the General of Free Men and Women, Augusto C. Sandino. Although the day of his death, by tragic assassination at the hands of the Somoza regime is nothing to celebrate, Sandino’s legacy and influence on the modern-day Sandinista movement is celebrated throughout Nicaragua. In particular, his marriage with Blanca Aráuz is remembered. The delegation arrived that morning to San Rafael Del Norte, the birthplace of Blanca Aráuz, as well as the city where Sandino and Blanca were legally married. The delegation joined a large crowd of community members, seated in front of Blanca’s home, for a re-enactment of Sandino’s arrival to San Rafael del Norte, his marriage to Blanca Arauz, and his departure for the mountains to fight off the US Marines, and a series of speeches from prominent community leaders, including the Mayor and Political Secretary of Jinotega, Leonidas Centeno.

Centeno spoke for almost half an hour, not only honoring the legacy of Sandino, but directly addressing the misinformation campaign around the crisis and coup attempt of 2018, and standing by the consistent improvements in healthcare, road infrastructure, electricity, agrarian reform, and education made by the Sandinista government. The powerful speech ended on a hopeful note, to fight for “a better Nicaragua, a free Nicaragua for our grandchildren; without dependence on anyone…Long live the Sandinista Front! Long live Daniel Ortega!”  Throughout his speech, he named the Sandino Vive! delegation group, citing the importance of having international visitors come to Nicaragua every day to see with their own eyes a country that is working and living in peace, and carry these images back to their homes to share with others. The delegation was invited to lead a procession after the main ceremony. Carrying the flags of the ATC, Nicaragua, Cuba, Bolivia, and Venezuela, the international brigade symbolically led the procession around the town center, ending at the statues of Augusto Sandino, next to the revolutionary commanders Carlos Fonseca and Tomas Borge Martinez. From medical support, to coffee harvests, to literary crusades, to now; this procession continued a legacy of international solidarity with the Sandinista Front in the year 2020.

After lunch, the delegation visited the small town of La Concordia where another commemorative ceremony was taking place, and finished by walking through the family home of Benjamin Zeledon, the liberal general who was killed by the US Marines in 1912 in Coyotepe. The young Sandino was greatly impacted by the image of his body dragged through the streets of Masaya by the US Marines. At Zeledon’s home, Concordia’s vice-mayor and a city council member encouraged us to read the last letter that the General wrote to his wife before being killed, where he says that the duty of all Nicaraguans is to struggle until the end of the freedom and sovereignty of the country.

That afternoon, the delegation returned to Managua, for the final day of the delegation, where they would take time to reflect on what they learned and how they would share experiences with their communities. To wrap up the day, delegates enjoyed the bustling Masaya Market, and the breathtaking overlook of Catarina, where Sandino was known to spend time reflecting.

Source URL: Friends of the ATC